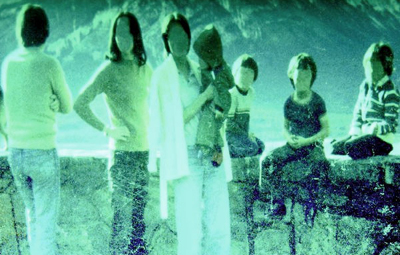 Gravenhurst has transformed into an atmospheric, post-rock leaning group in recent years, having expanded their sound into expansive sonic territory on albums such as Fires In Distant Buildings and The Western Lands. Yet Gravenhurst began their sonic journey with Flashlight Seasons, an album of melancholy British folk-pop that was as dark and as chilling as it was beautiful. Nick Talbot’s compositions are reminiscent of Nick Drake’s pastoral, finger-picked tunes on tracks like “I Turn My Face to the Forest Floor” and “Fog Round the Figurehead.” All the while “Bluebeard” is a catchy single with traces of The Smiths. It only gets more haunting from there, which makes it one truly stunning debut. – Jeff Terich

When Jamie Lidell joined the Warp Records roster, he was coming to the label as an artist who once specialized in electronic music. Yet once he actually released something on Warp, he had gone into another direction entirely, instead issuing an album of funky, filtered soul. Multiply was one hell of an introduction for British singer, who channeled Prince in songs like “When I Come Back Around” and “Newme,” while echoing the old school sounds of Sam Cooke and Otis Redding in the title track. Jamie Lidell has since become one of the biggest acts on Warp, as a few of his songs from his follow-up album Jim found their way into department store commercials. And quite frankly I don’t blame advertisers for seeking him out; with music like this you just can’t help but feel good. – Jeff Terich

By 2005, Warp Records had spread out into a variety of directions, having embraced hip-hop, dream pop and numerous variations on dance music, but still, the weirdest thing for them to have done was put out a rock record loaded with guitars. But, as it turns out, it was far from out of bounds, as Maxïmo Park made their debut with a wiry, spunky post-punk inspired Britpop album that year. A Certain Trigger stands up strong against the debut records of The Futureheads, Kaiser Chiefs, Dogs Die In Hot Cars and The Arctic Monkeys, and had a more monstrous single than all of them with “Apply Some Pressure” (monstrous in sound, not popularity, just to clarify). That the album also came loaded with great tracks like “Limassol” and “The Coast Is Always Changing” just made it that much more of an exciting new discovery. – Jeff Terich

For a label that has built its fame on avant garde music and sounds that push the limits of genre and structure, it’s not said enough that Warp has been the name behind some of the decade’s most salacious and pleasurable dance records. One such name in sexy, stylish beatmaking is Detroit producer Jimmy Edgar, a man whose claim to fame comes both with his sense of humor and his sleek style, which pieces together disco, Detroit techno, IDM and R&B in an irresistible package on Colorstrip. On dancefloor banger “My Beats,” Edgar takes a stab at Prince-like electrofunk, while “I Wanna Be Your STD” is spacious, throbbing, stutter-step downtempo made more tantalizing with Edgar’s bedroom voice narration. Like a hornier playboy cousin to Junior Boys’ emotional dance pop, Jimmy Edgar is in a champagne popping class all his own. – Jeff Terich

Sacramento-via-New York disco-punk troupe !!! had previously made some badass funk on albums like Louden Up Now, but with the release of third album Myth Takes, the band had essentially perfected the bass-thumping post-punk-funk they had been finely honing for the better part of a decade. With Myth Takes, !!! stormed out of the gates tighter and more kickass than ever, finally capturing the intensity of their live shows in one funky motherfucker of an album. Myth Takes is certainly the band’s best, not just for the bass-heavy singles such as “Must Be the Moon” or “Heart of Hearts,” but for their more playful moments as well, such as the title track, which incorporated surf guitar riffs into a super-cool funk romp. I’m still waiting to hear how the group plans to follow up something this awesome. – Jeff Terich

Battles’ first few EPs were interesting on paper—complex polyrhythmic grooves, prog-rock shenanigans, glitchy electronics—but they lacked a purposeful cohesion, and for a while the band was best known for its ‘ex-members of Helmet and Don Caballero’ tag. No one was ready for the monster of a debut full-length that was Mirrored. Here, the band assembled its disparate parts into an almighty sum, and the once-instrumental group found its voice (which admittedly borrows a bit from Animal Collective) in the process. Forget genres like ‘math rock’ and ‘prog.’ This album sounds like nothing else. It’s courageously bizarre and yet instantly accessible. You have to be soulless to listen to it without wanting to shake your ass, even if the music itself sounds like it was crafted by machines. Organic and synthetic, funny and unfeeling, spontaneous and calculated—few albums are able to get away with such contradictions, but Mirrored makes it look like child’s play. No one’s even bothered trying to catch up to it yet. – Eric Friedman

Between 2005 and 2007, Los Angeles hip-hop producer Flying Lotus had turned some heads with a series of futuristic, abstract EPs that married the whimsical sonics of fellow Angeleno Daedelus to the glitchy electronics of Prefuse 73 and the static-ridden beats of J Dilla. By the time he made his way to Warp, with debut album Los Angeles, FlyLo presented a dingy and dark tribute to his hometown, one heavy with fluttering atmospheric affects and a warm crackle just barely offsetting sputters of noise. Yet for as strange and unsettling an album as Los Angeles is, it’s strangely approachable. The exotic strut of “Camel” is hypnotic and funky, while “GNG BNG” bumps like ’70s TV cop themes through a Nintendo filter and “Parisian Goldfish” bangs hard with spastic club appeal (and with its own disturbing, nigh-pornographic video to boot). To sum it up glibly, but truthfully, Flying Lotus is the future of hip-hop. – Jeff Terich

One of the most truly unusual bands making music today, Gang Gang Dance doesn’t really fit into any comfortable category, genre or classification. They make dance music, but it doesn’t exactly sound like music. And they sort of make pop music, but without any regard for what pop music is supposed to sound like. On Saint Dymphna, the Brooklyn group best displays their odd blend of disco, ambient, art-rock, psychedelia and improvisation in their most incredible grouping of tracks to date. “First Communion,” which is a single, twists and turns like !!! sideways beneath Lizzy Bougatsos’ manic shrieks. And “House Jam,” which isn’t a single but should be, is the band’s most gorgeous pop song, blending Kate Bush-style art pop with chopped-up samples and stadium synths. They may be a group of artistic misfits, but at Warp (in the U.K. at least) they seem right at home. – Jeff Terich

Perhaps it’s premature to include a 2009 release (let alone two!), but if you’ve heard Veckatimest, and most of those reading likely have, then you’ll understand its rightful slot on our list of Warp’s 20 essential albums. Taking the masterful, psychedelic folk sound of Yellow House and stretching it into more pop-friendly realms, Veckatimest is a truly amazing album, even for a band that had floored fans and critics just two years prior. Where Ed Droste, Daniel Rossen, Chris Bear and Chris Taylor had previously crafted a work of haunting beauty and dark mood, their second album for Warp found them stepping into the sunlight a bit and turning out perfect pop songs like the bouncy single “Two Weeks,” the Latin-tinged “Southern Point,” baroque ballad “All We Ask” and scruffy rocker “While You Wait For the Others.” As unlikely as it may have seemed for the band to make an album even better than their first as a four-piece band, that’s exactly what they did. – Jeff Terich

Bibio, one of Warp’s newest signings, owes much of his warm, uneven style to the nostalgic electro of Boards of Canada, so it seems only fitting that our feature end here. Stephen Wilkinson’s lap-pop flourished into a richer, more melodic and layered sound on Ambivalence Avenue, one of the best scruffy British indie folk(tronic) albums I’ve heard since Badly Drawn Boy first teamed up with a four-track. In just the first two tracks alone, Wilkinson creates a gorgeous and lovable sound, plucking a crackly and gorgeous anthem on the leadoff title track while he goes a bit funky on the quirky “Jealous of Roses.” It’s that rare album that sounds just that much better with each listen, and a strong addition to the Warp legacy. – Jeff Terich