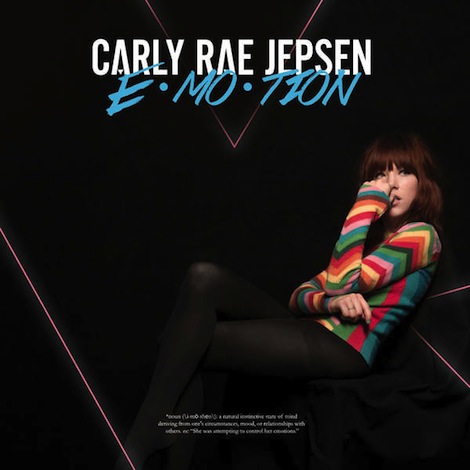 Carly Rae Jepsen’s “Call Me Maybe” is a near-perfect pop confection—the earworm with which she’ll be forever associated, the paean to young love, the meme-ified masterpiece. But the follow-ups are not on anywhere near the same tier. (Jesus—the one with Owl City…) The album it’s on, Kiss, is basically forgettable because it’s so saccharine. She seemed a likely candidate for a semi-anonymous career.

All of this is why Emotion is such a welcome surprise, a giant step forward for Jepsen in which she creates perhaps the most euphoric pure pop music of the past decade. It’s akin to having a dopamine IV in your nearest vein. This is why some people hate Carly Rae Jepsen, because that’s the mood she’s almost always going for, and when it doesn’t work—as on most of Kiss—it can be exhausting. Emotion is exhilarating.

Think about the last time you initially realized you’d fallen in love, or were infatuated past the point of simple lust, or even just in that giddy early stage of “like”—whatever the fuck that word really means—that all of us feel. That moment of clarity and comprehension and emotional supernova. Pop songs have been trying to distill and communicate the experience that moment for goddamn decades, and they fail more often than not. Jepsen’s love songs on Emotion don’t fail. They perfectly nail the emotional sensations of that moment.

It’s crazy how well they nail it, in every aspect, from the timing of vocal multitracking on hooks to the way Jepsen enunciates one word in a line different from any other in arresting fashion and the manner in which a four-note synth riff rings out in the midst of a spare, seductive arrangement. Listing all the examples would take forever. It’s better to just say that the opening run of tracks, starting with “Run Away With Me” and ending with “All That,” might be what we should list in a musical dictionary next to the term “perfect pop.” The former in particular, Emotion’s second single, is one of the best songs of this year, and if it’d been better promoted might be a massive summer hit.

Much of the reason why Emotion succeeds where Kiss generally failed is Jepsen’s consistent vision. She clearly knew from jump how she wanted the entire record to sound, and she and her team went about finding collaborators who could make that happen. Everyone from Shellback—a graduate of the Max Martin Academy for Insanely Catchy Swedish Pseudo-Disco Pop Production—to indie songwriter/producers like Dev Hynes, Ariel Rechstaid, and Rostam Batmanglij, contributes the best and hookiest aspects of their respective styles. It all amounts to a pop record that accomplishes Taylor Swift’s stated goal for 1989—creating an ’80s synth-pop throwback—much more effectively than 1989.

The only places where the album falters are some of the non-love songs. “Boy Problems,” despite having dynamite bubblegum-funk production courtesy of Greg Kurstin and Sia, is too on-the-nose and a bit too corny. Basically, it fails to walk the line that most of the record’s songs succeed in walking. “L.A. Hallucinations” just isn’t a song style for which Jepsen’s suited—it’s a fairly weak critique of Los Angeles superficiality, commercialism and tabloid culture that we’ve heard a zillion times. That said, sometimes her efforts to play against type really work, like on the kiss-off title track.

I have no clue where Emotion and Carly Rae Jepsen fit in the current pop landscape. It follows exactly zero en-vogue genre trends (in terms of what’s charting) and Jepsen doesn’t seem to have any interest in playing the pop-war games and marketing blitzes of the Katys and Gagas and Swifts and Rihannas. “I Really Like You” has had some success, and that’s about it. (“Run Away With Me” would probably be in a Pretty Little Liars montage sequence by now, but ABC Family is low-budget as shit.) The fact that Jepsen’s label is pretending Emotion didn’t leak two full months ago, right when it was released in Japan, and sticking to this asinine one-preview-track-per-week promotional schedule isn’t helping the situation.

Record company shenanigans aside, Emotion is a phenomenal pop album, one I didn’t see coming at all. Carly Rae Jepsen has gone from a one-hit-wonder risk to a pitch-perfect chronicler of the universal, oft-sappy but nonetheless true feelings that come with falling in love. You can pretend you’re above it when you hear “Run Away With Me,” but you’ll literally be dreaming about it, probably in connection with some memory of early romance, in no time.