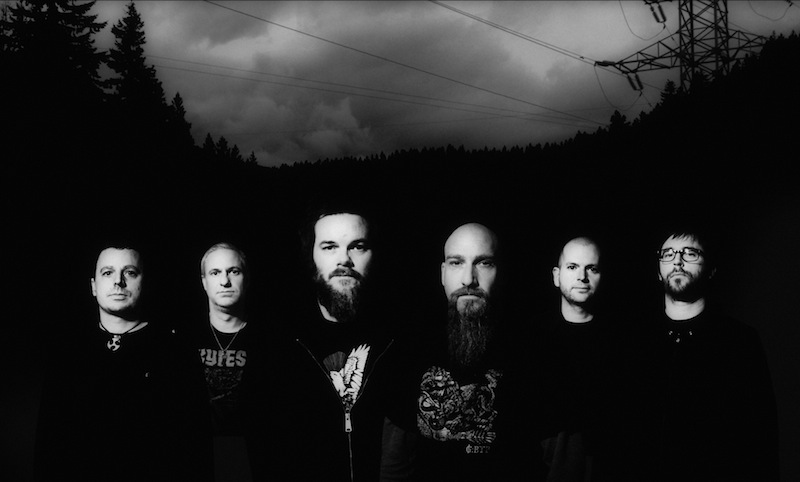 Twenty years ago, Neurosis changed metal forever by releasing their 1996 album Through Silver in Blood, a 70-plus minute exercise in spiritual exorcism that not only made them legends but helped shape how we now hear heavy music. That anniversary hangs heavy as we approach the release of the band’s new album, Fires Within Fires. And the release of that album comes sandwiched between two other notable anniversaries: Last year was their 30th as a band, while next year will be the 30th of their first release. Neurosis is hitting a lot of milestones these days.

That’s fairly remarkable when you consider Neurosis hasn’t lost any of the menace or drive that’s made them a singular band in heavy music. In their earliest days, they didn’t stand out so strongly, releasing a handful of crossover hardcore records that definitely were loud and fast, but didn’t necessarily set them apart as innovators. In the ’90s, that changed with their continuously evolving sound, growing bigger and meatier, and eventually terrifying in a strange and beautiful way. Moving away from the Bad Brains or Discharge influence of their early records, Neurosis began to move away from a more basic hardcore approach with influences taken from the likes of Swans and Godflesh, all the while exploring all of the open space between Joy Division and Black Sabbath.

Neurosis is as devastating and powerful as they’ve ever sounded, though they’ve covered a lot of ground and made a lot of very different records during their career. As we look forward to the release of their new full-length, join us as we take a journey through their catalog—every album rated and evaluated, from old-school hardcore to a new, frightening art metal future. 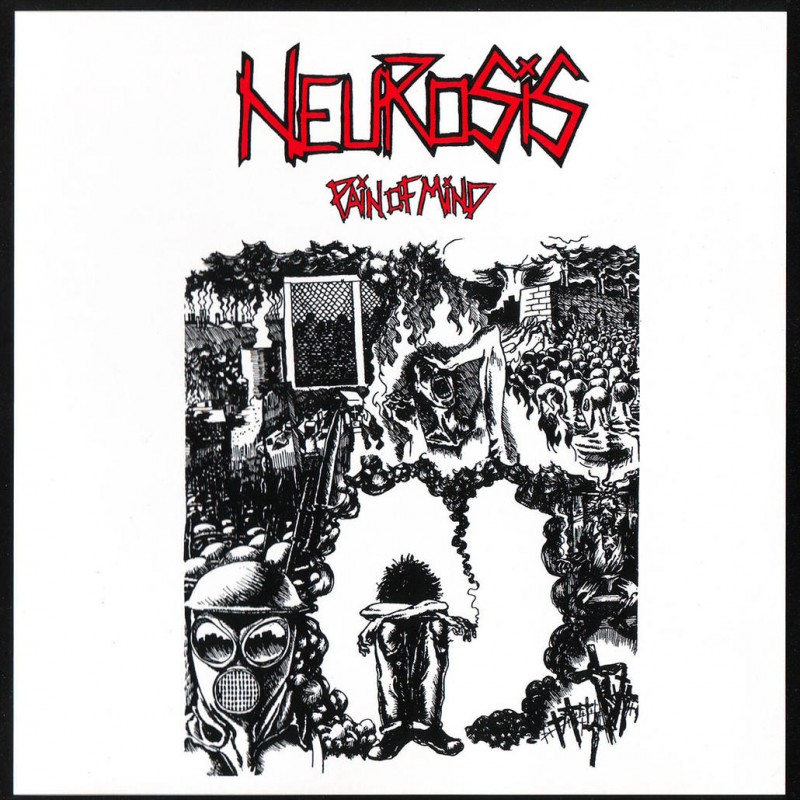 It’s a bit strange to imagine Neurosis—heaviest and most apocalyptic of metal bands—once sharing label real estate with Green Day, but Lookout Records was an outpost for all things punk in the Bay Area back in the late ’80s and early ’90s. And Neurosis was more of a punk band than a metal band in their earliest days, kicking up a crossover thrash dust storm that sounded a bit like Amebix, Bad Brains and D.R.I. engaged in a kind of messy, lo-fi hardcore battle royale. In that sense, it’s a fairly fun listen, though in context pretty unremarkable. It has its moments—the four-minute “Black” (which was pretty long for this version of Neurosis) incorporates some college rock guitar jangle into an otherwise loud and aggressive selection of bruisers. Pain of Mind isn’t a bad album by any means; put it on at a skatepark, for instance, and you’ll be stoked to shred the gnar or gleam the cube or whatever half-pipers said back in 1987. But it’s absent much that makes it memorable, and for that matter, doesn’t feel like a fully formed statement. It’s a loud, aggressive set of incendiary punk songs that do the trick quickly. It’s not bad, but it’s not the Neurosis as we know them today. 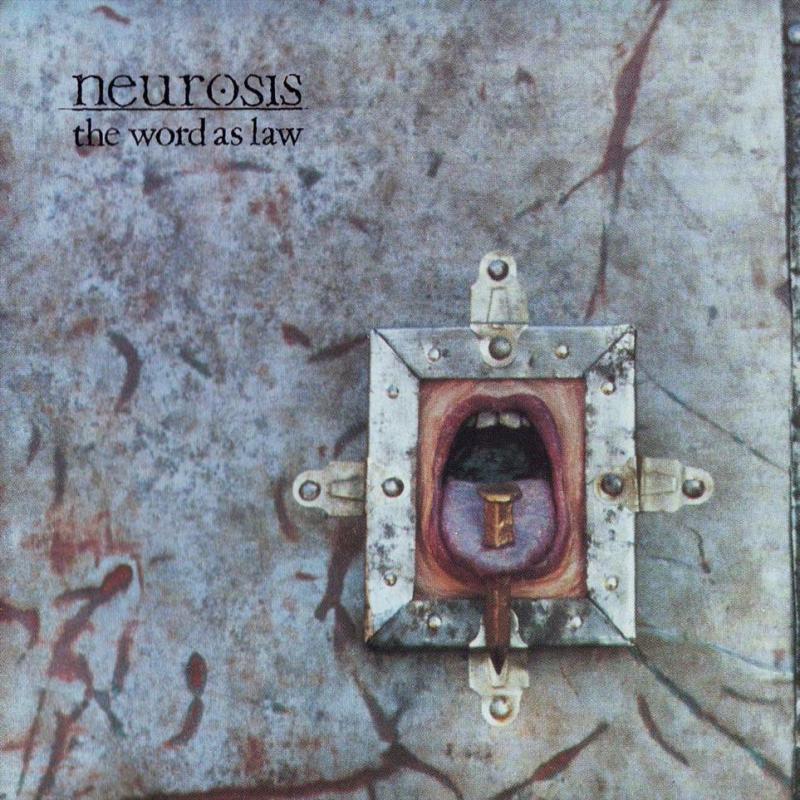 The Word As Law

The Word As Law is the sound of a band in transition. In a few years, they’d manage to set their sights well beyond the fairly limiting crossover thrash hardcore of their debut, yet without quite reaching full songwriting maturity. What that results in is an album that’s pretty long—hitting the 70 minute mark by just their second effort—yet by no means cohesive. There’s no reason for it to be this long; it has a lot of songs, and some of them are pretty good, but it’s a bit all over the place. A handful of songs cross the six-minute mark, offering signals that the Oakland band were interested in pursuing something more epic. Yet they’re frequently at their most memorable when keeping it concise—the 47-second insensitivity is the most fun part of the whole thing. (That sounds a little odd, given who we’re talking about; I enjoy listening to Neurosis a lot, but “fun” just doesn’t quite encapsulate what they do.) It wasn’t actually until the album was released with an EP’s worth of CD bonus tracks that their future direction started to become clearer. The final song on the tracklist is a cover of Joy Division’s “Day of the Lords,” and the combination of their hardcore brawny with a vintage goth-rock dirge is essentially the template for Neurosis songs to come. The last track, however, is a hidden 10-minute feedback exercise, the weirdness of which completes the picture sketched out in the track prior; doomsday sludge is a direction to follow for their songwriting style, but slow moving avant garde noise would be the sound design to put it in proper headphone context. They had the elements, they just had to figure out how to put them together. 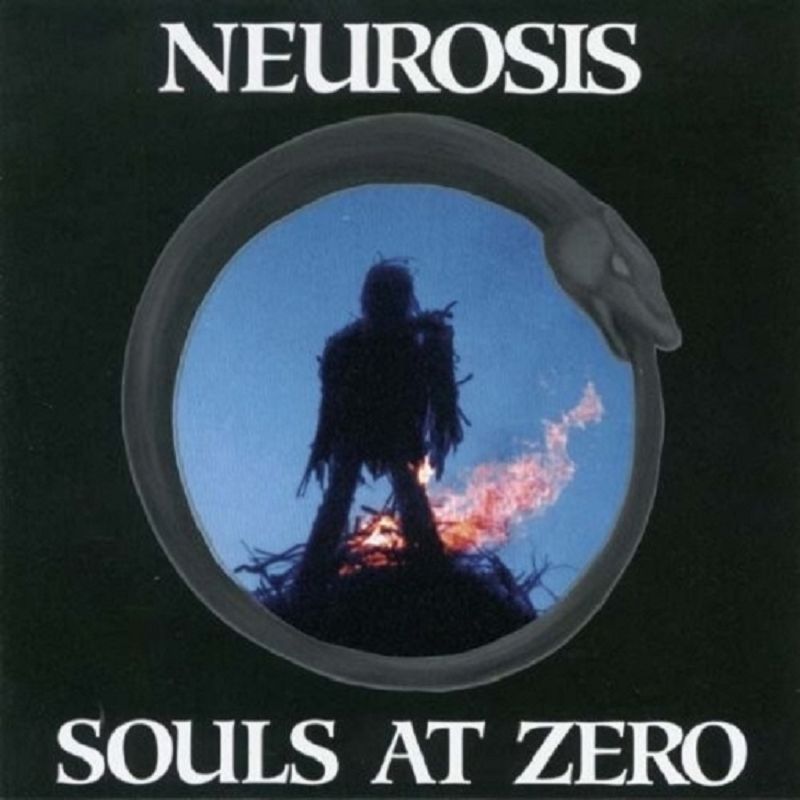 And after five years, Neurosis emerge fully formed, the ferocious beast of a band whose epic dirges have become a signature sound. This is the Neurosis that we know and do our best to understand today. (You can’t fully understand them—they’re too awesome and mystical a force for that, but we at least recognize the triumphant slabs of metal they create.) Informed as much by the churning and physical menace of Swans as the metal and hardcore that influenced their early records, Souls at Zero is at once deeply unsettling and wholly compelling. By slowing their pace and focusing on more intricate details, not to mention a deeper investment into melody and songwriting, Neurosis took a great leap forward through songs such as the gloomy post-punk sludge of “To Crawl Under One’s Skin” or the bad-trip psych metal of the title track. The increased presence of ominous samples and found sounds heighten the atmosphere of terror, and when the band is at their most ambitious, namely the terrifying centerpiece “A Chronology for Survival,” they’re essentially peerless. And this comes just a couple years after two middling hardcore records! I didn’t hear Souls at Zero in 1992, but much later after being won over by the awe-inspiring sounds of Through Silver in Blood and Times of Grace. Still, I can only imagine what it might have been like to hear it at the time. It’s a brutal piece of work. 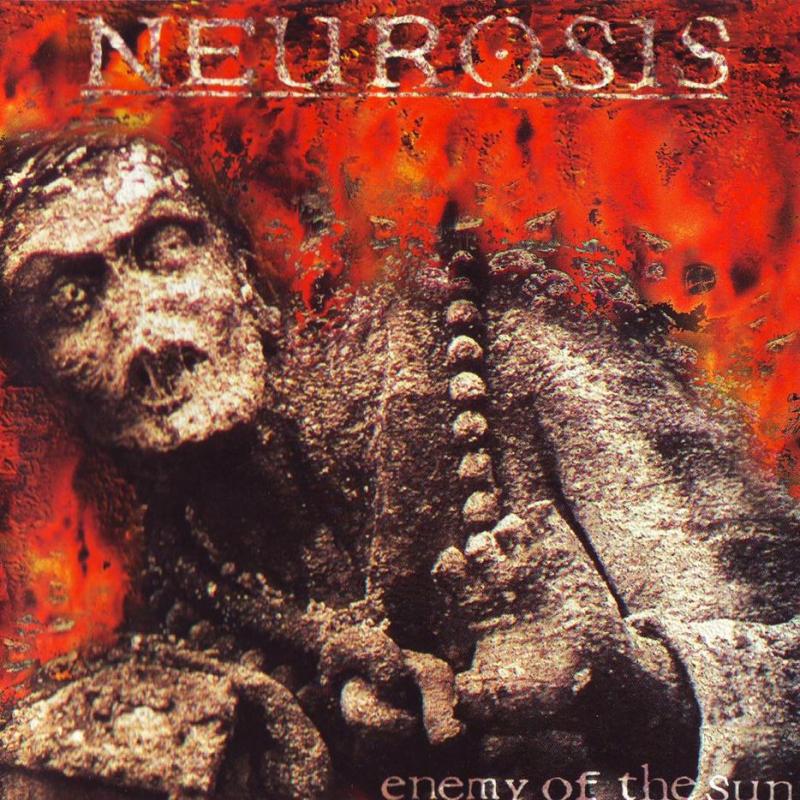 Enemy of the Sun

“Cleanse,” the final track on Enemy of the Sun, is a 26-minute exercise of tribal drumming, wordless chants and, um, didgeridoo. It’s a long track, with no guitars, and sounds more like something you’d hear in front of a raging pyre at Burning Man. That doesn’t mean it’s bad, but it’s probably going to be the determining factor in whether or not Enemy of the Sun is your kind of metal album. And to be fair, Neurosis certainly has a weird jam band vibe when it comes to the dedication of their fanbase (though not the music, necessarily, in spite of their song lengths). Yet, the rest of it is essentially classic Neurosis—riffs that shatter the ground beneath you, fearsome bellows, powerful melodic dirges and the curious addition of various non-metal elements, be it found sound or pianos. Yet “Cleanse” comprises a pretty big chunk of the album, so that still skews the percentage a bit. It’s an interesting parallel to the hidden track on Tool’s Undertow, which was released close to the same time, and metal and alternative rock worlds were starting to cross. Neurosis never flirted with commercial appeal, however, so instead of “Sober,” they deliver the white-knuckle intensity of “Cold Ascending,” which is as concise and incendiary a Neurosis song as you’re likely to hear. Enemy of the Sun is the point where Neurosis gives in fully to their endtimes tribe persona, while sounding their sludgiest. It’s an essential link between their early rawness and their later forays into epic soul-destroying art. 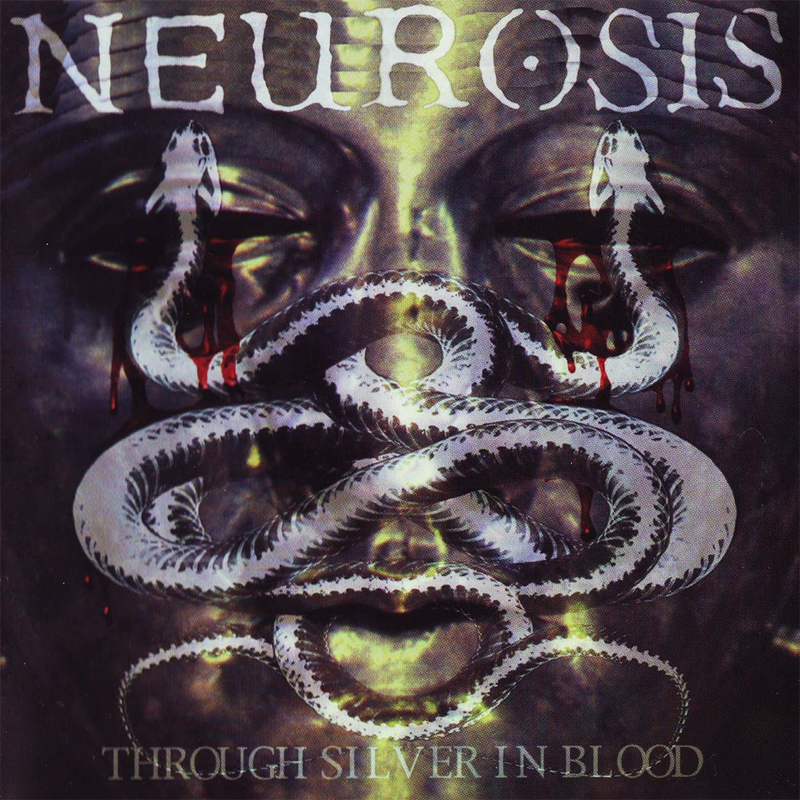 Through Silver in Blood

Boy, where to begin with this one… well, suppose you needed a soundtrack for the earth open up and swallow you whole. This is probably what you’d reach for. And suppose you needed an album to play to actually bring about such a cataclysmic event—this is still the album you’d reach for. It’s almost spiritual in its powerful, endlessly unfolding sludge metal dirges. To say that Through Silver in Blood is Neurosis’ heaviest album is perhaps an argument of nuance and degree, but it’s no doubt their most massive. The riffs alone—in just the title track no less, as well as more concise highlight “Locust Star“—are devastating like few metal albums can profess to be. But it’s not just the guitars or the drums that make the album a force of nature, though those certainly help. There’s a degree of industrial noise to it all that pushes the album into a genre unto itself. Previously I mentioned that the band shared some similarities with Tool. Here, they surpass anything that Tool was doing and essentially lay out a path for the future of metal. That’s not an understatement, either—listen to records by Mastodon or Isis, early Baroness or Kylesa and countless others, and you’ll hear Neurosis in that crunch. You can’t really overstate the importance of this album, because it’s groundbreaking in its display of physicality and supernaturalism. It’s a beast, but perhaps a mythical one with about a dozen heads that breathe blue flame. Wait, make that silver. 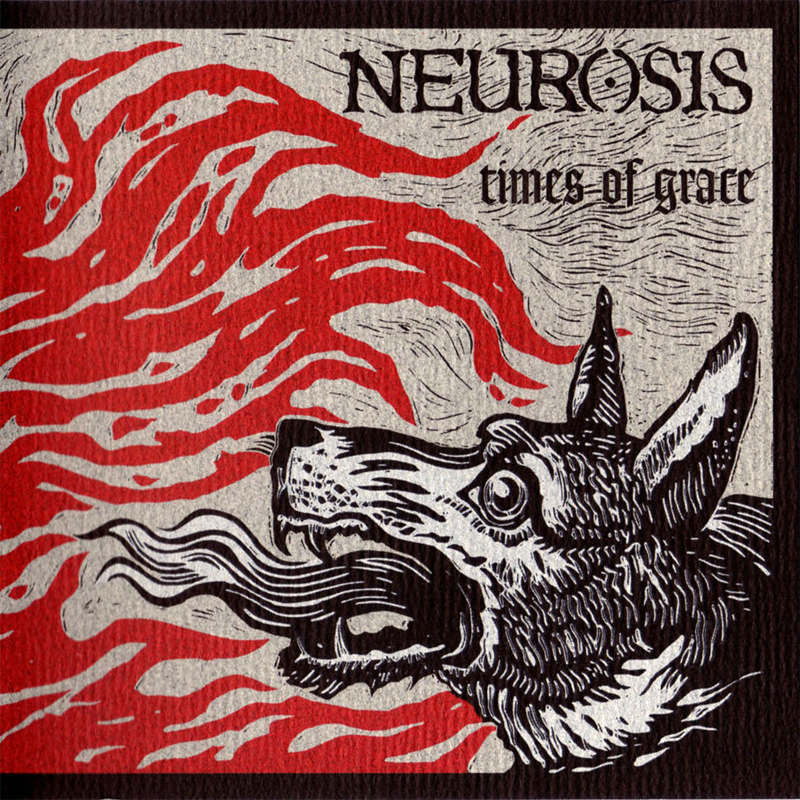 Every Neurosis album in its most intense moments can feel like the end of the world. But it’s all relative. For instance: Listening to pretty much any of them after Through Silver in Blood seems to lessen the sense of impending doom, if only a little bit. That album is a masterpiece of earth-swallowing terror. And so is Times of Grace, arguably, the band’s close runner up for best album. But being that this is their first recording with Steve Albini, the result ends up feeling a bit more raw and visceral. It’s menacing and direct, but not quite so terrifying. It is, however, incredible. It contains some of the band’s best songs, for starters, be it the emotionally draining dirge “The Last You’ll Know,” the primal pulse of “Under the Surface,” the restrained doom of “Belief” or the slow-motion catastrophe of the title track. It’s beautiful and brutal, and big. But it feels more like a live band crafting something together rather than a mystical work of supernatural forces. That’s the illusion of Through Silver, and it’s one I’d gladly take any time. But there’s something refreshing about the tautness of the performances here, the cleanliness of the recordings and the wonder of hearing one of the greatest metal bands that America’s ever known on top of their game.