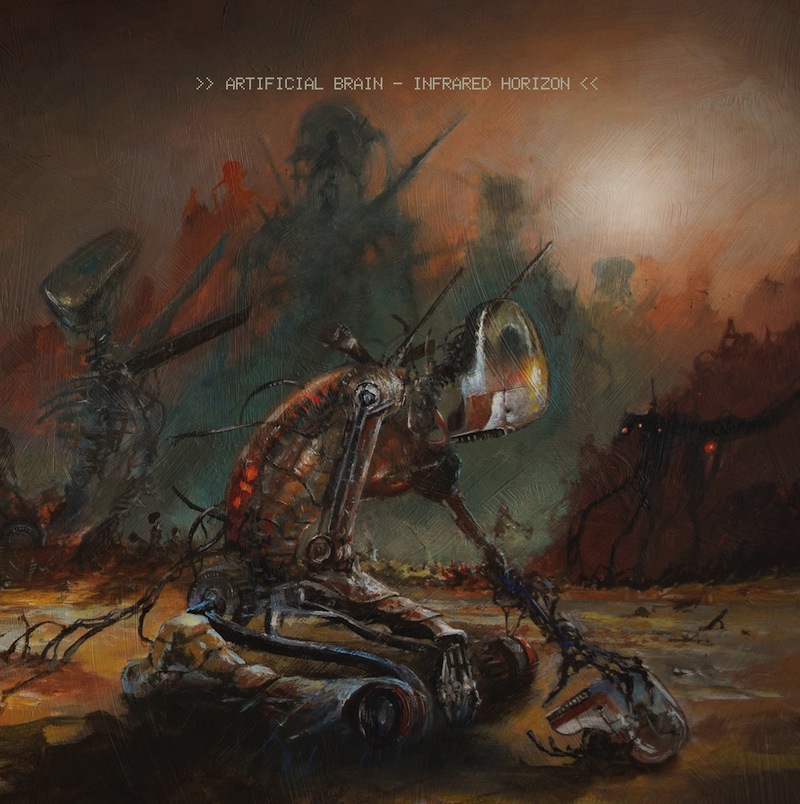 There is a moment in “Absorbing Black Ignition,” off of Artificial Brain’s debut record Labyrinth Constellation, where the promise of the band shines most brightly. It’s about a minute in and serves as the chorus riff; this wonderful, glimmering, shimmery riff, descending upper-register arpeggios offering a brief startling beauty in the midst of what is otherwise blasts and fretless bass and tremolo-picked dissonant extended voicing chords which are otherwise the bread and butter of more technical and progressively oriented death metal.

Technical death metal struggles often to achieve something close to an anthemic nature, to create those earworm riffs that wriggle through your brain and demand repeated attention. Extreme metal in general has this issue, sacrificing more obvious methods to memorability like clear and consistent melodicism, but at least typically has elements such as groove and energy to pull it through. Technical death metal goes a step further, subverting even these more obvious elements, playing up the abstract and the dissonant and the jarring. Dismembered riffing takes the place of more obvious progressions.

Making this powerful and memorable is an issue a lot of technical death metal bands face. There is a reason tech-death records tend to err on the short side, and that’s not entirely due to the technical difficulties in crafting and recording this kind of music. Songs can turn to riff salad in the hand in a heartbeat much easier for this type of extreme and progressive music, and too much riff salad for too long can turn a record into an incoherent jumble, undesirable, and without the power we tend to associate with the greatest peaks of both metal and progressive music.

Artificial Brain likely paid close attention to their genre, to criticisms of their first record, and to their overall songcraft, and it has paid off. Infrared Horizon’s thesis seems to be taking that moment within “Absorbing Black Ignition” and breaking apart what made it so compelling not only to critics but to listeners as well (it is at the time of this writing their second most-played song on Spotify, after the album opener). They seem to understand that those moments are made valuable by their rarity, by their contrast to overwhelming sonic violence around them. This is a key component of overall songwriting that tech-death bands can often overlook—one of dynamics.

Likewise the lessons of the mighty Gorguts and Voivod, gods in their own right in this realm, are put to use; that dissonant and extend chords add an almost necessary flavor but must be embedded in key places within the rhythm of a riff and within a context rather than becoming the sole tool in the bag. The tempos are more varied here than before, both within songs and between them; they avoid the cliches of tech death, with high-flying and acrobatic, higher-register shred solos, instead crafting the kind of broad voicings and more chord-driven solos of progressive rock enhanced with death metal tonality and attack.

It’s odd to say, given the style, but Artificial Brain choose not to color outside the lines too much on this album. It is very much a second album, in the sense that they have taken their admittedly excellent and promising debut and worked to incorporate more moments and dynamics similar to those most successful on Labyrinth Constellation and to phase out the less successful elements. This is less a revolutionary tech death record and more an extremely good one and demonstrates aptly, not unlike River of Nihil, Ulcerate or Deathspell Omega’s recent work. What’s more, it sets them up on exceptionally stable and fertile ground for something greater in the future.