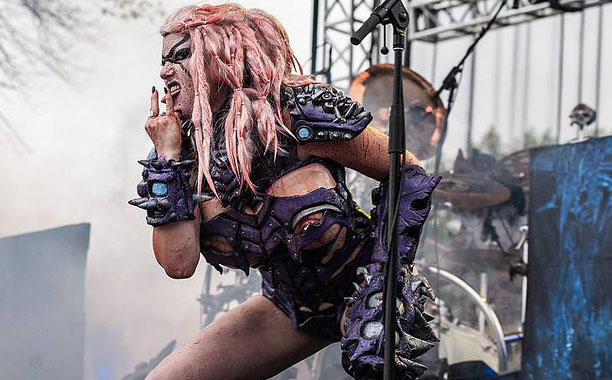 Metal lovers everywhere were shocked by the death of Dave Brockie (AKA Oderus Urungus, the delightfully disgusting front-alien for shock-metal titans GWAR) earlier this year. But, just as Brockie would have wanted, the band made the decision to jump right back into their touring schedule, recruiting former GWAR bassist Michael Bishop to play the part of vocalist as a new character named Blothar.

Now, just a short while before their tour kicks off, GWAR have announced the addition of a new female character named Vulvatron. This is not the first time that the band has boasted female members on tour – they’ve had a fair share of women serve as back-up singers and dancers in their past – but it is the first time the band has let a woman take the stand as a leading personality during their live show. And, according to recent show reviews, Vulvatron (played by designer/musician Kim Dylla) more than fulfills the obligations of a GWAR member: she’s grotesque, she’s in your face and – most importantly – she’s really, really fun on stage. Check out a photo of Vulvatron above, and upcoming GWAR tour dates below.