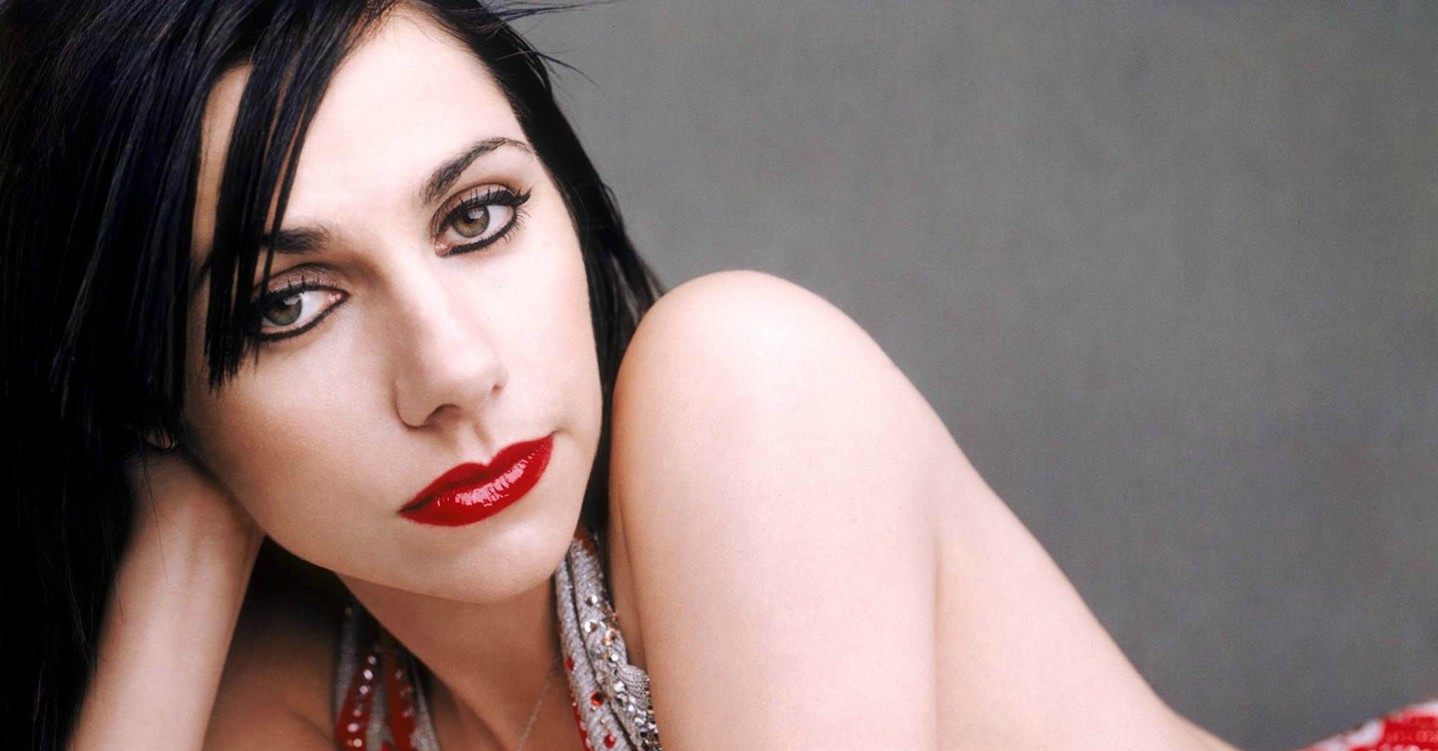 For 20 years, Polly Jean Harvey has proven herself as rock ‘n’ roll’s Queen(ie). Her musical talent rises 50 feet tall, and almost every one of her songs bleeds raw emotion. Harvey is also known for relentlessly pushing limits. Across all nine PJ Harvey albums — I’m counting 4-Track Demos — not one has sounded like the one that came before it. She’s covered almost the whole spectrum of rock, from blistering punk to hazy folk, and alt-rock to tear-jerking torch songs. Harvey’s contralto vocal range can go from an uncomfortable screech to the most beautiful and mesmerizing voice you’ve ever heard. She can lift you off your bed and kick you in the face, or sing you to sleep after telling you to fuck off. Harvey is an underrated guitarist, imaginative lyricist, and above all, an innovator. No one really knows what PJ will do next; her artistic expression is sometimes rather bizarre — even uncomfortable — but that’s why she’s magnificent. Harvey keeps us on the edge of our seat, and then surrounds us in lovable bliss. She has beauty, class, and a fire burning in her gut that can turn this writer into a pile of rubble.

I heard her moan 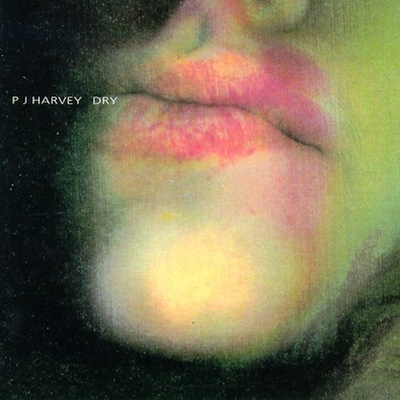 This introductory statement — which earned Harvey contract offers of up to $400,000 — seemed of a certain kinship with the burgeoning riot grrrl movement, which is interesting; Harvey was geographically removed from the Pacific Northwest in the depths of Britain. Knowing her artistic persona and politics, she most likely didn’t care what other female musicians were doing at the time, though after Dry, she began to be idolized anyway. Harvey is the center of any record she ever touches, but Rob Ellis (drums) and Steve Vaughan (bass) make for a talented rhythm section, rising Harvey over their shoulders for 40 minutes. Dry is emotional, muscular, but the music takes a classically deranged turn during “Plants And Rags.” The acoustic come-down is refreshing, and the strings take the album to a paranoid place. However, it’s not long until Harvey is walking on “Water” and playing more crunchy blues; she ends the album screaming for water. Dry isn’t fully formed, but it catapulted PJ Harvey into greater territory. It’s only appropriate that Dry‘s best song is a confidence booster called “Victory”; it’s a winner from start to finish. 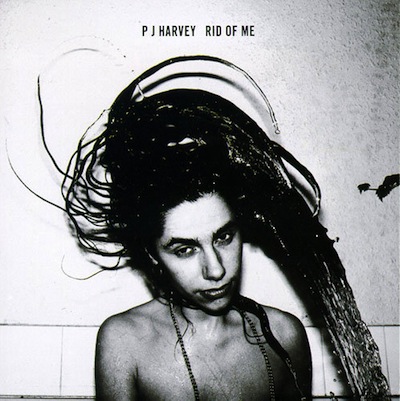 Rid of Me would be Harvey’s finest album if it weren’t for the awkward logjam of “Man-Size Sextet” and “Highway ’61 Revisited,” which is an unnecessary Bob Dylan cover given the high caliber of original material here. Cut those sixth and seventh tracks off the record, and we have a perfect set of 12 passionate songs, so flawless in fact that the blip of “Man-Size Sextet” and “Highway ’61 Revisited” is almost forgotten. The first five tracks of Rid of Me — “Rid of Me,” “Missed,” “Legs,” “Rub ‘Til It Bleeds,” and “Hook” — can stand up to any opening album run in the recorded history of rock music.

The rhythm section of Ellis and Vaughan hits with even more thump and precision than the previous album due in part to Steve Albini’s masterful engineering work. The band was shacked up in Albini’s Minnesota recording compound in the middle of winter, and the wretched cold hangs above the record; the walls in the recording room are about to crack wide open. Albini makes Harvey sound relentlessly fierce, immediate, and as awesome as it sounds, Harvey would never resort to his prowess again — this toil could never be outdone. The quiet/loud mastery of “Rid of Me” (“Lick my legs, I’m on fire / lick my legs, I’m desire”) feeds into “Missed,” a painful track that’s also quite beautiful, and then into “Legs,” which has Harvey moaning about how divine her lost love was before she lost him (“You were going to be my life, damn it!”) over guitar strings that sound like actual vines being pricked apart. “Did you ever wish me dead?” Harvey asks as mournful strings come out of the ether. She pauses, only to end the track with this devilish offering: “I might as well be dead, but I could kill you instead.” The build up during “Rub ‘Til It Bleeds” is otherworldly and intense as bricks fall on Ellis’ floor tom, exploding into a guttural grinding jam that speaks nothing but bloody sexual tension. Harvey’s guitar on “Hook” sounds like an actual fishhook as drums crash like aluminum trash can lids.

Rid of Me is deranged, badass rock ‘n’ roll that leads to multiple, obsessive listens. The album is painted in heavy blues, and rips the popular early ’90s grunge sound to fucking shreds. “Ecstasy” is the closing, heralded statement, Harvey’s slide guitar ripping up and down like a bungee chord. “Ecstasy, I’m in it!” she exudes, and she couldn’t be more right. 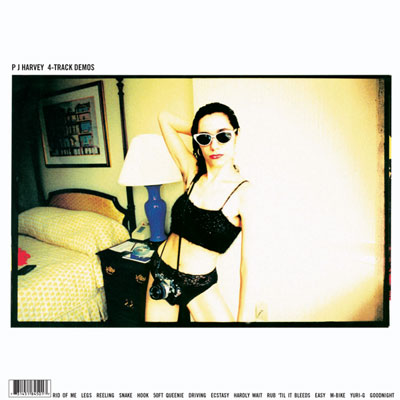 There is a bit of irony that comes with this release. With the eponymous PJ Harvey trio all but disbanded when 4-Track Demos came out, here is Polly Jean sitting alone in her room with her guitar, compelling voice and miscellaneous other sounds. Indeed, this collection of eight Rid of Me demos and six unreleased tracks (“Reeling,” “Driving,” “Hardly Wait,” “Easy,” M-Bike,” and “Goodnight”) was recorded long before Rid of Me came out, but it’s fascinating to hear Harvey by herself, commanding and creating her art. This is where Harvey’s lyrical and vocal talent shines; some vocals on Rid of Me were buried under relentless noise, but, here, you can hear everything. The six unreleased songs are excellent, and some of the demos (“Hook,” “50 Ft. Queenie,” and “Yuri-G”) are almost better than the final products. “Reeling” has one of Harvey’s most hilarious (and sorta icky) lyrical turns (“I wanna bathe in milk, eat grapes, Robert De Niro sit on my face”), but she sings it with such seriousness. Final track “Goodnight” will have you floating in the stars and the trees thanks to a slow burning slide guitar. From early on in her career, Harvey wasn’t messing around. 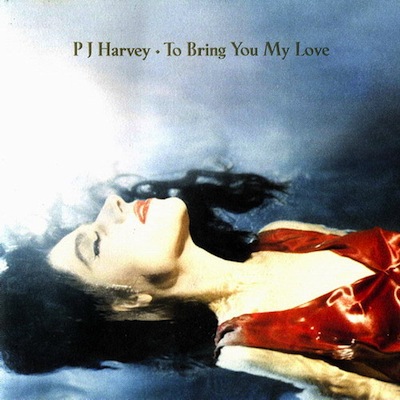 Fully realized as a bluesy queen, To Bring You My Love brought Harvey to icon status, even if she wasn’t yearning for it. It’s a richer, fuller album, with some added danceability for good measure. Gone is the seething, angry vocalist of Rid of Me, and in her place, a dark diva with a wider range of emotions and approaches. Her vocals were amazing before, but, now, there’s even more range and inflection. The pulsating bass on tracks like “Working for the Man” and “Down by the Water” could make knees buckle and arms sway. To Bring You My Love is more melodic than Harvey’s previous work, and her voice carries the harmonious torch even further, with some added help from producers Flood and John Parish. Harvey’s buzzy elements haven’t vanished altogether (“Meet Ze Monsta” and “Long Snake Moan”), but there’s a whole world explored beyond her punk origins. The passionate acoustic track “Send His Love To Me” locks her majesty in a cell (“This house becomes a hell”), and Harvey may cry (“The Dancer”), but she’s not broken. For an artist known for pushing boundaries, PJ Harvey pushes past even her own limits on To Bring You My Love. It’s Harvey’s best album, and greatest leap forward. It’s beautiful.