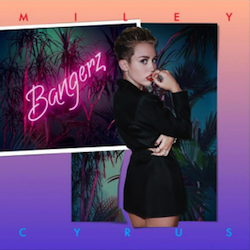 Hannah Montana didn’t die with Miley Cyrus’ first twerk, but at that point the profane elegy was already written. The lethal blow most likely occurred sometime in 2012, when the former child pop star cut and bleached her hair and subsequently showed up on prime-time, lowbrow ratings grabber Two and a Half Men. Not that that did anything to wipe “Party In the U.S.A.” from our memories — it’s still probably the catchiest thing Cyrus has ever recorded. No, to rebrand herself, Cyrus had to go big — hot pants and foam finger big. Terry Richardson-shot camel-toe big. Diamond grills big. Getting naked on a very literal wrecking ball big.

That Miley Cyrus resorted to an exaggerated, sexualized image isn’t necessarily a surprise — when you need to shake off the scent of Disney, you resort to extreme measures. The irony is that her newly uninhibited, mostly-naked persona seems to whiff on actually being sexy — it’s cartoonish. (And as some have pointed out, maybe a little racist.) Halloween is just around the corner and I’m confident in saying that you’ll definitely be seeing lots of women and men in Miley get-ups at parties.

So, Miley’s a meme now, more so than a musician, which is kind of how it’s always been for her — the context is just a bit different now. She’s an adult, and as such she’s made a shift from tween-friendly pop to a more grown-up version of that very same kind of pop, augmented with Dirty South beats, lots of sex and drug references, guest raps and songs about grown-up relationships (sort of). The vessel for this updated version of Miley is Bangerz, a big-budget set of beat-heavy tracks that certainly drive the point home that Cyrus has entered a new phase — a fascinating, frustrating and altogether strange new phase.

Featuring production by the likes of Pharrell Williams, will.i.am and Mike Will Made It (whose name is dropped on almost all the songs he produces), Bangerz certainly fits in comfortably alongside most charting pop records right now. It’s an album very much of the present, and maybe the album that Cyrus had to make. But here’s the problem — it’s not very good.

There was promise enough with second single “Wrecking Ball” that Cyrus wasn’t just emphasizing that adulthood means autonomy, but actually a more mature sensibility in terms of the material she’s performing. Likewise, opening track “Adore You” and the dark, buzzing “Drive” emphasize more range than Cyrus has ever shown in the past. But these three tracks are the exceptions rather than the rules. Bangerz is more attitude than execution, Cyrus and her production team throwing everything at the wall without seeming to care whether or not any of it sticks.

First single “We Can’t Stop” is by no means the worst song on the album, but when Cyrus drops lyrical humdinger, “To my home girls here with the big butts, shaking it like we at a strip club,” she gives a preview of the more egregious missteps to come. Sensory overload firebomb “SMS (Bangerz)” is Cyrus’ half-hearted attempt at co-opting Ke$ha’s glam-sleaze and Nicki Minaj’s spastic art-rap. And, unsurprisingly, it feels cheap, a pale imitation of two well established artists rather than a representation of who she is. Not that we ever really do figure out who she is. The frankly confusing “4×4” pairs Miley with Nelly on a quasi-ranchero hoedown with even more gold-star lyrics: “Drivin’ so fast I’m about to piss on myself.” I’m not an expert but that sounds like something best kept between you and your urologist.

Pharrell’s funky production almost saves “#GETITRIGHT” but we should all know better than to trust a song that begins with a hashtag. “F.U.” is a temper tantrum disguised as a torch song. And “Love Money Party” repeats the three words in the title so many times, I can only reach the conclusion that ideas were running pretty low by the time Cyrus and Mike Will Made It reached this song in the studio queue. By and large, that’s not necessarily an issue that afflicts the whole of Bangerz. There are a lot of ideas on this album, it’s just that most of them aren’t new or particularly interesting ideas. Miley Cyrus seems on the verge of becoming an interesting artist, but when the songs themselves don’t go much deeper than the publicity stunts she commands, then it’s not any easier to take them seriously. At this stage in its evolution, there’s absolutely no reason why a mainstream pop record should be nothing more than a collection of singles amply insulated by filler. Too bad that’s exactly what Bangerz is.