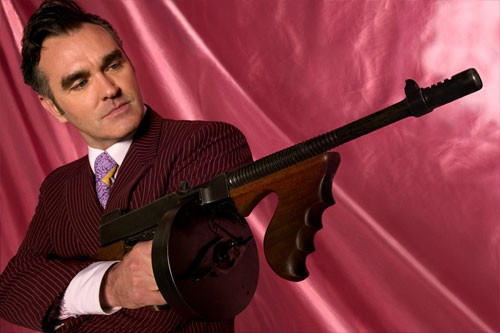 Let me start off by saying I am not a disciple in the church of Mozzer. You could say I once was, long ago, then l lost faith in him but some how I found my way back. But not all the way—let’s just say that Morrissey and I have a complicated connection; distant but very respectful.

This is a story that is oh-so familiar to most, of how a Latino teen found guidance and refuge in the music from a band and a man from Manchester. I can tell you when it happened, the moment I became a dedicated follower of Morrissey and The Smiths. It must have been sometime in the late 1980’s, as I was in the back of my older hermano’s car. He was driving with his then girlfriend in the passenger seat. She would always bring her music in his car, trying to get him to listen to cool new bands.

I still remember crouching down in the back seat as he drove, I could see the stars from where I was sitting. The windows were rolled down and it was another cool summer night in old San Antonio, Texas. Then it happened: I heard the words that changed my life forever.

As soon as I heard those words, I finally felt like someone understands my life and how I feel. How could it be? This voice, this guy with an English accent could perfectly articulate how it feels to be an outsider not only in your own city, your own country and your own ethnicity, but also in your family. Whoever this person was, he understood the infinite complexities of my life.

“Who is this?” I asked getting up feeling the wind caressing my face as I heard the music wash over me with a melancholy-like calmness.

“It’s The Smiths…” my brother’s girlfriend said handing me the cassette cover. (Yes it was that long ago, remember when we would all go by the latest tapes and play them over and over until they warped on our tape decks. This was a more innocent time in our lives before CDs and MP3s.) I remember staring at the green cover, opening up the sleeve and trying to figure out who sung this song? It was some band called The Smiths. The singer was Morrissey, the song was called “There’s a Light that Never Goes Out,” and I was mesmerized.

That night opened my eyes. I was still trying to find myself and my place in the world. I still had yet to find my voice, but somehow the singer in that song shined a light that would never go out. It may have faded but it will always be there. I still remember that moment like I remember my first Valentine kiss with Laura in third grade or my first apartment in New Orleans; it meant that much to me.

That’s what you call powerful music and I feel The Smiths were my Beatles of my generation. Think about it, the sixties were all about peace and love. Okay, so the eighties were not so peaceful and not so lovely. The eighties were a decade of fear the bomb and depression of life and spirit. The Smiths reflected those times and gave us hope with the voice of my generation, Morrissey.

That’s when it began for me, Morrissey and I and our complicated connection. Like any other friendship or relationship I’ve had in my life, we’ve had our ups and downs. There were times that I just couldn’t listen to him. I couldn’t because what he sang, with his songs in The Smiths and much later, rang with too much truth that I couldn’t handle. But I always went back, to Morrissey and The Smiths; how could I not? They were there for me when I needed them most in those years of confusion and rebellion that all teens go through. But I could especially relate to his lyrics, being a Latino in America.

For the sociologists reading, I am going to explain to you why Morrissey and The Smiths make such an impact in Latino culture. As you may know, great artists in any field have a universal voice that anyone woman or man from any part of the world can understand. For example, The Beatles are popular because they sang about needing love. Love is a universal emotion that we all, as humans, strive for.

The Moz and The Smiths sing about loneliness, heartbreak and feeling alienated. Who in this world hasn’t felt out of place and alone in this world? We Latinos are out of place in America because, to put it simple, we don’t belong. We’re too dark to be seen as white and not dark enough to be accepted in black culture. We are the true American anomaly. Not only that, but in our own family and culture there is a strict Roman Catholic tradition that can also be found in England where Morrissey was born and raised.

And it’s not just the Latino population in the west coast. All across America, even in Texas, New Mexico and Chicago, where a large Latino culture is prominent, you will find a large contingent of Morrissey fans. Let me say that not all Latinos are Morrissey fans but many like me are drawn to him because he can feel our pain. Pain is an indiscriminate emotion that everyone feels and the way that Morrissey expresses his longing for happiness is universal.

I can see how some people think it’s weird that a lot of Latinos can relate to a sexually ambiguous English singer, but think about the music, it always goes back to the words and his songs. Moz and The Smiths sing about alienation, loss of love and conflict of religion and authority with a romantically poetic feel that Latinos are renowned for. We are known as the Latin Lovers. We are passionate and proud people. And the lyrics of Morrissey directly tune into our passion and estrangement. We look at danger and we laugh our heads off. Songs about famous international playboys, boxers, girlfriends in comas, wonderful women and handsome devils—believe me, we understand.

I, being a poet, clung to his lyrics and more personal songs with The Smiths’ like “This Night Has Opened My Eyes,” and much later with “Will Never marry,” `Sister I’m a Poet,” “You’ve Had Her” and “Lost.” He has the voice, the kind of voice that’s a combination of Sinatra, Elvis, Bowie and T-Rex. Morrissey seemed sweet and loyal yet lethal with lyrics like, “She used to be nobody’s nothing,” that could cut you down worse than any weapon ever could.

But it was the lack of voice or Morrissey not showing up at all that put a strain on my admiration for the man and his art. It was during the Kill Uncle tour, his first journey to American since he left The Smiths, and I had tickets to a show in Austin. I could remember the anticipation of going to see my hero in the flesh. The day arrived, driving to Austin from San Antonio my heart was beating fast, it would be just as a magical night as the moment when I first heard his voice in my brothers car ten years earlier. But, it never happened. The night before in Dallas, the crowd rushed the stage and Morrissey ran off stopping the show earlier than expected. The venue where Morrissey was supposed to play, the City Coliseum, had an old fault stage and his tour crew said it was unstable so they canceled the show. My friend said it best, “I thought I was going to be depressed but this is worse having not seeing him at all.”

I couldn’t listen to Morrissey and The Smiths the same way again. It hurt, how could he just cancel? Why not move the gig somewhere else? I am still waiting for my apology, I’ll probably never get it, maybe it would have been a hazard being in there with all of those disciples, but it would have been worth it just to hear one song. Even when he came back to San Antonio many years later, I couldn’t go. It was like being stood up by the most popular girl at school once and giving her the opportunity to do it again. Yeah right, nice try Mozzer.

But I went back as I always do, back to the old house. To the songs that saved my life, all of them, the new and the old. It’s that connection that I felt in my brother’s car during my youth, it was still there. I could never adore Morrissey the same but I still respected him as an artist. So I bought them all, every album from, Beethoven is Deaf, Southpaw Grammar, World of Morrissey, My Early Burglary Years, and even Under the Influence. I own them all — after all, we had been through the good and bad, Morrissey’s voice would still stand by me even in school.

I remember when I tried to be shocking when I wore a Charles Manson T-shirt to school and no one said anything. But a week later when I was late for class I threw on my Morrissey t-shirt and all hell broke lose. I remember people whispering, “…that guy’s wearing a Morrissey shirt…” with lifted noses and disapproving glances that would have even made The Moz smile.

But it always came back to music, that what bring me back, even many years later. Most people could remember incidents in their life by movies but I go back to points in my life with Morrissey songs. Every heart break with every girl I have known, from Laura, Alexis to Jessica and Heather playing “Will Never Marry” and “Tomorrow.” remembered to the sad strings in `Will Never Marry;” going home alone from the clubs listening to “How Soon is Now?” There was the time I finally moved to New Orleans away from my strict Latino family household to the sounds of Viva Hate‘s “Break Up the Family” and especially with “Late night, Maudlin Street.”

Morrissey has always been there like a singing angel slipping in the soundtrack to my life and I have been grateful. So that’s why on March 29th I walked into my local CD shop and added Moz’s new live album At Earls Court to my collection. I had the same anticipation when I would go purchase his tapes. The feeling was the same, even though I had heard most of these songs before. But hearing “How Soon is Now?” and “There is a Light That Never Goes Out” in a live setting made me feel like I was actually there. Because twenty some odd years later, I’m still there in the back of my hermano’s car hearing that song for the first time. That light still burns with a sound so memorable and a voice that always understands.