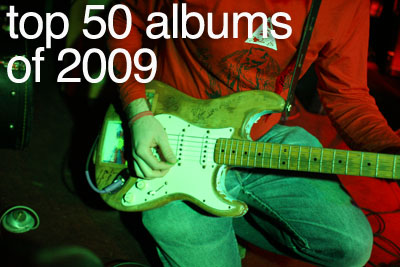 On paper, Bradford Cox is all over the map on Logos. “The Light That Failed” floats along in a glitchy haze. “Shelia” is a sugary-sweet bit of early `60s pop. Cox churns out a 9-minute motorik epic for Stereolab’s Laetitia Sadier to blanket in her lovely voice, and, with the help of Animal Collective’s Noah Lennox, captures a sunny summer day in a sample of The Dovers’ “What Am I Going to Do?” Both endeavors find their collaborators in top form. Haunting acoustic lullabies and minimalist electronics occupy the same amount of space. That familiar reverb rests alongside a dash of unfamiliar instruments. And yet everything sounds unmistakably like Bradford Cox, which is quickly becoming a compliment of the highest order. Between Atlas Sound and Deerhunter, the incredibly prolific songwriter is ensuring a place for himself as an essential segment in underground music’s continuum. – Eric Friedman

It didn’t have the street art flash of the cover of Old World Underground, nor the 80’s day-glo pastiche of the cover of Live it Out, but the music that Metric created on Fantasies remained solidly true to its hard-charging, danceable pop beginnings. But, with this album, Emily Haines, James Shaw and company didn’t just photocopy their early success. In fact, if such a thing is possible, the band went even more accessible, and gained even more indie cred out of the deal. After a hiatus in which Haines explored more sedate musical pastures, Metric came back like a band with a mission, a mission to transform indie rock back into something fun and celebratory. Haines slipped brilliantly back into her role as the tough but sweet, smart yet innocent, sultry siren, and I hung on every word. “Gimme Sympathy,” “Gold Guns Girls” and “Help I’m Alive” are all incredibly strong singles, showcasing the talent this band has for writing hit songs, but “Blindness” and “Stadium Love,” the last two tracks on the album, are unsung bits of genius, the first being an anthem in the waiting and the second a show-stopping closer that earned its title. – Terrance Terich

Despite a few noble efforts from the likes of Wale and Fashawn, 2009 will be remembered not for its youngest class of hip-hop artists but for its veterans, chief among them Mos Def. Refreshed and bringing with him an appetite that fans haven’t born witness to since Black on Both Sides, Mos Def released a stunner of an album with The Ecstatic, an abstract, colorful work of diversity and brilliance that, while seemingly incongruous at times, is a thoroughly and consistently amazing listen. Bolstering half of the album with jazz and Middle/Far Eastern beats from fraternal Los Angeles producers Oh No and Madlib, Mos Def takes the listener on the proverbial journey, almost quite literally, from the Iraqi occupation (“Auditorium”) to a foreign embassy (“Embassy”), while closing the album with some psychedelic Brazilian funk sounds (“Casa Bey”). Chalk his self-comparison to Sugar Ray Leonard and Muhammad Ali to braggadocio, but The Ecstatic is a knockout. – Jeff Terich

Natasha Khan’s songs always seem less reflections on the world than attempts to create another world altogether. Two Suns is an album of gothic lullabies and new wave hauntings, the two often merging in the space of the same song, surprising with the uniqueness of their emotional pull. At the center of it all is Khan’s voice, brittle and vulnerable one moment, authoritative and thick with wisdom the next. On the exceptional single “Daniel,” the sound ghosts of the ’80s are certainly fully in effect but given a satisfyingly contemporary coloring, violet and black, Kate Bush and The Cure hovering in the wings. Scott Walker shows up on theatrical closer, “The Big Sleep,” adding an extra layer of classy gloom, but Khan remains the star, showing once again that behind the transparency of the new-age, hippie image projected by her appearance, lies a talent all-but-impossible to pin down, conveying and mutating her inspirations in a theater of musical shadows, often entrancing, always mysterious. – Tyler Parks

It’d be a little easy to talk about Hospice in terms of the health-care clusterfuck. So I’ll do it! Hospice is a genuine emotive masterpiece, a forensic investigation of every ache and anguish caregiver and patient clash and ally over. It’s among the best pieces ever on terminal illness and dependency. If Louis and Prior’s mutual deterioration in Angels in America ever had a proper soundtrack, this is it. If The Year Of Magical Thinking needed supplemental light, the Antlers do everything but carve “JGD” into their flesh. Some of it is almost literally too sad to play but even at its most dire (“Bear,” “Two”) hope glistens sharp as a tearstain. We’re not old at all. – Anthony Strain

After nearly a decade of overbearing earnestness and pomp from all caps/ triple-exclamation-point indie rockers, it’s more than a little refreshing to come across an album so understated and delicate, it sounds private. The xx’s debut album doesn’t leave a heavy impression the first time around, but its impressions are long lasting. Using the title of early single “Basic Space” as a template for how best to map out their vision, the London quartet (now a trio) celebrates simple pleasures like watching videotapes at home in the soft and serene “VCR,” while reconfiguring a spacious, “Wicked Game” sexiness on “Infinity.” This could be an intimate night with a lover or a soothing shelter from the elements; either way, it’s a night that won’t be forgotten. – Jeff Terich

What was it about 2009 that made so many bands crank out their most impressive work to date? Was it some supernatural confluence of creative energies or just plain luck? Dirty Projectors may or may not be able to help answer that question, but their excellent debut for Domino Records, Bitte Orca, was undoubtedly one of the many monumental musical achievements of the year. Mastermind and frontman Dave Longstreth has traveled one of the more obtuse and challenging paths in indie music this decade, one that has both drawn some into a cult-like reverence and repelled others, but never before has his work rewarded listeners so fully. An album that comfortably straddles the lines between art, pop, technical prowess, and accessible songwriting, Bitte Orca takes the ideas explored on the Dirty Projectors’ 2007 record Rise Above and pushes them to their logical and more realized conclusion. Here the emphasis falls decisively on the inspired interplay between Longstreth’s intricate, Jùjú-influenced guitar work and the stunning vocal harmonies of Amber Coffman and Angel Deradoorian. From the bright, fractured pop of “Temecula Sunrise,” to the R&B-like groove of “Stillness is the Move,” to the massive, layered anthem “Useful Chamber,” Bitte Orca is a complex listen that accomplishes a whole lot in just nine songs, reconciling its numerous parts in a manner that is refreshingly comprehensive and original. – Derek Emery

For a while there Phoenix were on the verge of being truly frustrated: too pop for the indie-hippies, too askew for the Mall of America. It’s Never Been Like That may have pushed them in a more unmitigatedly starfucking direction but 2009 was the year, finally, Phoenix exploded. Wolfgang Amadeus Phoenix is their first album about which the best thing isn’t Thomas Mars’ singular phrasing; it’s their best album, period. Some of the decade’s best unabashed pop-tuneage turned out “Lisztomania” and “1901,” and “Lasso,” which I decided is better than both of those, just as I wrote this. Blame Sofia Coppola for the album title. – Anthony Strain

Much like the gorgeous mosaic illustration adorning the cover of Grizzly Bear’s Veckatimest, the album itself is a compendium of mesmerizing parts—the acoustic guitar breakdown on “Southern Point,” Victoria Legrand’s breathtaking backup vocals on “Two Weeks,” the furious strums on “Fine For Now,” the hypnotic repetitions of “Ready, Able,” the swoon of strings that opens “I Live With You.” Likewise, each of these individually fascinating and beautiful pieces locks together and fluidly morphs into a greater whole. It’s an album of mystery and subtlety, nuance and intrigue. Even the title, a reference to an uninhabited island off the coast of Massachusetts, is extremely curious. But whatever it holds back in explicit explanation, it generously makes up for with awe-inspiring melodies and gorgeously elaborate arrangements. Early on in the album, Daniel Rossen sings, “you’ll never find me now”; with so many twists, peaks, rabbit holes and caverns, it’s all too easy to find oneself lost within this album’s endless inspired hiding places. – Jeff Terich

It takes something special for an album released in January to end up at the top of year-end lists. Especially in the age of the mp3, when the tendency and desire to fall in love with new albums, new songs, seems to be magnified daily. Merriweather Post Pavilion is certainly special, and while a great deal has obviously been said and written about it, it remains impervious to the onslaught of words, to the gleeful declarations of its wonders by fans, as much as to the slanders and denouncements of those who are not, or choose not to be, taken in by its charms. The fact is that in becoming more accessible, Animal Collective become no less elusive. MPP simply feels like one more stop along the way for a band that is smart enough to know that to arrive anywhere for too long on their creative journey is to cease to experience the thrill of making the new emerge, to cease to produce for their listeners new encounters with the potential to stretch their brains and bodies in unexpected and desirable ways.

But then again, MPP is magnificent all on its own, a series of pop-shaped songs that sample and suggest the haptic textures and heady depths of the finest house and techno. And indeed “Brothersport” took shape over a later discarded Moodymann sample, while “My Girls” rises and falls along synth arpeggios that sound straight out of Frankie Knuckles’ euphoric classic, “Your Love.” While any number of groups, influenced by underground dance music have taken to toying with electronic sounds, making music as focused on feel and groove as on song structure and lyrical intent, Animal Collective’s use of these sources of inspiration is remarkable for seeming completely unforced, like their collective sensibilities and these sounds and moods always belonged together but simply took a while to end up where their inevitable rendezvous was to take place. – Tyler Parks