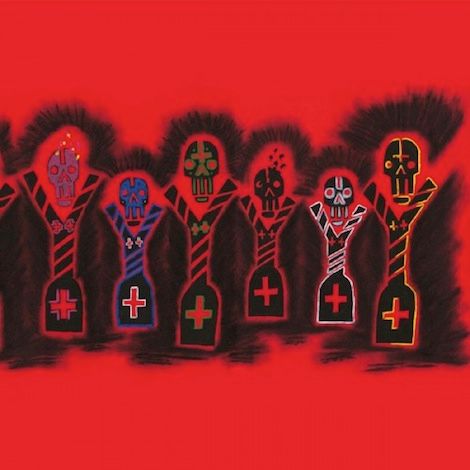 William Bennett knows a thing or two about making abrasive music. The Edinburgh-based musician and producer is best known for his work in pioneering noise and power-electronics group Whitehouse, whose revolving-door lineup ensured a steady stream of new blood to splatter throughout their always intense, always extreme, and sometimes outright violent bursts of noise and provocation. But somewhere along the line, Bennett traded aural assaults for hypnotic rhythms, and sadistic tests of listeners’ will to more nuanced sonic treatments. Yet never in that time did he ever abandon his taste for darkness or dissonance, and on his latest as Cut Hands, Festival of the Dead, it shows.

Cut Hands’ first full-length for Blackest Ever Black, Festival of the Dead continues Bennett’s exploration of African and Haitian Vodou music, turned up to the point of deafening thunderousness. This was his M.O. on albums like Black Mamba and Afro Noise I, and it served him well enough, and so it goes here, on which Bennett dives deeper into this rhythm-vs.-volume aesthetic, occasionally finding nuance or unexpected moments of subtlety in a landscape that seemingly allows for little of either. “Belladonna Theme,” for instance, is practically ambient, turning away from the gut-punching rhythmic exercises of some of the album’s louder tracks in favor of something that damn near soothes. There’s a similar ethereality to “Inlightenment,” which goes a shade more eerie, and the air-raid siren-song of “None of Your Bones Are Broken” is quite a few shades darker.

It’s tempting to say that Bennett is in his wheelhouse when everything is firing on all cylinders, and every beat hits with bruising impact. And certainly, he hits the bullseye more often than not, particularly on the opening breaks of “The Claw,” and the polyrhythmic euphoria of “Damballah 58,” which was released late last year as a single. But it’s often in the moments where the beats taper off a bit that Bennett is most successful in his approach. “Parataxic Distortion” is a case in point, which isn’t as danceable as something like “The Claw,” but more than makes up for it with its ominous industrial tones. It’s haunting and menacing, but it doesn’t pummel, which is actually kind of a nice respite from the dancefloor tussle. It’s almost too effective — the kind of song that makes you more inclined to look over your shoulder and turn on a few more lights after it’s done — but it’s a rare moment of quiet before the zombie hordes come stomping over the horizon.