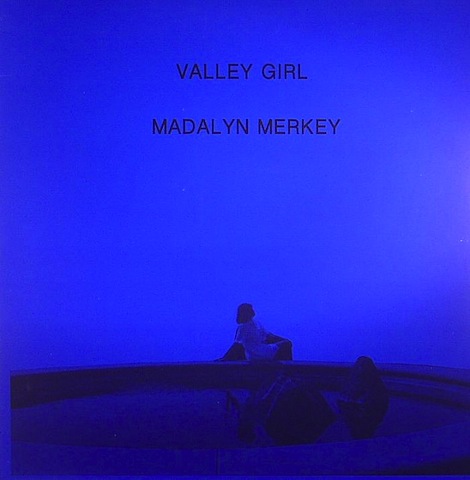 Electronically produced sounds are often most seductive when they seem exotic or extraterrestrial. The history of electronic music is riddled with titles that reference outer space, and electronic tones and soundscapes were quickly adopted by filmmakers and television producers who recognized that alien sounds had the capacity to directly evoke experiences and worlds that fracture the logic on which we hang our everyday assumptions and habits. While such sounds clearly can suggest disturbances with occult or extraterrestrial causes, they can also make us suspect that there is something amiss beneath the veneer of apparently normal settings.

With Madalyn Merkey’s latest record, Valley Girl, we encounter sounds that may seem to speak of another world, but she claims that the album was inspired by the agriculture and landscape of Oakland, Calif. There is thus a play between a real landscape that serves as her home, and sounds that make us “hear a new world.” The title of the first track, “Archipelago,” suggests a humid, tropical region when associated with the sounds that make it up. A minimalist deployment of droning sine tones is washed over by flashes of wild color, whispers of warm sand and turquoise sea. But when she processes her voice through a vocoder, during the “valleys” unfolded from time to time, the tropical imagery disappears in the heady miasma of a voice from outer space. It’s a startling combination of elements, and one that has beckoned me back for repeated return trips.

Lately, I’ve also been slightly obsessed with a track of Robert Ashley’s, “Flying Saucer Dialogue,” which was produced, like Merkey’s album, at Mills College. It plays human voices against an electronic soundscape that veers toward dystopian dimensions. I think there is something like that going on in “Archipelago,” but Merkey also manages to throw a paradise, somewhere beyond the edge of the mind, into the mix. This makes it, to me, the most alluring piece on Valley Girl. “Arpent” is also quite striking though, and it seems to contain phantom transmissions from dead satellites that provide some sort of coded information. There is something mysterious and alluring about the intelligence that has organized it. This intelligence is asserted by the singular shape that the track takes, but it remains remote from us, the premises upon which its thought proceeds incomprehensible.

“Arpent” also contains a tone that reminded me of a sound from another piece that I couldn’t put my finger on. It was like being in the presence of a ghost, or like Merkey’s composition was haunted by the shadow of a track that was all too present, but which was wholly absent so long as I couldn’t name it. Eventually, I realized that I was being haunted by Biosphere’s “Phantasm,” a pleasant little exercise in conjuring the supernatural through synthesized sound. It was strange to be jarred out of the world of Merkey’s piece and thrown onto a pursuit of the level of the past to which this tone belonged in my memory.

This movement itself though, from absorption in “Arpent” to its taking a place in a chain of associations, seemed odd all on its own. Why should something so singular become the source of reminiscence rather than carrying me along its own unique aural pathway? But maybe this movement is an analogue to that that takes us from the rolling hills on the Oakland horizon into a hermetic, exotic soundworld. We take the trip organized for us, but we may slide into our own space, somewhere between the sounds and our memories. Still though, the best thing about this record is that at times it seems to call out from a place that we have never seen or heard of, but which may prove to be a future port of call.