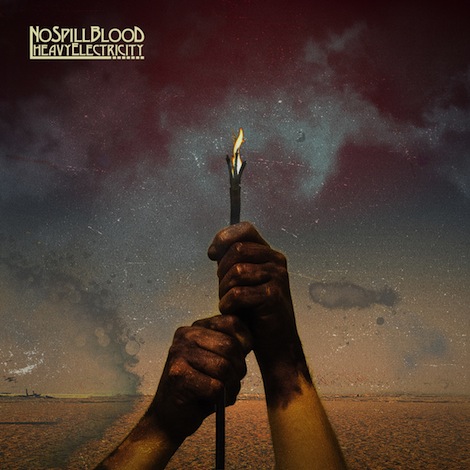 Whoever said prog and punk are meant to be kept separate clearly didn’t see the potential of what they can do when those forces combine. Dublin’s No Spill Blood understand that potential — they’re indebted to both of the extremes that arose in rock in the 1970s, albeit with a much more contemporary, not to mention heavy-as-fuck outlook. Formed in the waning years of math-rock outfit Adebisi Shank by that band’s Larry Kaye along with keyboardist Ruadhan O’Meara and bassist Matt Hedigan, No Spill Blood showcased an instrumental makeup only slightly different than AB’s, but in execution sounded dramatically different. Kaye’s no longer in the band anymore — he’s since been replaced by Ror Conaty, though Kaye did drum on the group’s debut album Heavy Electricity — but since the group launched, they’ve progressed and grown into something impressively beastly. No Spill Blood is a much burlier, more visceral kind of band; there’s instrumental dazzle on a technical level, but it’s a far less pressing concern than what No Spill Blood does best — rock the fuck out.

Though the group’s name might evoke a certain Oingo Boingo song — and that band in itself is a kind of cross-section of punk and prog in their own way — No Spill Blood owe less to that California new wave band than some of the darker outfits from across the pond around the same era (like Killing Joke, for instance), or Devo in their most upbeat, spastic moments. Yet while heavy use of synthesizer colors the group’s aesthetic, this is still a band that operates primarily in a heavy-music realm. Take “Thinner,” from new album Heavy Electricity; while O’Meara makes dreamily billowing shapes out of his Moog, it’s the band’s rhythm section that turns the song into a snarling, predatory monster.

The throb and pummel from drummer Kaye and Hedigan are the backbone of Heavy Electricity. In their proggiest moments, No Spill Blood can certainly get comfortable just hanging out in the mystical ether, but it’s not ultimately where the fireworks go off. Tracks like “Sweet Beans” are — showcasing a furious rhythmic assault while Hedigan unleashes a feral snarl and O’Meara uses this solid-steel spine as a foundation for his mesmerizing, cosmic techniques. Few tracks approach the sheer gothic menace of opening track “White Out,” however; here’s where the Killing Joke comparison really comes in handy, as the trio taps into that group’s post-punk doom while draping it in a synth melody that recalls Nine Inch Nails’ “Terrible Lie.” Sometimes the band takes the time to float back up into that mystical ether, and it’s an interesting place to visit; just remember that it’s only a matter of time before that thunder comes crashing back down.

These Arms Are Snakes – Easter