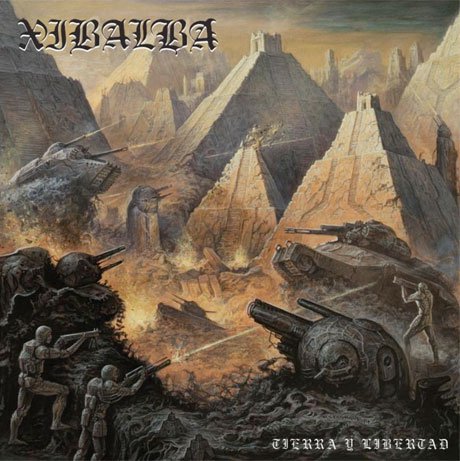 We’re long past the point of any metal-hardcore fusion sounding novel at this stage. When D.R.I. released Crossover in 1987, or when Suicidal Tendencies transitioned into thrash around the same time, metal and hardcore were still separate concerns. They at least shared some common ground when it came to vest patches and loud guitars, but their identities couldn’t be more distinct. Now, you can find plenty of metal without hardcore influence and vice versa, but it’s beginning to feel as if those are the minority — that more than ever, hardcore and metal are inextricably intertwined, and whatever differences these separate worlds have are just going to have to be sorted out in the pit.

There are still some bands making incendiary fodder of the tried-and-true metal-meets-hardcore formula, however, and Pomona crew Xibalba is one whose own take is particularly beefy and brutal. Ostensibly a beatdown hardcore band with death metal riffs in their repertoire, Xibalba opts for a heaviness of which few bands are capable on new album Tierra y Libertad. Building on the foundation of 2012’s Hasta La Muerte if primarily in sheer power, Xibalba’s sophmore effort is an endurance test only in the sense that it’s easy to feel tenderized after a spin. The group specializes in burly, furious chug assaults, and on Tierra, it’s relentless. Each guitar riff goes straight for the gut, just as all of vocalist Nate Rebolledo’s growls could singe your eyebrows. It’s less like an album and more like an audible fight club.

And, you know, sometimes that’s kind of what you need. There’s not too much to distinguish between these songs, save for a few highlights like “Si Dos Quiere,” with its doom intro, and the 12-minute “El Vacio,” which moves at a much slower and more ominous pace than the songs that precede it. And because of that, Tierra y Libertad can feel like a bit of a slog before it even gets to its strongest material. Which isn’t to say that any of the songs here are bad; far from it — Xibalba are relentless and precise in their approach, and impressively so. That doesn’t mean that these songs couldn’t use a bit more melody, or variety. Then again, maybe you just need a punch to the face, which Xibalba are more than happy to provide.

Ringworm – Hammer of the Witch