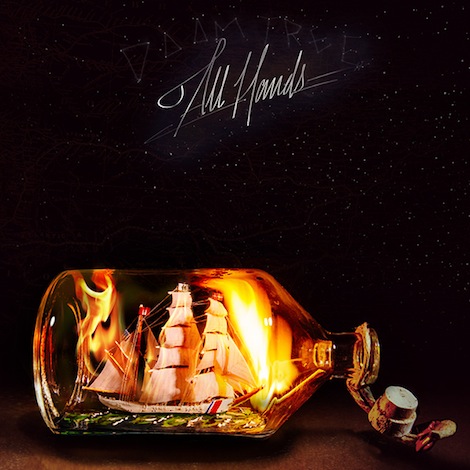 Do you ever have an album, or a musician, or an entire genre/scene that you simply don’t know how to handle? I’m reaching that point with Twin Cities hip-hop. I give respect to their beloved Rhymesayers label, but my favorites from there have either come from far beyond the MPLS (Aesop Rock, Freeway, Dilated Peoples) or left the roster (MF Doom). And I know that artists from the scene are critically acclaimed left and right, but I’ve listened to them off and on for years with little success fitting them into my radio shows or giving them positive write-ups.

I took on the challenge of All Hands, the new album from Minneapolis rap ensemble Doomtree, based not on the strength of 2011’s No Kings but on the “Wugazi” bootleg album they helmed, 13 Chambers. There still had to be something to a crew that reinforced and recast the music-as-cult nature of Wu-Tang Clan by mashing it up with The Most DIY Band Ever, Fugazi, right? And yet instead of feeling like individual works from individual skilled rappers or a unified effort from a united front, All Hands sounds like a lot of the same things done over and over so nothing stands out.

Doomtree run seven deep: three pure rappers, two producers, and two who split their time in both camps. Every song on All Hands finds at least three of the five vocalists spitting rhymes. There are no true solo spotlights, no dynamic duos of interplay, no time for anyone to really shine. And that’s a real shame, since we’re talking about people like Sims (able to reference Joakim Noah and David Lynch back-to-back in “Gray Duck”) and Dessa (who deserves a proper unleashing to battle the Nicki Minajs of the world).

There’s so much flow, in fact, that there’s a concurrent problem of no clear message being delivered in any song. The album devolves into a static of syllables where only the occasional couplet cuts through; I only really stood up and applauded Mike Mictlan’s “Polyamory, fuck everybody” out of context, deep in the, um, marathon closing track “Marathon.” All Hands is frontloaded with its three singles — “.38 Airweight,” “Gray Duck,” and “Final Boss” — which shine more due to Lazerbeak and friends’ trap and EDM soundtracks than any apparent theme.

And even this backing music is imperfect. I know it’s long past time for your MCs and rappers to multitask, yet there are too many moments on All Hands (the choral hooks of “Final Boss,” the indie-pop guitar snuck into “Heavy Rescue”) that feel plastic and hollow. It’s another indication of the conundrum faced by this crew: trying to be inclusive yet coming off as insular. Like an arcade crane or a money blowing machine, Doomtree represent an embarrassment of riches too numerous and slippery to actually grab.