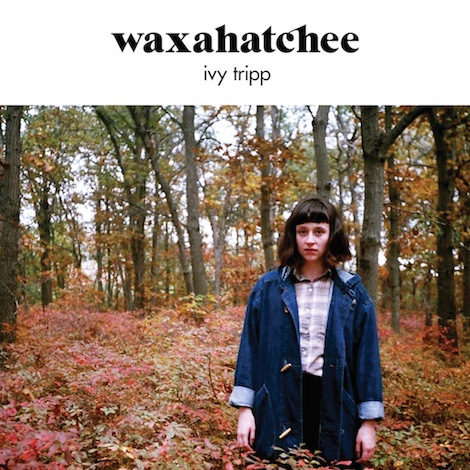 One of the greatest tools at Katie Crutchfield’s disposal is her ability to turn any song into a starkly intimate space. A lot of that comes out of the starkness of the songs themselves; on the sophomore Waxahatchee album, Cerulean Salt, the greatest moments were often those whose building blocks comprised only her voice and guitar, like the hushed “Blue Pt. II,” or the breathtaking opening song, “Hollow Bedroom.” But the gentle, restrained nature of her arrangements are also a means for putting a spotlight on the tempestuous nature of the lonely, confused figures in her repertoire, like the ill-fated wedding couple in “Dixie Cups and Jars,” or the heroin addict in “Lively” that dreams of hitting “separate bottoms” with her partner while in the hospital. It’s not always comfortable, and it’s not always such an easy reality to face that Waxahatchee presents, but even as she draws you in with a sometimes-brutal perspective, she puts a shockingly beautiful spin on these fucked up situations.

“Breathless,” the first song on Ivy Tripp — Waxahatchee’s third album and first for Merge — feels every bit as up-close and private, her melancholy words ringing out over a distorted drone of organ. It’s stark, but it feels more richly produced and powerful than the songs on her previous two albums. Where Cerulean Salt often felt like a late night after a few too many drinks, and a few more words that shouldn’t have been said, Ivy Tripp comes to life almost like the next morning. There is hope, there are possibilities, and there’s a future beyond that “sad story with an end.” And it’s the sequel that’s even more exciting.

Ivy Tripp, whose title is a term Crutchfield invented to describe a “directionless” person in early-ish adulthood, is — much like its predecessor — a window into the lives of people who don’t necessarily have their shit together. Yet there’s more confidence and earned wisdom behind her narratives, and more than a little defiance at that. The hard-rocking standout “Under a Rock” finds her shrugging, “Now you’re someone else’s mess tonight” and “Maybe I let on that I was interested in your brand of lonely.” To whomever’s on the receiving end of that: Ouch. But we’re enjoying the kiss off just as good as Crutchfield gives it, and if its 120 Minutes throwback video is any indication, it certainly looks fun. There’s not as much catharsis in the slow-moving “<” (that would be “less than”), but it definitely stings a bit when she sings, “You’re less than me, and I am nothing.” Still, the messy collapse of instruments at the end provides a satisfying salve for that burn.

Yet, for how much Crutchfield’s lyrics often feel like a particularly artful form of eavesdropping, the songs on Ivy Tripp are by and large bigger and brawnier. Waxahatchee has played their share of festivals in the past, but more than ever these songs feel like they could fill the expanse of a humid field that much better. There’s essentially some built-in road-trip footage in “Poison,” as Crutchfield sings about traveling the world, “ivy tripping with no spotlight,” against a beefy, distorted backing. She transitions into some Magnetic-Fields-style Casio new wave on the wonderful “La Loose,” offering the sad “I know that I feel more than you do,” while savoring the moment against some simple patches of synth. But no song soars quite so high as “Air,” which builds patiently and slowly as Crutchfield takes stock of a less-than-ideal partnership: “I left you out like a carton of milk.” But it’s in the chorus that the song transforms from a stark cycle of riffs into a rush of emotions that finds Crutchfield showing off her vocal abilities better than she ever has.

“Moving through time, a failing pursuit,” Crutchfield sings on the slow hum of closing dirge “Bonfire.” “Give off a spark, you light up the room.” So much of the album consumes these contrasts between taking the next big step forward and going absolutely nowhere, but here — more than in any other track — Crutchfield’s stoic delivery makes it clear that she’s an observer here, rather than a participant. Crutchfield simply assumes the role, soundtracking a revolving door cast of crashing and crushed figures. With Ivy Tripp, that soundtrack sounds less like a humble indie production, and more like a blockbuster.