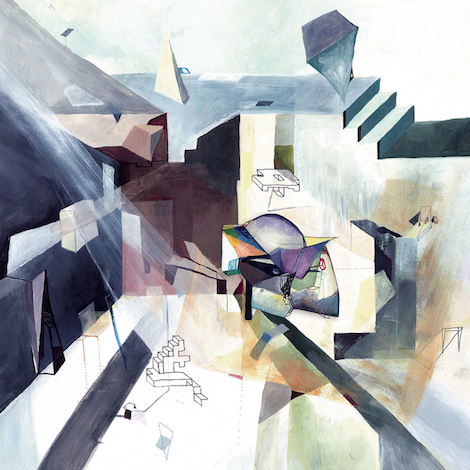 What I most enjoy about Brooklyn art rockers Ava Luna is that they seem dedicated to almost not standing out. They are clearly smart, calculated, and almost limitless in what they are willing to try. Of course, the downside to having the ability to dip your toes in nearly every genre pool is you don’t exactly get the ability to perfect anything. Coming off of the dizzying and scattershot Electric Balloon, Ava Luna finds a little bit more glue for their collage of sounds on Infinite House, though you may still find yourself overwhelmed by the fast-moving time signatures and sharp turns into R&B.

The harmonies are as off-track as they always have been, though they are more endearing this time. By the second track, the smooth churning “Tenderize,” you’re deeply pressed into a thick bassline and a locomotive grove. It’s bold that this song arrives so early, as it is not only the sharpest on this album, but perhaps the sharpest they’ve been, with frontman Carlos Hernandez channeling the ghosts of every neo soul burnout that the back half of this generation weren’t as kind to. From there, the loose and free-flowing attitude of the band takes over, with some highs and lows. In a huge miss, “Steve Polyester” — the song which follows “Tenderize” — takes us on a skittering and odd spoken-word narrative about the title character who is shaped like a cockroach (but smells good!). It is as odd and misplaced as it sounds. However, on “Coat of Shellac,” they dial down the risks and give us a breezy, comfortable ride, driven by another clean bass groove and the airy vocals of Felicia Douglass. In songs like “Black Dog,” we get the best of both of those worlds: The band at their most calm, and the band at their most ambitious. It begins with Hernandez’s soft and droning vocals over basic guitar chords, before finally breaking into a clan of choir vocals, and a circus of noise. The album is brave in this way, how every impulse the band has is fulfilled through the work, even if you get the vibe that some of the ideas should have been stopped at the door.

Through it all, the album sounds more shiny and polished than the music on it should allow. This is also a trademark of Ava Luna. No matter how much they bounce around sonically, no matter what impulses they chase, their work always sounds cleaner than it should. Perhaps this is in the mixing, or the production. But more often than not, it makes you forget that you’re listening to a brainy collective of risk-taking musicians, who are unafraid to have the risks fall flat.

There is tightness here. No matter if we’re taking in a spoken-word oddity, or the artiness of a song like “Carbon” (a true gem which closes the album), Ava Luna build from post-punk, and nearly create their own genre. Sometimes, it is possible to imagine that Ava Luna is less interested in standing out from the pack, and more interested in challenging themselves. That it is less about making a cohesive, brilliant piece of work and more about sitting around and asking each other what is no one else doing, and how can we do it? When listening to Infinite House with that approach, it is a triumph — the band’s finest, most fully realized album. The line between enjoying and appreciating is fine, and gets finer with every year, I think. I can’t promise that this album will be enjoyed. But it most certainly should be appreciated.