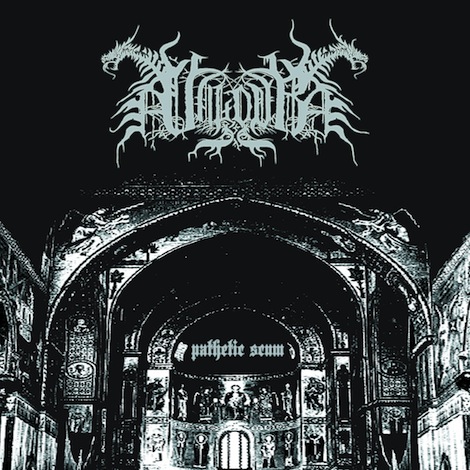 While many U.S. black metal bands continue to be hung up on their Godspeed You! Black Emperor albums, crushing Californian black metal machine Valdur come roaring out of the caverns of the underworld. The vocals guttural and almost buried by the guitar that is shoveled atop them, they are not quite an afterthought, but a physical manifestation of the primal power summoned by their overall sound. They are not shoegazing anywhere, but there’s still a haunting atmosphere in the background of new album Pathetic Scum.

Up until the about three songs in, Valdur surges at full force, but doesn’t throw the blast beats at you until “Blessings of the Goat.” In fact, they are not as reliant on blast beats as many of their peers often are. Drummer Lord Sxuperion shines as most metal drummers must, but he brings extra thunder with his double bass. When things finally slow there is nuanced chanting hiding in the cracks of the distorted wall of sound. The pitfall of many black metal bands is that they allow their intense wall of sound to just become a blur. This almost occurs on the title track, but it’s saved by the synths and the drums, which move in and out of a more militant pound. Things go weird on the instrumental “Incantre pt2,” as an odd electronic drone is bookended by a more traditional permutation of black metal. It would come across as more of an interlude than a song if it had been handled in any other way. The album closes with a step back into their influences, which go as far back as ’90s death metal and seem more straightforward than what they have woven together on the rest of the album. Still, they manage to throw a sonic curve ball in the mix and make it seem as if the brief flirtation with atmosphere found in the layers of creepy guitar is going to be swallowed by the swell of metal cascading up behind it.

Despite the fact that at certain points it gets so heavy it seems like you are listening to more of a vibration than a song, this album proves to be a step forward for the band, as they expand their sonic boundaries. From opening track “Tank Torture,” Valdur proves that you can be extremely heavy without having to sacrifice musicality. This sets the bar really high for the remainder of the album. Pathetic Scum provides the kick in the face you have been craving.

Mortals – Cursed to See the Future