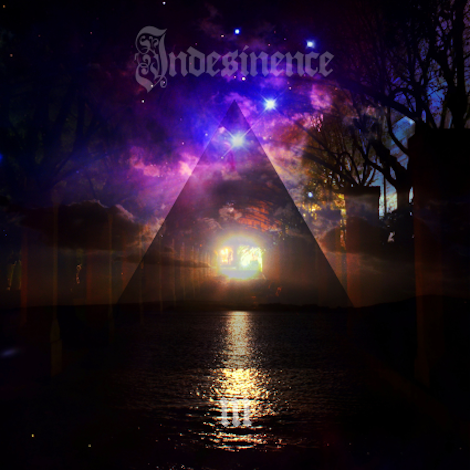 There’s no hard and fast rule that says if you play doom metal, you have to play as slow as humanly possible. It helps, of course—it’s hard to portend the ominous and bleak when moving at the pace of Kill ’em All. But a trip back through the Peaceville catalog reveals at least a handful of bands that cracked 75 BPMs once in a while (Pentagram might be the right sort of doom you’d reach for before going on a brisk jog, for instance). Still, the slower something moves, the heavier it seems—the measured pace is what allows each note to land as if it’s tearing a hole in the ground, boring its way to hell, very gradually. Why mess with something so effectively devastating?

London death-doom troupe Indesinence understand the power of a darkly menacing crawl. They don’t move in any particular hurry, instead allowing each track to unfold in such a way as to highlight every shift and transformation. And that’s a good thing—theirs is an intricately detailed and brilliantly layered form of doom metal needs that space so it can breathe, and so no minor detail is lost in the expanse of their 15-minute monoliths. But Indesinence also isn’t stuck at one speed, either. More impressive than their own take on dark and funereal doom—which in lesser hands has often turned out woefully boring—is their versatility. On III, the band’s third album in 10 years and second for Profound Lore (their recording pace isn’t all that brisk either), Indesinence showcase not only doom’s power at its peak, or how strong their songwriting is, but rather what small miracles are sometimes born from coloring outside the lines.

Those miracles aren’t hard to find, either. On the album’s second-shortest track, the six-plus minute “Desert Trail,” the band makes a string of transitions, one more fascinating than what came before, from a chilling detuned piano intro into a dissonant chug, into brief passages of blast-beat psychedelia, and eventually an occult vortex that cycles into euphoric head-fuckery. “Embryo Limbo” employs longer intervals between its moments of intrigue, but it’s one of the most beautifully terrifying things doom metal has produced in a while; the shimmering riffs that come cascading down around the 4:13 mark break through the downtuned murk with immaculate clarity. And while the 17-minute “Strange Meridian” might initially come across as a forbidding beast even to those with more patience than the non-death-doom initiated, the investment reaps its rewards several times over.

Not that every track is so miraculous; the 11-minute closing drone of dark ambient static doesn’t really add all that much to what’s already an exhausting listen. A band that’s this demanding as a default isn’t necessarily doing its listeners any favors by using up the rest of the space on the disc for a piece that just feels indulgent. But it also speaks volumes that the one area that stands out as a weak spot is the track that isn’t a 15-minute prog-metal opus. It’s remarkable how little excess there is on III, which is enough to renew one’s faith in the power of foreboding, slow-moving, impenetrable doom.