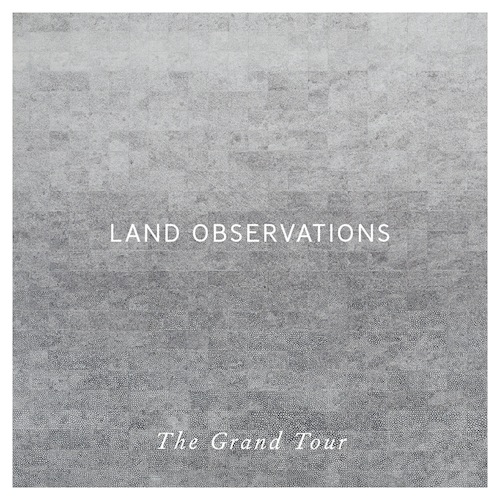 The name is meant to be taken semi-literally — Land Observations isn’t exactly the musical equivalent of a topographical survey, but James Brooks, formerly of Appliance, creates musical companions to travels and explorations. His 2012 debut Roman Roads IV-XI took inspiration from roadways and channels of communication during the Roman Empire. And its follow-up, The Grand Tour, is similarly born of ideas concerning historical travels — in this case, the actual Grand Tour, which was a traditional coming-of-age trip taken by young, wealthy European men in the 18th Century, and spanned from Dover, England to southern Italy. The tracklist hits up various points on the itinerary — “Flatlands and the Flemish Roads,” “Nice to Turin,” “Ode to Viennese Streets” — and there’s a sense when listening to Brooks’ gentle arrangements that scenery is passing by with each measure.

Were one to hear this album before being told any of that information, however, it’s unlikely that a 1700s trust-funder’s gap-year road trip would be the first thing to mind. The gentle, gorgeous sounds that Brooks creates — entirely on one electric guitar — feels more like a brisk drive through vast open spaces in middle America, or a series of snapshots taken at dusk along the Pacific Coast. The Grand Tour is an album that’s defined by its sparseness; there’s definitely a certain urgency and momentum to tracks like the krautrock-informed “On Leaving the Kingdom for the Well-Tempered Continent,” but they never fully erupt or climax, simply settling into a persistent and hypnotic groove. And the simple, almost surf-like melody of “Nice to Turin” evokes romance and melancholy more than it does adventure — and does so beautifully.

The booklet that accompanies The Grand Tour is filled with abstract rectangle pencil art pieces that accompany each track, which only further compounds just how much of the inspirational material is being stripped of literal depiction. And maybe that’s not really the point. The Grand Tour may have been a phenomenon of interest for Brooks, but the music he makes, in turn, will be processed differently by different ears. In a sense, it’s intended to take you on a tour of its own, and what that landscape looks like will vary to each person who experiences it. But it sure is pretty, however you might envision it.