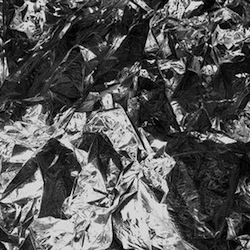 A return to the music of Barn Owl can be like an exit from the idea of the desert into shifting landscapes of fog. For some reason, when I haven’t listened to them for a while they seem to group vaguely together with that lower (or more Southern, if you prefer) West Coast neo-spiritualism intent on wide open arid desolation, beams of startling sunlight, and auburn flakes of broken earth. But really it is indeed often more of a San Francisco thing — peninsular, surrounded by water, hills capable of muted green, layers of gray losing one form as they gain another. Mystery is preferable to revelation in such a space, musical or otherwise.

All that may not be true. It isn’t true. What I’ve just written actually expresses a tension in Barn Owl’s work, as well as in the solo output of both Evan Caminiti and Jon Porras in various guises. Desert against fog…but fog wins out on their latest record, V, which seems less like a devotional pilgrimage — moving through a landscape — than a bout of wonder in witnessing a landscape moving. In this sense, it seems appropriate that “The Long Shadow” reminds me of a Daniel Lanois guitar track off Eno’s Apollo, say “Silver Morning,” crossed with one of the record’s darker moments, “Stars.” Wonder shot through with darkness…

Maybe another Lanois and Eno meeting carries us closer to the feeling running through some of V. “Dunwich Beach, 1970” is beautiful and minorly distressing drift opened to a draught of meaning by its title, Dunwich Beach being the site where the English town of Dunwich was overtaken by the sea, where its cathedrals crumbled from cliff tops and disappeared. W.G. Sebald’s The Rings of Saturn provides a particularly haunting discussion of the fate of the town, and one of Leyland Kirby’s tracks as The Caretaker from the film made about (not of) that book, Patience (After Sebald),takes as its title a line from the book: “Everything is on the Point of Decline.” It’s all quite melancholy in this context, history’s thrashing and dispossession of good men and innocents, nature reclaiming the stones that formed a town by way of the North Sea.

But what about “The Opulent Decline,” the lengthy closing track on V, which doesn’t provide clarity as to the decline under dissection? Probably that’s because the idea of decline came from the music and not the other way around. But was “Dunwich Beach, 1970” named before the music was made: a question to ask Eno if you ever get a chance. In any case, Barn Owl’s decline is both disorienting and dazzling, perhaps taking after nature in that way, a violence always at hand alongside the assurance of the desirability of this world. Perhaps the darker side of things owns this one though: I think of the opening to Aguirre, the march down the mountainside deeper into the jungle, the music of Popul Vuh. And anyone who has seen Grizzly Man may well recall Herzog’s view of nature.

So then: mystery, darkness, fog. What strange ships are sailing across the sea and toward the shores of this city marooned amidst the water? Is that the appropriate question to ask regarding V? Having formulated it, I find it somewhat fitting, but there are surely other questions, and this is a music of questions that form in sheets of modestly colored sound, rising and rupturing, bearing in with the pressure of muted fears and moments of unsuspected awe. I prefer this music of disquiet to the rampant paeans to sun gods and open space, mirages of the present moment.

Eternal Tapestry – Beyond the 4th Door