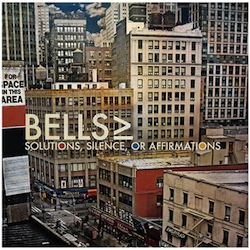 Of the many hands who had a part in creating Solutions, Silence, or Affirmations, the new album by Brooklyn instrumental rock outfit BELLS≥, a notable plurality of them have share a history as part of the fertile post-hardcore scene of the early ‘90s. The band’s rhythm section — drummer Zachary Barocas and bassist J. Robbins, who also produced the album — previously worked together as members of Washington, D.C.’s Jawbox. Bob Weston of Shellac mastered the album. Damon Locks, former vocalist of Trenchmouth and current member of The Eternals, designed the album’s artwork. And while cellist Gordon Withers doesn’t have quite the history as his bandmates Barocas or Robbins, he did an entire album of Jawbox covers on cello, and also performs and records with Robbins in Office of Future Plans.

However, Solutions, Silence, or Affirmations isn’t strictly a post-hardcore album. With its intricately threaded guitar harmonies and dramatic crescendos, it feels a lot more like a post-rock album, and for lack of a better description, that’s essentially exactly what it is. On “Metatron,” for instance, the slow build and emotional sweep of Chris Ernst and Stephen Shodin’s guitar performances evoke the melancholy majesty of Godspeed You! Black Emperor. But on the whole, BELLS≥ are a much more active group, rarely offering a composition that doesn’t have a sprightly momentum from the get-go, and almost never without at least a moderately high level of visceral intensity. The interlocking parts of “Brothers, Sisters” might not follow a verse-chorus pattern or feel much like a pop song, but in its fluid dynamic and dramatic shifts, it’s hard to reach any conclusion other than that it rocks, and hard.

It’s in that rocking where the band members’ collective post-hardcore pedigree becomes most prevalent. The snap of Barocas’ piccolo snare against Ernst and Shodin’s jet-stream guitar riffs and Robbins’ punchy basslines combine in an oddly pretty, if still ass-kicking punk rock symphony. That description more or less goes in just about every song on Solutions, Silence, or Affirmations, particularly once Withers’ cello adds its own graceful counterpoint to the more muscular elements of the band’s music. In a sense, Bells≥’s closest analog in terms of post-rock is Dirty Three, in how they both find a way to combine emotional gravity with a energetic vibrancy that never lets up, only Bells≥ does so while sounding a lot more like a rock band. No one ever said pretty music couldn’t rock.

Medications – Your Favorite People All in One Place