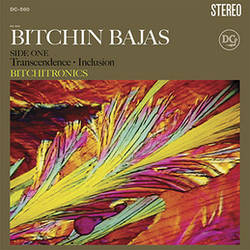 Tape looping has a curious place in experimental music history. The practice of using two reel-to-reel decks to simulate and maneuver repetition has resulted in mesmerizing, even beautiful work, from Terry Riley’s manipulation of jazz to Steve Reich’s accumulations of the human voice. But it’s strangely hard to reconcile tape looping with transcendence.

The relationship of tape loops to mantras seems obvious on paper, but even though Robert Fripp and Brian Eno used the practice to affect emotions on a certain level in the ’70s, as rewarding as their experiments were, they ultimately spoke to the listener’s internal experience. The intellectual construct of tape looping, at least for me, got in the way of having a divine occurrence. Maybe I just felt cranky.

“Transcendence” is the first song on Bitchin Bajas’ Bitchitronics, whose title pays homage to Robert Fripp’s tape loop method, dubbed Frippertronics. The side project of instrumental music virtuoso Cooper Crain of CAVE, Bitchin Bajas was a more minimalist extension of his aptitudes, building off the principles of droning, repetition and theme shaping, rather than CAVE’s looser, player-centric approach.

I say Bitchin Bajas was that, because Bitchitronics goes so much further in that direction that it almost constitutes a different project. (Crain in fact toyed with changing the name of the band.) Recorded in a house in a small town in a somewhat isolated area of Western Michigan, Bitchitronics uses tape loops in a more supportive role, rather than the front-and-center placements of Riley, Reich and Fripp. Your transcendence may vary, but there’s no doubt that Bitchin Bajas are shooting for some kind of elevation, or its earthly equivalent.

With three of its four tracks clocking in over ten minutes each, Bitchitronics spends time building its environment carefully. Crain, Daniel Quinlivan and Rob Frye rely heavily on long, extended drones that extend for two to three minutes at a time, but careful listening reveals a lot more going on in the details. Every song develops like a complete story, elements weaving in and out of the atmosphere at varying distances, laying a fluid foundation for live instrumentation.

At least one of these four tracks is a masterwork. “Inclusion” is ordered around Frye’s flute, recorded live, duplicated, edited and inserted over and besides itself at almost random spots in varying lengths. It unfolds over the slow reveal of a reverse-synth tape loop that pulses and grows over the course of the first few minutes. There are no “blue” notes – every note falls in the same major scale. Crain and company don’t even try dissonant tones until the album’s last track.

The intensity builds and spreads from left to right almost imperceptibly. Five minutes in a glassy synth pad starts uniting the sounds together, and the theme of growth and birth asserts itself. Other elements slide in and out: a harp-like run, a gentle bass loop that comes from nowhere. A little more than eight minutes in, Frye starts playing an untreated, ecstatic flute solo, and the process of birth and inclusion unveils. Not only is this a complete, stirring work in itself, it’s also proof that it is possible to do something cool with a flute.

The first three tracks of Bitchitronics follow that rough, flexible outline, with different organic instruments as fulcrums. “Transcendence” uses rhythm guitar loops and an aggressive but bright guitar solo to heighten the harmonic accidents of the keyboards. One loop in the right channel (this album is an excellent demonstration of the concept of stereo separation for your visiting aunt) bears a striking resemblance to the kind of Frippertronics you’d hear on Exposure. “Sun City,” which breezes by in just more than five short minutes, does the same with organs and synths in the front.

“Turiya” is the 16-minute-plus composition that veers away from the formula. Named after the highest state of pure Brahmic consciousness in Hindu practice, “Turiya” owes a strong debt to Indian classical and Hindu devotional music. It starts abruptly where the other three songs develop more gradually. A filter-sweeping drone, similar to the drone of the tambura in rāga, sustains throughout the entire song. “Turiya” contains the only non-Western melodies on the album, with bent notes and semitones establishing themselves in the mix. The track swirls around and reaches a gentle crescendo around 13:15. Certain passages declare themselves in the mix and rise to a point, then get re-consumed by the drone. Then, at 16:44, it stops cold.

The fun to be had with Bitchitronics hinges a little bit on your attention span, and I do not mean that in condescension. It’s just reflective of the deliberate way Bitchin Bajas build the drama: in degrees, not chapters. The sudden appearance of slight distortion in the guitar on “Transcendence,” the recognition of indistinct rhythms unexpectedly appearing in “Inclusion,” the nearly jubilant rise and fall of frequencies in “Sun City,” and the whole catalog of pulses and resolves in “Turiya” all come in subtly, so much so you’re not exactly sure where the point of entry was. You might have missed it.

I’m not sure if Bitchin Bajas meet the implied goals of transubstantiation with Bitchitronics, or even if stating those aims isn’t a red herring itself. But Crain’s crew deepens and broadens the scope of a classically simple technique, so often now duplicated by effects pedals and processors, and brings it back to humanity. Maybe locating those subharmonic moments of chance in the greater whole is the point of the trip. Overall, it’s worth taking.