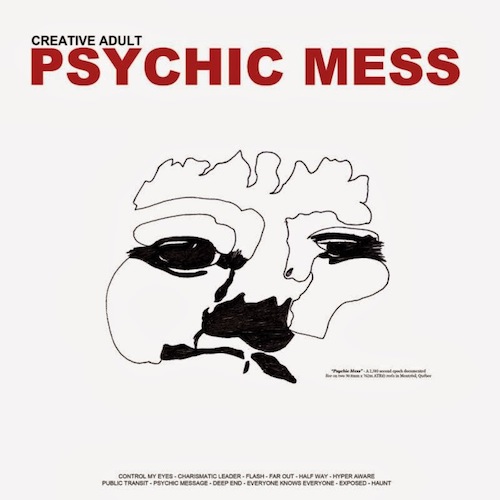 The style of music that Creative Adult plays could best be summarized succinctly and glibly as hardcore punk. That may or may not be enough for anyone reading to reach the conclusion that this is an album worth exploring, though that probably depends on your interpretation of what “hardcore punk” means. Is it straight-edge ruffians in basketball jerseys? Or is it a more nebulous and progressive sound built on a vaguely aggressive and heavy foundation? In other words, is it hardcore, or is it hardcore? For this North Bay band, the answer is somewhere in between, their melody driven throwdowns carrying vastly more in common with a band like Ceremony or Fucked Up than Sick of It All or Strife, but without as much broad experimentation. Simply put, they’ve got hooks and they rock.

Recorded and engineered by Godspeed You! Black Emperor’s Efrim Menuck, Creative Adult’s Psychic Mess is a lot more straightforward and revved up than its behind-the-scenes credits might suggest. It’s bursting at the seams with meaty power chords and ribcage-rattling drums, equally appropriate for a late-night drive or the soundtrack to a fight-club in your creepy neighbor’s basement. Certainly, it’s an intense listen, but never to the point that it sounds like it’s dangerously close to spiraling out of control.

In a song like opener “Control My Eyes,” with heavy reverb and delay effects, Creative Adult can come across like a heavier psychedelic rock band, whereas the droning atmosphere of “Flash” taps into the gothic dirges of Joy Division’s Closer. Sometimes the tempo drops, sometimes the adrenaline surges, but throughout there’s a drive and energy that makes its aggressive, albeit tuneful approach a satisfying one. Not that Psychic Mess couldn’t benefit from a bit more variety; by the end of this sequence of 12 tracks, it grows a bit more difficult to tell some of the tracks apart. Even a slight change in guitar tone would go a long way here. Not that Psychic Mess doesn’t provide a much-needed punch when you start to feel those punk rock pangs — it’s hardcore at its most raw and visceral level, which, every now and then, is exactly what you need it to be.