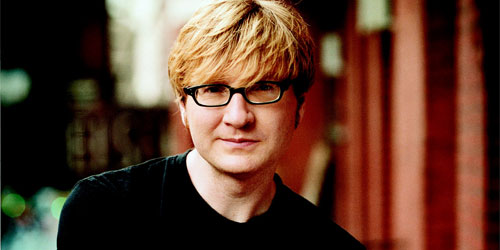 I used to be a fan of Chuck Klosterman. Notice the employment of the past tense in that last sentence. So, what happened? Well, Chuck pissed me off, that’s what. I’ve been writing these “Life on Shuffle” pieces for Treblezine for more than a year now. If you haven’t read one before, let me give you a short introduction. 2007 began chaotically, and ended much the same way for me. And so, throughout the year, rather than attempting to make playlists or choosing songs intentionally on my iPod, I chose to give myself up to fate, and that magical feature called `Shuffle.’ Oddly, and somewhat amazingly, the device managed to piece together ten-song blocks that somehow had a common theme. It was as if the iPod’s earbuds had robotic tendrils that reached into my ear canal and tapped into my brain.

So, I was shocked, saddened and incredibly angered to find in a recent issue of Esquire that Chuck Klosterman had written an article called, “Me, On Shuffle.” That rat bastard! He was stealing my gig! Well, furious as I was, I went to my beloved listening device and, yes, it picked up on my seething rage. While I listened, I imagined a huge two-ton weight, like the kind in Bugs Bunny cartoons or Monty Python) falling on Chuck from above. I thought to myself, how ironic, Chuck could be killed by that which he loves most, heavy metal. The iPod translated these dark thoughts into a song selection that I couldn’t have put together myself if I tried. And so, here is the ten-song playlist that is dedicated to Chuck, and his swift, yet painful demise.

We begin with some post-rock, as if my iPod were trying to get me to a calm place before the revenge fantasies took me to someplace truly horrific. Or maybe, just maybe, this was a glimpse into the future. Maybe the title was a reaction to the karma that would eventually come to Chuck (as JT said, “what goes around comes all the way back around” baby!) and this musical equivalent of a gloriously serene landscape was how I would feel when he got his comeuppance. Yeah, that’s gotta be it. I’ve been listening to a lot more post-rock lately, and Do Make Say Think is one of the best, yet largely undiscovered talents in the genre.

“The Last Voice” by Frankie Goes to Hollywood

It’s hard to call this track a `song,’ but “The Last Voice” certainly fits in with this Decalogue of death. Really, the track is a dark, instrumental / spoken word piece featuring British actor Patrick Allen reading bits from Protect and Survive, a series of nuclear holocaust warning adverts from the ’80s. In a quite Orwellian manner, Allen reads, “Mine is the last voice you will ever hear. Do not be alarmed.” Yikes. The clips were more famously used in the long version of FGTH’s “Two Tribes.” Of course, I’m not really going to kill Chuck Klosterman. This is all parody. In reality, the last voice Chuck will ever hear is his own, spouting off something that someone else most likely wrote.

“A Means to An End” by Joy Division

It was at this point that I realized something odd was happening. I had experienced it every time before, but this time it just seemed more eerie somehow. The word `end’ in this song, coupled with the tragic history of Joy Division and Ian Curtis, made the whole `Death to Chuck’ theme more real. At this point, I didn’t want to jinx it. It’d be like talking about a `no hitter’ in the 4th inning. You just don’t do it. But “A Means to an End” hit very close to home. Here’s a song about two people with the same ideals and vision (I suppose like me and Chuck), with the repeated phrase, “I put my trust in you.” Well, Chuck, I was a fan, and I put my trust in you, but you ripped off my idea.

“Shortly Before the End” by OK Go

The `death’ trend continued with a track by this geek chic viral video band from Chicago. I always felt that OK Go were never given enough credit for their music, tagged with labels only because of their Weezer-like first single, “Get Over It” and then by their low budget, highly choreographed videos. “Shortly Before the End” shows another side of the band, one that highlights a darker, more meditative side. “Sing us a song to hum through the hours of dying,” sings Damien Kulash, I can only guess inhabiting the body of Chuck Klosterman as he realizes in his last waking hours that it just wasn’t worth it.

Of course, if someone is going to sing a song to Chuck as he passes, he should hope that it would be Yeasayer’s “Red Cave.” It’s one of the best tracks off of their stunning debut, part folk, part gospel, and all superb. At the close of the song, the band chants, “I’m so blessed to have such a good time with my family and my friends I love in my short life, I have met so many people I deeply care for.” Wait a minute. Was I getting soft on Chuck? Maybe. Alright, I certainly don’t with anyone death. I’m not a monster. But I do think he owes us one.

“Everyday I Die a Little” by Money Mark

Death returns in this sleepy tune by Money Mark, who would be virtually unrecognizable to those used to his work with the Beastie Boys. Mark reinvents himself in this solo format as less of a b-boy and more of a “Beatlesque boy.” I know that a lot of my friends who went to peep his performance at last year’s Sasquatch festival were somewhat disappointed as it was a `Beastie’ weekend with the trio performing twice, yet Money Mark was not quite what they were hoping for. In actuality, it’s pretty good stuff, you just have to distance yourself from his past. Well, Chuck, we’re all dying a little more everyday, but your guilt should be speeding yours along at a rapid pace.

“Dream at Tempo 119” by Silversun Pickups

One wouldn’t think that this song has much to with death, but the chorus of “Don’t open your eyes, and said goodnight,” could easily be interpreted in just that manner. I haven’t listened to this album as much as I probably should have considering its buzz. But a friend of mine put it best when she said, “Is this the new Smashing Pumpkins record?” Well, yes, in a way. And I’d much rather listen to this than the actual new SP record.

Alright, so if wishing death upon someone who stole one of my ideas seems too harsh, maybe I can just wish him an ankle injury, as suggested by English duo, Fujiya & Miyagi. This opening track from Transparent Things is absolutely brilliant, and so far, I hadn’t really been let down by any of the song choices, making this edition of “Life on Shuffle” even more mind-bending. Not only could each song tie into the fatwa on a certain scruffy pop-culture critic, but they were also just plain great songs! The electro-whisper of “Ankle Injuries” recalls krautrock, the sexiness of disco and the seduction of French bands like Air. Genius. I’m now imagining Chuck with one of those big boot casts, hobbling on crutches and very, very sad.

“Take the 227th Exit” by Papercuts

This song is often tagged as the one that just doesn’t fit on Jason Quever’s sophomore album, Can’t Go Back, but this Dylan meets the Mamas and the Papas lo-fi folk rock ditty is a doozy. Again, a word in the title is what leads us back to Chuck, as he is headed for an exit, but I really don’t care which number.

Finally, we round out the revenge fantasy with a glam rock / synth gem. Chuck can have his Kiss, G’n’R and Metallica, but I’ll take T. Rex, Eno and Bowie every time. White Williams, a.k.a. Joe Williams, pays tribute to the heady days of ’70s glam with this tune, simply repeating the title over and over again, a definite warning to Chuck. Yep, you mess with the bull, my friend, you get the horns, or at least the synthesized version of what horns sound like.

And so, with that we close another chapter of Life on Shuffle (the original, accept no substitutes) and we hope that Chuck Klosterman sees the error of his ways. I suppose that I also hope he doesn’t hold grudges and realizes he can repay his probably unintentional gaffe by actually writing one of these columns for us. So, Chuck, this is an invitation. Of course, I could always just wrap this up by quoting John Reis of Rocket From the Crypt instead, “Killing ain’t wrong.”