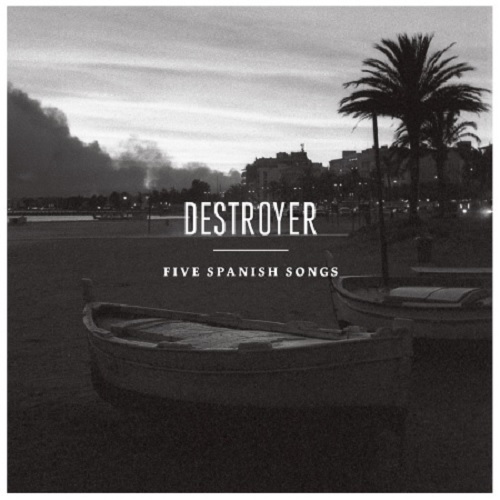 Trying to describe Destroyer’s Five Spanish Songs is complicated. On the surface, it’s exactly what you’d think it is: five songs sung in Spanish, each sparkling little ruby a cover of a song by Spanish group Sr. Chinarro and written by that band’s frontman, Antonio Luque. And like on most Destroyer releases, Bejar’s particular magic is suspended somewhere between our disbelief that this dramatically-voiced guy is making music and the peculiar sensation that he’s onto something — and it’s good. At least with English, we have the benefit of understanding the words and therefore get the dualistic nature of both what he’s saying and how he sings it.

With Five Spanish Songs, unless you’re bilingual, there’s only Bejar’s incoherent mutterings and the music. It’s pretty stripped down — his voice is an instrument rather than a function of language — only that can’t be true, because several songs burst at the seams with energy and sound. On previous albums — Your Blues and Kaputt, for example — there was always something ironic about Bejar’s vocal style and how it contrasted with that glossy quality of his compositions. That’s sort of lost in translation here, so don’t look for it.

It’s not that Five Spanish Songs is a failed attempt. In fact, every song works in some way. “Del Monton” feels like the village bard sat down on a porch to sing a sort of traditional song and the neighborhood kids popped in to do backup. The nylon-string guitar and faint percussion brings to mind a Jobim record. The lyrics sound harmless and almost forgettably quaint until the name “Franz Kafka” drops in with a jarring WTF effect — a reminder that this is Destroyer, after all, even if Bejar didn’t write these specific songs.

“El Rito” rocks and “Babieca” could easily be part of the score for an L.A. cop film, replete with funk guitar and Santana-influenced solos weaving through a layer of lush strings. By the arrival of “Bye Bye,” Bejar seems to have found his Spanish niche. The acoustic strumming against the occasional wailing notes of electric guitar complement the fragile nature of his voice, which always seems as though it’s about to break and blow away like a sand painting.

What starts out somewhat jarring, and bearing the inevitable risk of failing miserably, becomes a fascinating tour through variations on a Spanish song. It’s all here: rocker, ballad, a sort of bossa nova, and the strange country stylings of album opener “Maria de las Nieves.” But ultimately, we’re prompted to ask: why do it?

This is Destroyer, and Bejar’s never needed to explain his actions before. But if there’s interesting territory to be explored, then there’s little downside in embarking on such a diversion. Furthermore, Antonio Luque of Sr. Chinarro might just be Bejar’s doppelgänger, both in bearded appearance and lyrical complexity. The two of them seem as if they were meant to come together in some meaningful way. In Bejar’s own words: “It was 2013. The English language seemed spent, despicable, not easily singable. It felt over for English.” When you feel as if nothing’s left to say, maybe the best course of action is to learn a new language.

Crooked Fingers – Breaks In the Armor