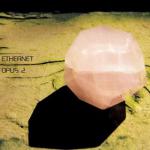 To say that ambient music is meditative can often be an understatement. It is, after all, music intended to create atmosphere above all, to engulf the listener and place him in a particular state of mind, without provoking or demanding. It’s not passive, necessarily, just accommodating. The intended effect, generally speaking, is not to give too specific a frame of reference, but to take you where you let it guide you, be it somewhere lushly nostalgic, a la Fennesz, or dark and claustrophobic, a la Tim Hecker. Tim Gray, the musician behind Ethernet, makes an even stronger connection between ambience and meditation via a kind of trance-like methodology that finds compositions growing out of periods of self-hypnosis. The music, according to a press release, was given the freedom to just “happen.”

This free-flowing, product of meditative states, Opus 2, feels every bit as loose and effortless as its methods imply, though still carrying an underpinning of darkness and mystery. Gray conceived of the album during winter months in Portland between stints providing technical support to hospital operating rooms, and there’s an eerie chill that reflects the environment under which the album came to light. For as warm and womb-like as first track “Monarch” is, it opens up into a strangely hazy and intriguing path down static fringe and the slight pitter-patter of beats. “Cubed Suns” breathes and throbs with the disquieting breath of industrial ducts and aircraft vapor, hovering in an ominous cloud surrounded by brief glimmers of sparkle and innocence. And “Dog Star,” caught in a similarly chilling space, carries a gentle throb that wouldn’t be out of place on an album by The Field.

If Opus 2 comes off as frosty or isolated, it does so merely via suggestion, neither malevolently nor mournfully. There is a sense of detachment, but also, much in the way that “Monarch” begins, a great deal of warmth emanating beneath its gentle swaths of synth and metronomic pulses. That Ethernet offers a glimpse of darkness rather than submerges deeply into it is part of the intrigue — things certainly grow dim, but one never feels too far from a light to guide the way out.