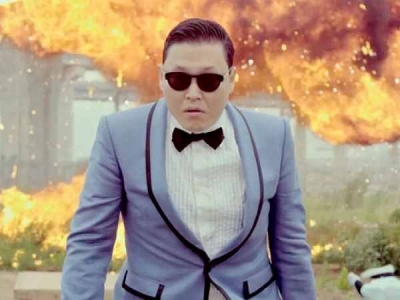 Truly memorable pop music comes to the listening masses like a thief in the night; or more accurately like a thief in broad daylight, or at least in front of everyone at any given Chuck-E-Cheese. Encounters like these prove frightening and embarrassing at first, but also so exhilarating to the point that one hopes it happens again very soon. Luckily it does. Constantly. It was the case with everything from “Don’t Stop `Til You Get Enough” to “Smells like Teen Spirit” to “Blame It on the Rain” to the revelation that “Blame It on the Rain” was a total sham. And so, too, it was the case with PSY’s now inescapable “Gangnam Style,” which not only “mugged” America, but also his home country South Korea, especially its music industry which had been slaving away to get anybody but PSY do break into the apparently still-coveted American market.

There are surely far worse ways to break onto the world stage than with a song like “Gangnam Style,” which has transfixed the American listening masses for far longer than I thought it would. But more interesting than how fast it would take for Americans to tire of it (we’re like jackals in a way, thoroughly cleaning the nearest carcass and moving on to the next one) is how South Korea’s pop culture will deal with it. On the one hand it’s given their country an unprecedented presence in America that, possibly for the first time, gets well beyond what is taught in American history classes. On the other hand, however, PSY’s music and its success seems to have undermined, in almost every respect, the strategies by which “K-pop” was supposed to take over the West.

PSY, portly, scandal-prone and whose early albums were age-restricted, was never considered a major part of the South Korean music plan, assuming he was considered a part at all. Rather it lay in a slew of artists specially assembled and groomed by South Korea’s major management companies. Groups with names like Super Junior, 4Minute, Big Bang, T-ara, 2NE1, f(x) and the banner group Girl’s Generation. Their songs are ruthlessly catchy but generic in content (love for euphemism and other soft, often self-imposed censorship is a must), their choreography is regimented to the point that it seems to be worked on more than the music, and their fashions are in a style better suited for the children of millennials. They are well-packaged products, in other words, reminiscent of our own Lou Pearlman-era of boy bands and pop tarts, only much more pervasive in their home country, to the point that it seems it’s the only kind of music over there worth listening to. But with that dynamic having waned in the States — at least outside of shows like X-Factor — can it still cross over as something more than an imported curiosity?

They’ve attracted attention from journalists even before the whole PSY business, but that hasn’t yet translated into impressive sales. In 2009 Wonder Girls became the first Korean group to chart on the Billboard Hot 100, at 76, with their English-language single “Nobody,” and have maintained a modest following with an audience that skews young. Hope for a more mature breakthrough was pinned, at least in the winter of 2011-2012 on Girls’ Generation, a nine-piece of 20-something women who performed their own English-language single “The Boys” first on The Late Show, before a rather bemused Bill Murray and on Regis and Kelly the following morning before a more elated Howie Mandel. The single cracked well into the iTunes 200 with 21,000 downloads, but was denied a place on the more iconic Billboard 200 (though a subsequent Korean-language single, “Twinkle” did chart at 126 later in the spring).

There can be many reasons why any one single fails to make an impact, though not being very good is one of them, which certainly is the case for “The Boys.” Leaving aside the robotic awkwardness of having to work into English, a song paced for Korean (for the first time no less), it simply didn’t offer much that couldn’t already be gotten in the United States a decade earlier. Indeed, most of their output, and those of other groups, seem molded on the prim and positive Clinton-era pop rather than the more nihilistic, hedonistic post-everything pop of today (Carly Rae Jepsen notwithstanding). Girl’s Generation still plans to release their all-English debut next year on Interscope, so any final judgment is very much premature, but their overall dedication to formula presents them less as artists and more as a symptom of a national condition.

Though not nearly as awful as its communist counterparts, South Korea had long been a deeply conservative nation with a propensity for authoritarian rule. Under Park Chung-hee, for instance, there was a deep hostility towards Western culture, and any hint of it was policed, from long hair to rock and folk music. Today, however, South Korea enjoys a relatively unharmed constitutional society, and can savor the fruits of its prosperity with less hindrance. K-pop has been embraced rather than shunned by South Korea’s government as a way of showing this. Better than touting its surplus of radical filmmakers I guess. Though K-pop’s balancing of substantial restraint and stylistic excess is indicative, to me anyway, of growing pains.

In the end there is a difference between Korean pop music and pop music that just happens to be Korean. There seems yet to be an equivalent to, say, what Die Antwoord is to South Africa, what MIA is to Sri Lanka, or what Shonen Knife is to Japan. There are hints of it in PSY, but also in the much less well-known — and much better — Neon Bunny. But we can’t really pick them out until they leap onto us from some dark corner at our most complacent. Superhuman energy and unfathomable cheeriness are admirable traits (well, superhuman energy is at least) but not the total ingredients for a cultural phenomenon, let alone a renaissance, but if that makes people happy then so be it. Though I’d prefer some surprises every now and then.