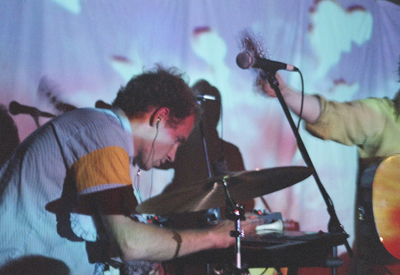 The world of Caribou is one of unpredictability. It is a world where hip-hop drum machine exercises can coexist in harmony with lo-fi acoustic recordings; where Neu!-inspired kraut-grooves can hold hands with dense psychedelic freakouts. And everything is named for a critter, mythical or otherwise. Here there’s a Yeti. Over there is a Barnowl. And just around the corner is the domain of Lord Leopard.

But the man behind Caribou is Dan Snaith, a humble, unassuming Canadian with messy hair and glasses. He has no antlers, as far as I could tell, and doesn’t look the part of mad scientist, though if he had been wearing a lab coat, he might be able to pass as one. Nonetheless, he’s a regular joe who just happens to create some of today’s best electronic music, as heard on his latest record, The Milk of Human Kindness.

As I spoke to Snaith underneath low-flying jets on San Diego’s Laurel St., I suggested that his new record sounded a little more hip-hop influenced than before. But having produced the album without a specific sound in mind, Snaith didn’t completely agree.

“It’s funny,” Snaith said. “People tell me opposite things in different interviews. One person will say to me `this is more of a singer-songwriter driven album.’ And the next person will say, `this is more hip-hop.’ It is a varied album, which I’m happier with, because it kind of reflects that I was doing lots of different stuff and it still sits together. And I like the fact that it’s all over the place.

“This time it was kind of about each instrument in the mix and trying to figure out how to arrange the songs really well. Whereas Up in Flames was really psychedelic and I just threw everything in there and left it however it ended up. In order to do something different, there was no way to be more sloppy and psychedelic. But it made sense to take some of those ideas from Up in Flames and be more careful
about where everything goes.”

Live, Snaith takes on songs from his three studio albums as a trio, a guitar player and a drummer rounding out the touring incarnation of Caribou. Snaith, himself, however, does everything from cueing samples to drumming to playing keyboards. The end result is surprisingly dynamic, more like watching a rock show than a DJ set. Cartoons scroll by, behind the trio as they pound out an intense set, giving an added visual treat for onlookers. Live electronic music, apparently, has come a long way from the days of two guys with samplers.

“It’s worked really well,” Snaith said of his live performances. “I’ve been kind of surprised, because we just take the tracks and take the individual parts and what are the most interesting parts we could be playing and what could still be samples. It’s worked well backwards, like taking a record and turning it into a live show. I guess when I’m making the tracks, I’m thinking about where it’s building tension, and
thinking about it in terms of how it would be played. I’m thinking about how tracks build. I’m just conscious of other music I’ve heard that has that live feeling of tension and release. The thing I like about the way I make music is that it doesn’t have to — I mean, it does sometimes sound like a band is playing it — but it doesn’t have to. I think that’s good. I don’t ever want to be like `oh, this track doesn’t have a bass part’ or `that’s too fast for an instrument to play.’ There’s no reason to look at it like that.”

One thing that you won’t see a lot of at a Caribou show is live singing. Though Caribou songs tend to feature more vocals than typical electronic and sample-based music, they’re not absolutely essential, according to Snaith.

“The lyrics are just garbage usually,” Snaith confesses. “As long as they’re not embarrassingly bad, and they kind of have the sound of the words and they fit the sound of the music. I listen to music and I never ever know a single word of the lyrics. I never pay attention to that. I know the way the words sound, but I guess I’m far more thinking to myself in terms of being a producer and the sounds making up the record than in terms of vocal-led music. But the lyrics are almost irrelevant.”

This is interesting to hear from Mr. Snaith’s mouth, as his own use of vocals is every bit as interesting as his combination of instruments and samples. On “Barnowl,” the closer to The Milk of Human Kindness, the vocals are spare, with Snaith breaking words down to their syllables, abandoning his vocal approach altogether, however, for the majority of the song.

Meanwhile, the acoustic “Hello Hammerheads” is a surprisingly straightforward, yet hypnotic ballad from Caribou. The phat beats, kaleidoscopic samples and dance grooves are almost nowhere to be found. And vocals, though still subtle, take center stage. Snaith, himself, was quite surprised at how the track turned out.

“It’s weird that I made that song, actually,” Snaith said. “I sat down and recorded it in forty-five minutes. I wrote it and recorded it, start to finish. And then I was just like `what the fuck?’ And there’s so much of that new folk-sounding stuff around and I just felt like ` I don’t want to do that kind of shit.’ But I did that and it sounded so much different than everything I’ve done – there’s so much space, where usually there’s no space. And the melody’s really good. But it’s kind of a fluke that it’s on there. I’m super happy with it. It’s so different from what I normally do, but it fits on the album in kind of a weird way.”

There’s no telling what Caribou will be up to in the future, but chances are it’s going to be pushing the limits. Whether he teeters closer to conventional song structures or to beat-friendly electronic dance music, Snaith will find a way to warp whatever music we’ve grown used to into his own twisted creation.

“I’ll only be working on music that’s interesting to me,” Snaith said. “And if I feel it’s too much the same territory as the last record, then I’ll just get kind of bored with it. And I kind of feel I’ve done those ideas already. So I’ll probably just keep changing, because of that.”