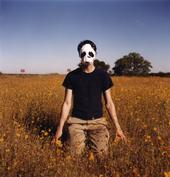 Sometimes you end up in the right place at the right time. It can be difficult to know exactly when those times are; often enough the only indication is a persistent yet vague intuition, an intimation of a general variant of well-being. However, there are times when something tangible occurs which lends sufficient evidence to validate our hopeful suspicions. So it seemed when I discovered that Panda Bear was to play a show in Lisbon, a city whose streets I have been wandering for months, not uncommonly, accompanied by Person Pitch, his much lauded, latest release. The album was recorded in Lisbon and the more I listened to it the more I could recognize aspects of the city amidst the densely ethereal songs. The singular quality of the city’s light, the undiminished charm of its century-worn surfaces, the poignancy of its intermittent silence—I can make all of these out when I hear Person Pitch. And moving through the city, headphones on, the album playing, has proved a particular pleasure.

The venue where the show took place is an African disco called B.Leza, a place I never had cause to attend in the past. It seemed a strange choice of setting, unlike most of the other events that take place there. I wondered what the audience would be like and what they would expect, not that I really knew what to expect myself. How would Noah Lennox manage to present the material in a way that would enhance or, at least, match the recordings? In the days leading up to the concert I met a few people who had traveled to Lisbon specifically to catch it, and went along for the ride as they attempted to penetrate the inscrutable reservation system through which one gained access to the show. In the end, names were written down on a messy list and assurance was given that that was sufficient.

Doors opened at 10:30 p.m. and upon arrival I found myself in the courtyard through which the club is entered surrounded by people with reservations and no actual tickets. Everyone was milling around in haphazard configurations, which resembled anything but organized lines. Things moved slowly, but with some jockeying for position and keenly adept maneuvering we eventually made it inside, where we sat around nursing complementary beers and eyeing the minimal equipment on stage—a microphone affixed to a stand with mysterious electronic gadgetry mounted to it. When Noah Lennox stepped out on stage he did so looking as unassuming as humanly possible, fiddled with some knobs and started into his set.

By the end of the first three or four songs, the format for the show was apparent. Panda started with the intro to “Take Pills” but before it shifted into its second half, he switched to a new song, as yet untitled, a version of which spread across the internet after he recorded it for Má Fama, a Portuguese radio show broadcast on Radio Zero. The song floats along like the gentler material on Person Pitch, a melancholic rhapsody intoned in exultant Brian Wilson-esque melodies. It concluded with Lennox mixing back into the “Take Pills” intro again. This time he played the song all the way through, the slow psychedelics giving way to jubilant rhythm, the crowd swaying now, however slightly, immersed in a voluminous, euphoric wave of sound.

Many of the songs on Person Pitch are composed of obviously distinct parts and this was emphasized in Panda Bear’s live set. It was something like a DJ set, though one riddled with mind-bending effects and centered upon Noah Lennox’s impassioned vocals. His hands were occupied the entire time, whether shifting from one track to another, making minute adjustments to the sound, or creating surreal vocal loops taken to dramatic extremes of cacophony. The set, like the album, was exuberantly childlike and unnervingly discordant. He created an arena in which he could reproduce the material, from Person Pitch or otherwise, in a constantly evolving, engaging way. The songs are the same basically—the same recordings even—but elements of separate tracks are mixed together and specific passages of songs are given different readings, which encourage a certain reaction, be it interpretive or wholly sensory. For instance, the subtle layers of the material may be buried in a pummeling rhythm or a certain vocal line may stray from its normal path and mutate into something totally different. The set was at once obviously well rehearsed and open to intuitive divergences.

After “Take Pills” came “Good Girls,” the first section of a song clearly separated into three sections. By the end of the show he had played all the parts, none of them contiguous with the others, each integrated carefully and with ingenuity into the adjacent tracks. There was never a break in the set, each song was mixed in this same, nearly seamless manner and the only times Noah Lennox spoke were before and after the encore. In the first instance, he simply asked someone at the back of the room if he had more time and then announced that he could play two more songs. Those ended up being “Bonfire of the Vanities”—a dub track overlaid with a simple piano figure and explosions of reverberation-treated vocals—and the final song, the second half of “Bro’s.” He’d already given it an epic reading earlier in the set; the crowd obviously responded to it and he took it to what seemed like a perfectly respectable climax. The second time around focused on the later part of the song which becomes increasingly, lividly fantastical and in a live setting it was even more so, bringing the set to a suitable, hysterically joyful close.

It was satisfying to hear the songs in a communal environment for the first time, to experience them in a more expansive, less solitary way. And at the same time, Panda Bear managed to get you lost in your own head, your own body, and to convey that wonderment and inexplicable joy so native to Person Pitch.