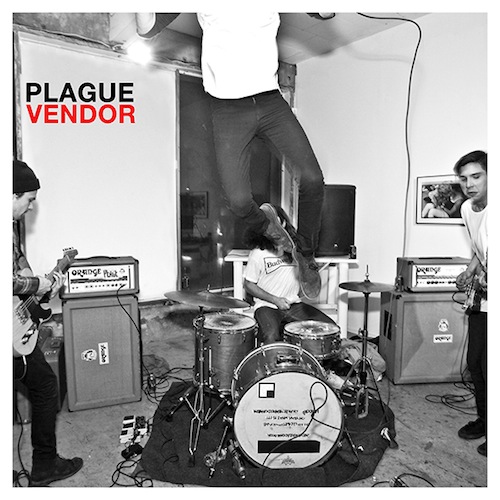 Brevity is the soul of punk. It’s far less complicated — and generally more exciting — to incite musical chaos in 90-second increments than it is to pull off a feat of punk rock endurance. Anarchy and rebellion is best exercised in sprints, rather than marathons. There are plenty of arguments to the contrary, from The Clash’s London Calling to Fucked Up’s David Comes to Life, but duration can have a debilitating effect on punk’s ability to invigorate. Three chords don’t work in 10-minute repetitions. Gang vocals go hoarse when they go all night.

What’s perhaps an even greater challenge than making punk work in longer expanses of time is finding a way to make the meatiest recording possible in less than 20 minutes. Los Angeles quartet Plague Vendor offer an impressively detailed blueprint on how to make every moment count on Free to Eat, their 17-minute Epitaph Records debut. Indeed, the album buzzes by in less time than it takes to regret merging onto I-405. It’s fast and it’s loud, but that’s just the baseline minimum that Plague Vendor cover here, expanding well beyond tried and true punk tropes in favor of a more manically melodic approach.

From the moment that the ominous bassline of “Black Sap Scriptures” begins to throb, the band’s oft-touted Liars influence grows instantly palpable. There’s more than a touch of that group’s dark psychedelia in Plague Vendor’s raucous garage-punk sound. But that sound comes in a variety of permutations, from the glam-rock sleaze of “Cursed Love, Hexed Lust” to the goth-rock shivers of scorching single “Breakdance on Broken Glass.” At no point is the band ever really in resting mode; true to the album cover’s action shot, vocalist Brandon Blaine is perpetually caught between sassy trash-talk mode and outright face-gnashing mayhem. The closest they ever come to a break is the mid-tempo strut of “Plague Vendor,” a nigh-theme song in which Blaine spells out the band’s name in his signature screech.

But Plague Vendor isn’t really the kind of band that you’d ever want to slow down. Give them 20 minutes and they’ll give you everything they’ve got, be it a reverb-laden mix of tubular surf-rock riffs and Tom Araya-style screams on “My Tongue Is So Treacherous” or narratives about driving off bridges in “Finical Fatalist.” It’s white-knuckle all the way, but Free to Eat is 17 minutes splendidly spent.