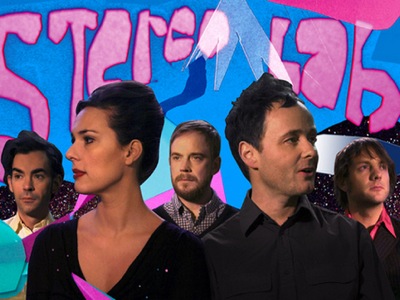 “This song is about freedom fries,” cooed vocalist Latetia Sadier before dancing her way into a particularly upbeat number. Politics, however subtly applied—whether in wanton Marxist lyrical themes or delivered with a coy smile—have always factored into a favorable quotient of Stereolab’s drive. So it was not uncouth or at all unwelcome to hear the French-born singer tease the audience at Seattle’s Showbox on the eve of the most important election of a generation.

Sadier summed the mood early, clearly excited for the evening’s performance. “This is the Percolator,” she explained before the band launched into the persistent tumbler of a track from the band’s acclaimed Emperor Tomato Ketchup. Keeping with her theme of mildly subversive political commentary, the band sampled several other suggestive songs from the same release. But the band’s latest, Chemical Chords, received by far the most stage time.

“Neon Beanbag” scuttled with the perky French-pop strains the band has championed often throughout their nearly 20-year career. Stereolab gelled with the sort of cohesion you’d only expect from such a seasoned bunch of musicians. The audience surely picked up on the song’s optimistic refrain of “there’s nothing to be sad about.” Only Sadier moved more than the ecstatic crowd, her joyous flirtations and unrestrained dance driving fans to shake it even harder in a sort of positive feedback loop.

A diverse crowd of mostly older Stereolab faithful represented the bulk of attendees, though a fair amount of fresh new converts could be seen. Bassist Tim Gane sustained meaty rhythms alongside Joe Dilworth’s diligent drumming. Particular standouts—in a night full of them—included the too-short but oh-so sweet “Valley Hi” from Chemical Chords, and a couple of unnamed tracks on which the band stretched out considerably as they haven’t in earnest since some of their earlier releases.

Their three song encore, which closed in a momentous, 10-minute jam session, was, simply put, unrivaled. I can’t remember the last time I’ve left a show feeling so enraptured as when I finally saw Stereolab for the first time. See them before you can’t. Sadier and co. will keep you smiling far longer than the ringing in your ears, guaranteed.