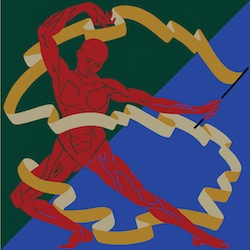 Survival, helmed by Liturgy songwriter and frontman Hunter Hunt-Hendrix, is a very different kind of band for the Brooklyn metal songwriter. For starters, it’s not black metal — it’s not even really “metal” at all, though that’s a topic for subsequent debate. Beyond a common songwriter, however, there are some important, common strains of DNA that run between Survival and Liturgy. “Tragedy of the Mind,” the leadoff track on Survival’s debut album, is cut from a similar cloth as “Generation,” from 2011’s Aesthethica. Both songs are driven by a relentless charge of complex fretwork, rhythmic jerks and a heaviness born of repetition rather than outright hugeness. Yet the former, in spite of its initial math-metal charge, opens up and blooms into a hypnotic, almost meditative psych-rock song. The path for Survival may be familiar, but the destination is entirely new territory.

A sizable chunk of Survival’s debut is built from a similar framework — intricate guitar riffs cascade and climb with rhythmically deft maneuvering, overlain with harmonized vocals not unlike monastic chants. The focus of the album is, unquestionably, Hunt-Hendrix’s guitar riffs, but more impressive than how flashy his performances are is how the band works together as a dynamic. The movements of the whole have a kind of awe-inspiring synergy that trumps the individual, and despite the combined virtuoso musicality on display, there are few showcases for one lone soloist across the album’s nine tracks.

The first half of the album essentially comprises ascendant, powerful tracks that reveal Survival as a well-oiled, technically adept machine, with more than a few melodic surprises to spare. “Second Freedom” is more Drive Like Jehu than Don Caballero, chugging along with transcendent synchronicity between Hunt-Hendrix and Jeff Bobula’s intricate, albeit abrasive riffs. And the ominous “Freedom 1” features acoustic instrumentation juxtaposed with more surging electric licks. Yet in the album’s second half, the group briefly brings the volume and intensity level down in “Since Sun Revised,” an acoustic song that finds Bobula and Hunt-Hendrix chanting, “We sing for everyone/ We lift our cups to the sun.”

There’s another important similarity between Survival and Liturgy, however, in that both bands employ intense, visceral musical textures and techniques in the pursuit of a more inspirational and transcendental experience. In the middle of the storm that the band kicks up on the album, one might briefly get the sense that Survival is merely riffing for the sake of riffing, but the band is greater than the sum of their technical skills. Survival is more about blood than sweat, and more about a higher state of being than of the motions gone through to get there. Survival is indeed a mighty storm, but when the band hits a certain momentum, and entangle the sounds of their instruments just so, the product is an invigorating harmonic clarity.