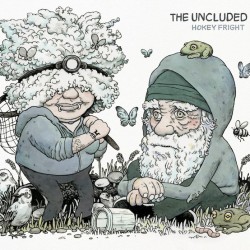 When artists from completely different backgrounds collaborate to create a joint album, the results can be fairly unpredictable. At best, the combination of styles can help create an entirely new sound, widely emulated and praised for its originality (think Run-DMC’s collaboration with Aerosmith on the revamped “Walk This Way”). At their worst, artist collaborations can produce an absolute artistic and critical trainwreck (think Metallica and Lou Reed’s Lulu). Somewhere in between these two examples is the new record from Kimya Dawson and Aesop Rock, who go by the name The Uncluded. Although there are some shining moments throughout their debut, Hokey Fright, the album lacks direction and the identity that makes each artist so strong on their own.

Hokey Fright is very probably unlike any other album you’ve ever heard. The album’s lead single, “Delicate Cycle,” combines Dawson’s musical sensibilities with Aesop’s tongue twisting abilities. It’s not a bad sound; it’s just… different. Once the initial shock wears off, the combination of such disparate voices begins to sound kind of cool, albeit, still unfamiliar. Then, “TV on 10” drastically changes the direction and pace of the record. With a sneaking bass line, eerie guitars and rolling percussion, the music takes on a semblance of Aesop’s more familiar sonic territory, and for the first time on the album, his powerful voice sounds at home. After hearing this sharp change in musical direction, it’s difficult to continue listening to the album with the idea of it being collaborative effort. There is very little middle ground on Hokey Fright. Neither artist steps too far outside their respective comfort zone, and for the most part, whichever direction the music goes, the song goes.

Tracks like “Organs” “Kryptonite” and “Scissorhands” represent Dawson’s childlike folk pop so exquisitely well, that Aesop Rock’s verses sound forced and out of place. Likewise, “Tits Up,” “Bats” and “WYHUOM” would sound more at home on an album surrounded by other MCs. There are even tracks on Hokey Fright that see both artists lose their way. “Superheroes” features a pounding beat and both vocalists shouting out the names of different sandwiches. Thankfully, it only lasts for under a minute, but even then, the listener is left wondering what he just heard and what purpose it could possibly serve. That’s not to say that all is lost with the Uncluded. Lyrically, the record is amazing. Touching on life, loss and the pending threat of mortality, Aesop and Dawson provide stark and honest viewpoints, making the musical disparity less noticeable throughout. The contemplative “Boomerang” is a rare moment where the backing music complements both artists’ unique styles, and for the first time, it starts to sound like the album they might have wanted to make all along.

Considering most collaborative albums either break the mold or fall flat on their face, The Uncluded’s debut record is an anomaly. It’s not great, but it’s not terrible. It just kind of is. Thanks in part to the strong musical identities of both artists involved, The Uncluded comes across like a schizophrenic family member — switching viewpoints and personalities with alarming frequency. You may not want to hear their bullshit all the time, but it’s family, so you’ll listen to them anyways.