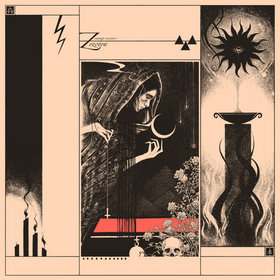 For all of sludge metal’s myriad qualities, brevity has never been one of them. In its greatest moments, it’s frequently a genre that works best with slow movements and gradually unfolding passages of ascendant triumph. Standard bearers Neurosis rarely, if ever, issue an album that doesn’t cross the 60-minute mark, and their closest musical kin, the now-defunct Isis, often reached similar extremes. But that’s not to say it can’t be done. Mastodon, for one, do three-minute sludge better than just about anyone else, which no doubt speaks to their more widespread commercial success. But Zozobra, the New Mexico-based trio founded by Caleb Scofield (Cave In, Old Man Gloom), surely breaks some kind of record with their new six-track set, Savage Masters, which pounds and pummels the snot out of the listener in a swift 14 minutes and 59 seconds.

To clarify, Savage Masters is an album and not an EP — nobody’s saying otherwise anyhow — which on its face makes the set seem a little undercooked. After all, even Oxnard’s powerviolence torch-bearers Nails is able to cram 10 songs into 18 minutes. Yet Zozobra delivers these six tracks without any fat, filler or bullshit. It’s a lean album by design, forgoing any instrumentals or intros, ballads or ambient interludes in favor of 15 minutes of intense, in-the-red metal and post-hardcore that rips mightily and rocks heartily. Right off the bat the band tears into some blistering d-beat crust on “The Cruelest Cut,” hit a furiously sludgy groove on “Venom Hell,” boost their vile crunch with some honest-to-goodness hooks on “Deathless,” and unleash some high-pitched psychedelic effects in the awesome “Chorus of War.”

By the time Zozobra let their slow-moving chug reach its supremely heavy conclusion in “Born In a Blaze,” the record comes to an abrupt, screeching, bone-jostling halt. All it takes is a short breather and a brief assessment of the damage before diving back into it though. For all of the abrasion and power they harness on Savage Masters, Zozobra make a second round seem all the more appealing.