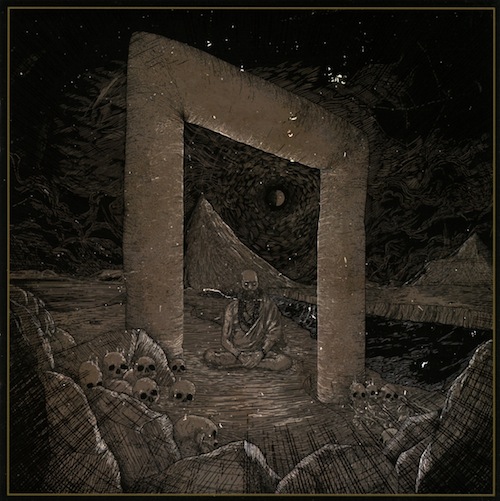 In recent years, an old-school death metal sound has been going through a renaissance of sorts. Bands like Obliteration, Dead Congregation and Portal have all done well in taking a classic, celebrated sound and bringing it back into prominence. For the past 6 years, Auroch have also been on their own quest to successfully resurrect the pummeling riffs and crushing atmospheres their forefathers pioneered, reaching a new peak with latest effort Taman Shud.

Taman Shud opens up with thunderous applause and rarely lets up during its modest, yet satisfying 25-minute runtime. The consuming angular and dissonant riffs that make up the album are here in abundance and never wear their welcome. “Octavo (Swirling in Capricorn)” is a prime example where the bludgeoning drums of Auroch meet the onslaught of Morbid-Angel-inspired riffage in a way that is at once extreme yet well-tempered. The titular track and closer “The Balkan Affair” are two brief, haunting acoustic interludes that prove to be the only thing close to breathing room that Taman Shud has to offer. Whereas the first acts as a quick rest after the assault of the first three works of catastrophic bliss, the finale works as way to reflect over the chaos that has just ensued. Both are much needed atmospheric breaks that work well to sequence the album as a whole.

Sequence also happens to be one of the stronger points of Taman Shud. Every song flows into and out of each other with ease, ultimately leaving no filler or empty space. Much like the wall of sound that Auroch creates with its instrumental bearings, every song is glued together in a way where they all feel like part of one cohesive unit. “Defixio” shows off Auroch’s ability to take a riff and surround it with rhythmic counterparts to create songs that play off of each other, rather than one part of the band following another’s lead.

Auroch haven’t exactly redefined death metal or created anything mind bogglingly epic here, but Taman Shud is a solid example of a band with a lot of potential that is finally getting comfortable with their sound. Its minute duration and certain lack of creativity may hold it back from being as great as some of the other new death metal offerings, but Auroch have all the right ingredients to cook up a noteworthy piece of their ever growing schizophrenic sound.