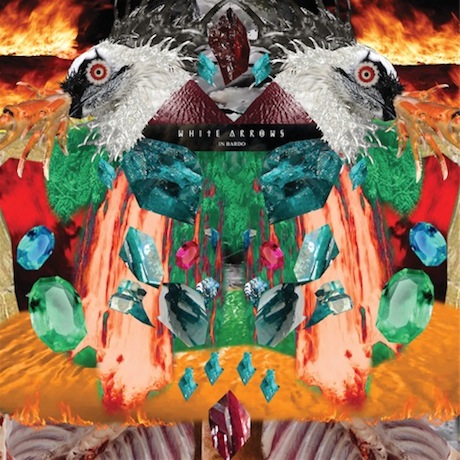 The sophomore album from California’s White Arrows, In Bardo, bears a curious, if apt title. In traditional Tibetan reincarnation mythology, bardo is the period between two lives — a transitional period, a karmic waiting room of sorts. The theme of transition permeates every aspect of the album, from the shifts in mood to the cyclical, spiritual anthem “We Can’t Ever Die.” The album allows us a first-hand look at the maturation of White Arrows as musicians. It’s cleaner, neater, and more accessible than debut Dry Land is not a Myth, but leaves the listener with the impression that there is more on the horizon. We are allowed to join White Arrows as they undertake their own spiritual and musical tranformations—their own treks through bardo.

While in bardo, a soul goes through two distinct phases. First, one feels the clearest experiences of reality of which a soul is spiritually capable, followed by a breakdown into horrific hallucinations arising from the decisions made while alive. The album follows a similar pattern of degeneration, as the songs toward the front of the album are easier, smoother, and infused with excitement, if not necessarily happiness. The first few songs are reminiscent of Empire of the Sun, albeit a little less dance-heavy and a little more angst-filled. As the album continues, the tone becomes darker, the noises more chaotic, and the rhythms more unsettling. This becomes especially noticeable in “Chill Winston,” probably the darkest song on the album. Yet they don’t abandon hope — as the album finishes with “God Alert Part 2,” the tone grows brighter, and the karmic cycle is repeated.

Between this album and Dry Land is not a Myth, White Arrows certainly grew up a lot, as is to be expected from any band. They have managed to more smoothly incorporate guitars into their hooks, whereas on Dry Land is not a Myth, it was either barely noticeable, or stood as an afterthought; something that was layered on top after the fact (except for perhaps “Getting Lost,” where the guitar is front and center). The guitar work on In Bardo feels more like an organic part of the process.

For In Bardo, White Arrows decided to enter a real studio and record songs with producer Jimmy Messer — a decision which paid off. Church’s vocals on the album are crisper and clearer to the casual listener than on Dry Land is not a Myth; Messer’s experience working with more vocal-centric acts like Selena Gomez, Kelly Clarkson, and Augustana certainly contributed to this cleaning up. Even on tracks like “Chill Winston” and “Nobody Cares” where the vocals are manipulated, the words come through clear as day.

But we must believe that White Arrows are not done transitioning, or that we have yet to see the finished product. For they are, as their album tells us, in bardo now. They are still transitioning, still growing. The transition didn’t occur between albums, we were given a front row seat to their transformation, and we can only hope that their next release will once again take us to places we’ve never been—or at least get there in ways we’ve never gone.