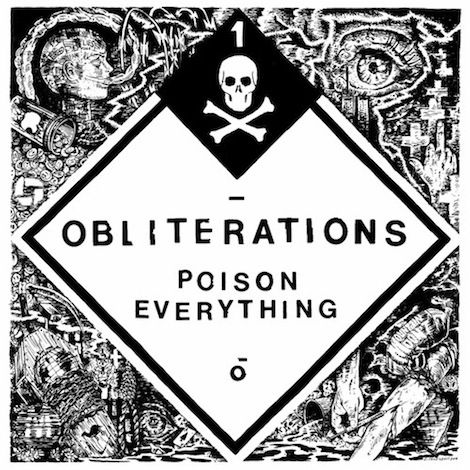 Hardcore supergroup Obliterations introduce themselves with an unintentional gesture of goodwill, righting two of the year’s most notable wrongs. One wrong concerns guitarist Steve McBean, whose Pink Mountaintops delivered one baffling head-scratcher of an album with Get Back — capped with the year’s most WTF let’s-offend-everyone song, “North Hollywood Microwaves” (it involves a lot of semen). The other, more important wrong concerns hardcore itself; it’s been a rough year for heavy music on the whole, with the strongest of the loud music batch coming primarily from doom metal bands (Pallbearer, Yob), while the crust punks and the bruisers have, by and large, had trouble surpassing the OK-not-great threshold. So I’ll just go ahead and let it slip right now that Obliterations’ Poison Everything is much better than merely OK.

On their debut album, Los Angeles’ Obliterations handily live up to their name, smashing, shattering and outright destroying everything in sight. They obliterate, alright, but they do so with a decidedly old school sensibility. Newly inked to Southern Lord Records — whose catalog of late heavily comprises bands influenced by Discharge and Entombed — Obliterations draw greater inspiration from early ’80s hardcore titans like Black Flag and Poison Idea, while keeping a crisp and punchy production style that keeps them from sounding like an actual relic of the 1980s.

As the album kicks off, it creates a kind of endurance test for the listener — there’s a blast of feedback on “Mind Ain’t Right” that lasts for 23 seconds. That doesn’t seem long in writing, but when the sound jabs straight at your eardrums, it feels like sweet relief when the group finally cuts through the squall with a blast of menacing power-chord violence. From that point, the pummeling is constant, the volume is cranked, and the obliteration cycle cannot be stopped. And that’s just fine — it’s a hell of a ride throughout, from Sam James Velde’s best Lemmy Kilmeister impression on “The Narcissist,” to the mid-tempo mosh pit crawl of the title track, on up to the Stooge-y punk ‘n’ roll of “Ad Nauseam.”

Of course, an album like this should turn out pretty awesome when seemingly every hand in it — or even marginally connected to it — is that of a veteran. Each of the band’s members has put in time in other bands (Bluebird, Black Mountain, Saviours and Night Horse), while producer Chris Owens and Kurt Ballou each have a résumé that extends longer than most people’s record collections. It was also recorded in Dave Grohl’s Studio 606, which is a fun factoid all its own. But no matter the names involved, or the history attached, Obliterations make one thing perfectly clear: They’re a classic hardcore band right down to the splintered bone.