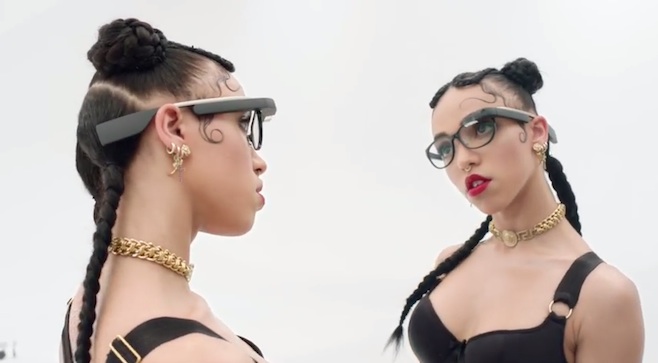 UK experimental pop artist FKA Twigs has a record of releasing interesting visual companions to her music, whether it’s the intimate clip for “Water Me,” or the much more opulent visual effects of “Two Weeks,” one of the highlights from her newest album LP1. Now she’s got a whole new, weird, technology-enhanced bit of visual art to show off. FKA Twigs has just released #throughglass, a short film that she directed for Google Glass, using Google Glass. Twigs uses the Google Glass technology to queue up some of her own jams, namely “Video Girl” and “Glass & Patron,” and then she and a series of other dancers engage in some pretty intense and dazzling moves. There are also some kinda creepy shots of people — including Twigs herself — with anime-style eyes painted on their eyelids. Pretty weird.

But believe us when we say that this a pretty spectacular two minutes of music and dancing. Google Glass isn’t necessarily known for being all that cool — we’re pretty sure you’ve heard all the jokes by now — but leave it to someone like FKA Twigs to make good on that. Watch #throughglass below.

FKA Twigs’ newest album is LP1, which was a recent Album of the Week.