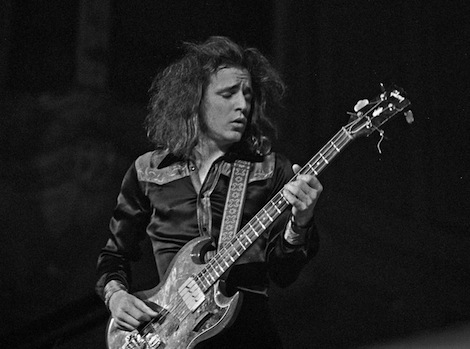 Jack Bruce, the bassist for psychedelic rock power trio Cream, has died. The BBC reports that the Scottish-born musician died in his home, surrounded by his family, and The Herald reports that the cause of his death was liver disease. Bruce was 71.

Born in Bishopbriggs, Scotland — a suburb of Glasgow — in 1943, Bruce attended the Royal Scottish Academy of Music on a cello scholarship. At 16, he left Scotland and moved to London, where he joined Alexis Korner’s Blues Inc., which also featured Rolling Stones drummer Charlie Watts. From there, he went on to perform with a number of bands, including Manfred Mann and John Mayall’s Blues Breakers, and eventually joined Cream with Eric Clapton and Ginger Baker.

Cream released four albums between 1966 and 1969 — Fresh Cream, Disraeli Gears, Wheels of Fire, and Goodbye — and operated differently than the other bands that Bruce had performed with. Everybody wrote songs, everybody took solos, and Bruce himself sang some of the band’s most well-known songs, including “White Room,” “Sunshine of Your Love” and “Tales of Brave Ulysses.” The group disbanded in 1968.

Bruce also had a long solo career, releasing his first album in 1969, shortly after Cream’s split. His most recent solo effort, Silver Rails, was released in March. Bruce’s career also included session work for Lou Reed and Frank Zappa, and performing with Lifetime with John McLaughlin and Ringo Starr’s All Starr Band.

Cream were inducted into the Rock and Roll Hall of Fame in 1993. Watch their 1968 performance of “Tales of Brave Ulysses” on the Smothers Brothers show below.