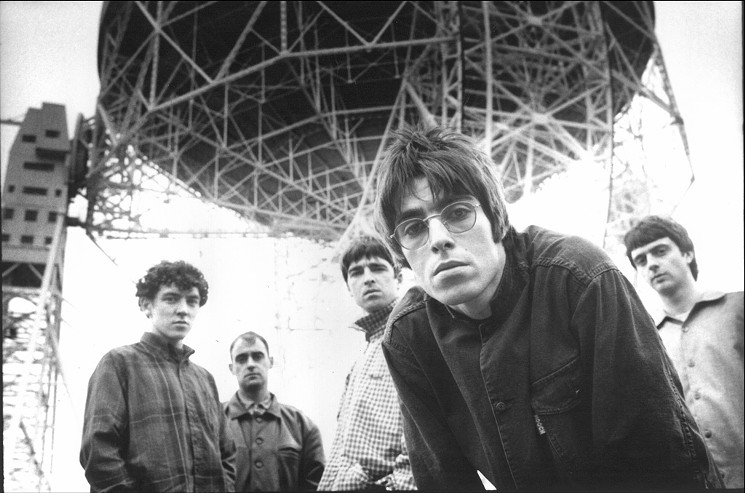 Maybe Oasis might have been the one to save us. It’s easy to forget after 23 years, but 1994 was a bit of a bummer. Music media was mostly consumed by the suicide of Nirvana frontman Kurt Cobain. MTV ran biographical tributes, soundbites of Courtney Love’s recorded message to fans (including a group “fuck you!”) made the rounds, and the specter of an overnight superstar cut down in his prime haunted alternative rock for…well, 23 years so far. There are still bands that go out of their way to borrow from and imitate Nirvana, and as 1994 segued into 1995, post-grunge—in all its constipated yarrling glory—was born.

But we had Oasis. A young group of Mancunians with shaggy haircuts, The Beatles catalogue and the Coca-Cola jingle at their disposal, Oasis offered something that grunge couldn’t: They dreamed big. Granted, Oasis had a lot of similarities with grunge bands, namely the drugs, guitars and attitude. But months after the death of a singer who released a song called “I Hate Myself and Want to Die,” Oasis made a hit out of a song that said “You and I are gonna live forever.” It was refreshingly hopeful and grandiose, the kind of statement that fell out of favor well before the ’90s painted over rock star ambition and excess with a crusty shade of beige. It was druggy but earnest. It felt good.

“Live Forever” peaked at number 2 on the Billboard alternative songs chart on February 25, 1995, during a time when the vacuum left by Nirvana’s absence left a three-way competition between separate but viable factions: Britpop, new-school punk and post-grunge. Some of the post-grunge was British, like angsty male models Bush, who borrowed liberally from Neil Young’s “Rockin’ in the Free World” on their Number 3 hit “Everything Zen.” Sure, it’s hard to take a line like “There’s no sex in your violence” as anything but a computer simulation of Cobain’s lyrical dadaism, but it’s hard to stay mad at a face as dreamy as Gavin Rossdale’s. Some of the punk bands wanted to sound British: Green Day’s Billie Joe Armstrong has lost his fake Cockney accent since going Broadway, but on Number 4 hit “When I Come Around,” you can essentially picture him practicing his Sid Vicious sneer in the mirror. There was even crossover between punk and grunge: The Offspring’s “Gotta Get Away” sounds pretty much exactly like a Nirvana song.

The Britpop explosion—and by extension the Blur vs. Oasis rivalry, the brief acknowledgment of Pulp and Elastica, and the total ignorance of Gene and Tindersticks—had yet to hit mainstream radio. “Live Forever” opened the floodgates in a way, such a catchy and life affirming anthem, making the airwaves safe again for brazenly pro-rock-star sentiments once buried beneath soiled cardigans and the Red Hot Chili Peppers sock hamper. There were other bands on Oasis’ coattails that fed into this narrative, like The Stone Roses, whose “Love Spreads” (Number 5) was such a bluesy, hammy stadium-rock move you’d almost forget this band once delivered the baggy chillout groove of “Fool’s Gold.” Then again, “I Wanna Be Adored” is kind of a come-to-British-Jesus festival hands-in-the-air moment, so it’s not like they didn’t have it in them. PJ Harvey’s “Down by the Water” (Number 15) is a similar story. Harvey had always been fairly abrasive, even for a grunge audience, but this three-chord gothic organ blues proved an unlikely radio success, its narrative of child murder apparently not repellent enough for program directors (God bless ’em, though that never seemed to work for Nick Cave). Though the weirdest and maybe coolest side effect of a brief flirtation with new British music in the ’90s was the ascent of Portishead, whose trip-hop spy vamp “Sour Times” landed at Number 8.

Occasional glimpses of the Union Jack weren’t enough to rid alt radio of its stompbox fetish, though. Grunge aesthetics were spreading like black mold throughout the charts. And that shit got everywhere. It got into the dreamy Irish pop of The Cranberries, whose smash hit “Zombie” (eh! eh! eh!) was at Number 34, on its way down from higher peaks in late 1994. It got into the music of R.E.M., whose Monster was basically a 40 minute exercise in getting everyone to forget how pretty Automatic for the People was. “Bang and Blame” at 31 and “Star 69” at 27 were proof that it worked, and that perhaps they weren’t half bad at being noisy scene vets, even if they were much better at letting their music breathe. Grunge also got into every new signing that major labels could throw at us, from pop band in disguise Veruca Salt (“Number One Blind” at 22) to proto-Creed Collective Soul (“Gel” at 16; pay close attention to that “yeeeuauuuuhhhhh”) to HEY THEIR NAME ACTUALLY RHYMES WITH GRUNGE band Sponge, whose mush-mouthed indecipherability in “Plowed” (Number 14) made it the new “Smells Like Nirvana.” A world of human cribbage? A world of humid cabbage? A world of Jumanji bricolage? A swirl of two-drink reggae bands? Yes!

The one trend that actually made sense in terms of usurping the grunge throne, however, was punk. Grunge was essentially punk but slower, so all a punk band with mainstream ambition really had to do was put a few grunge-like songs on their records. The Offspring and Green Day, as previously mentioned, did that. So did Bad Religion, whose “Infected” is one of the best grunge songs by a non-grunge band to hit the alternative charts. Then again, as Cheech and Chong proved, to play punk you just gotta be a punk, and Rancid did just that with “Salvation.” They wrote better songs later, but the punk bandwagon and Tim Armstrong and Lars Frederiksen’s dueling mohawks were enough. I remember vividly being in junior high and hanging with dipshit skaters who judged everything on how punk it was. Rancid passed the punk test with flying liberty spikes. Hum apparently did not (who are not on this chart, though “Stars” would in a matter of months).

For as much as early 1995 was a study in what the next grunge would be, it bore some unexpected successes that now seem like quaint relics. Former no wave and industrial weirdos The Wolfgang Press, for instance, scored a minor hit with “Going South” (Number 33), as did The The with a Hank Williams cover of all things (“I Saw the Light” at 24), Throwing fucking Muses (“Bright Yellow Gun” at 21, hell yes) and Belly, featuring former Muse Tanya Donnelly, whose “Now They’ll Sleep” just barely cracked the top 20. It’s really strange to think that 4AD Records would have such a strong presence on mainstream charts at this stage in rock history. It was a weird time. A cool, fleeting, but really weird time.

February of 1995 also gave us more Nirvana. Released in late 1994, MTV Unplugged in New York provided modern rock radio with its fair share of new Nirvana singles to milk, since there would never be any new Nirvana songs again (which wasn’t really true, as 2002’s “You Know You’re Right” proved). Three months after its release, the band’s cover of David Bowie’s “The Man Who Sold the World” reached number 7, reminding us that for all the wreckage that grunge hath wrought—and would wreak more egregiously later in the decade (hi, Creed)—Cobain still had unimpeachable taste.

America wasn’t ready to forget about Kurt Cobain. It never will, and it still finds ways to profit from his legacy. But it took some shaggy-haired wankers from the UK to remind us that sometimes a group of Brits with jangly guitars can prove to be an enchanting lift out of our collective malaise. We could still mourn, but that shouldn’t stop us from wanting to live forever.