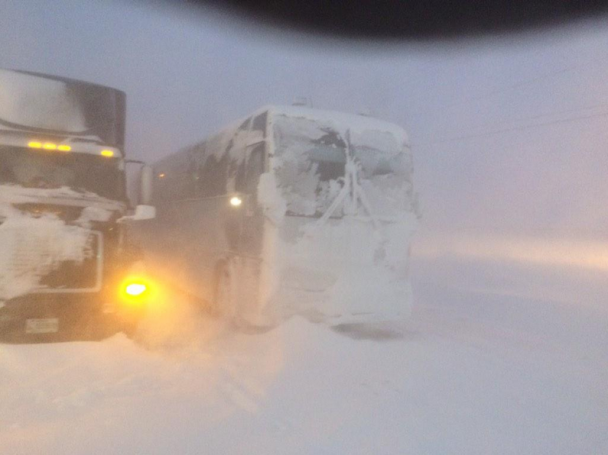 The winter weather is taking a pretty brutal toll on the east coast and midwest right now — and it’s not even technically winter yet! And one band who has been caught up in it is Interpol, who has been stuck in a Buffalo snowstorm for 40 hours. The group has been on tour supporting their new album El Pintor, and had just played Newport Music Hall in Columbus, Ohio. While en route to play their Toronto show on Tuesday, they encountered a pretty nasty snowscape in front of them, which turned out to be a bit more than their bus could plow through.

The band had to cancel the show, and posted the following on their website: “Dear Toronto, Our bus is trapped in a snowstorm just outside of Buffalo. We haven’t moved our position on the road in over nine hours. Unfortunately, we’ll have to cancel tonight’s concert at the Kool Haus. We were greatly looking forward to the show but the big bad winter has come early this year. We will be informing people of a new date as soon as we can.”

So, since then, the band hasn’t moved, and are still in a holding pattern in their tour bus as they wait out the snow. Might be time to hibernate. Check out some of the tweets that Daniel Kessler has posted during their uneventful between-show break.

Hour 13 trapped in the snow. Dry goods and vodka. We will make it. -DK pic.twitter.com/bEQhaUokKi