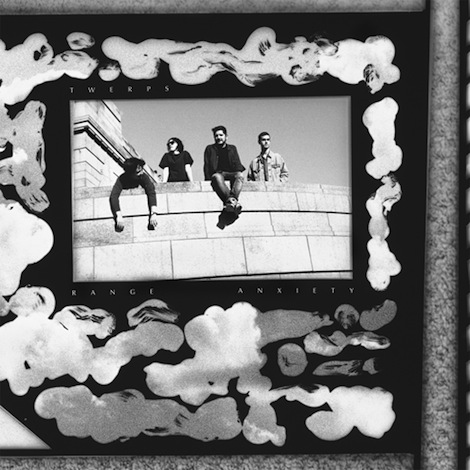 “Somebody out there is doing better than me,” sings Twerps frontman Martin Frawley on “Back to You,” the third track on Twerps’ third album, Range Anxiety. “Somebody out there is buzzing like a bee.” Without even giving it too much thought, it’s logical to assume that the second “somebody” he’s talking about here is actually himself. Perhaps he’s carrying some angsty weight with him, but he and his band buzz with manic, insect energy, fluttering and bopping around with an infectiously manic, teenage giddiness. Not that they’re actually teenagers — their facial hair should give as much away, and more importantly, they’ve been together for seven years. Twerps aren’t novices, newbies or greenhorns; they just happen to possess a certain kind of youthful feeling — the same kind of feeling that has been compelling kids to pick up guitars for going on six decades now.

Range Anxiety is the Australian band’s first release for Merge Records, and as such, it represents a new phase of sorts for the band after two self-titled releases, one of which was cassette-only. On those records, the band displayed the kind of lo-fi fuzzy charm that occupied the space of albums by the likes of The Chills, The Pastels or The Go-Betweens — a talking point about the band that became almost cliché before anyone stateside even knew who they were. But it’s also entirely fair, given the kind of itchy, upbeat and endlessly catchy tunes the band cranks out so effortlessly. Those reference points haven’t necessarily been abandoned on Range Anxiety, but it’s also too lush and crisp sounding an album to be lo-fi. This is professional quality jitter and jangle, and it sounds spectacular.

As a general baseline, everything on Range Anxiety is gorgeous. Their charged-up numbers like “Back to You” and “Stranger” are awash in lush sheets of clean-tone chords, while slower-moving tracks such as “Shoulders” or “I Don’t Mind” have the sedate stateliness of a Yo La Tengo or Velvet Underground ballad. In fact, the latter feels like a particularly laudatory accomplishment for the band, allowing them to stretch out and let more space into their otherwise shimmering network of major chords and arpeggios, and end up with something that feels even fuller than the moments where every layer seems to be stacked up high enough to graze a flying nun. What’s more, Frawley seems to be suspended in a zen state of ambivalence, singing “I don’t mind if you stay/ I don’t mind if we wait” as if to deny any haste in order to become one with the gauzy sheets of sound that surround him.

It’s interesting to hear Frawley so nonplussed, since so much of the album comprises his and Julia MacFarlane’s sighs, laments and general sense that things aren’t really where they should be. He cries, “I’m jumping out of my skin,” on “New Moves,” and chases a girl not only out of his league, but seeming to possess every quality he doesn’t on “Love at First Sight.” This is pretty much par for the course for Twerps, whose songs are so carefree on the exterior, but have the slightest melancholy bruise just a little bit deeper down, if not actually a genuine sadness. They play music that sounds young, and imbue them with the kinds of problems that young people generally struggle with. It’s a formula that’s as old as time itself, but then again, it ain’t broke.