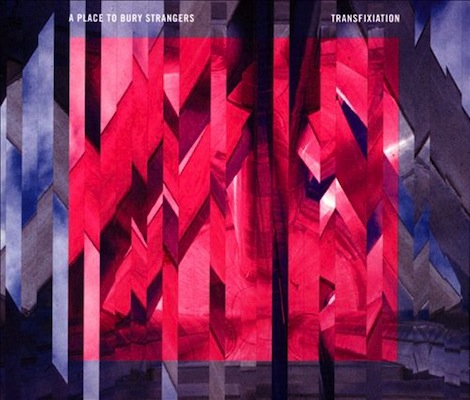 What if we started thinking of A Place To Bury Strangers as more of a continually evolving punk band and less like shoegaze revivalists? The Brooklyn noisemakers have an attitude, carry blatant volume wherever they go, and do not adhere to any My Bloody Valentine rip-off template that some may think they’re playing from. A Place To Bury Strangers has blazed a loud and noisy trail of its own maelstrom despite having a Psychocandy reference thrown its way in almost every write up of the band.

The band’s fourth album Transfixiation isn’t as rewarding as APTBS’s first two ear-shatteringly awesome LPs — A Place To Bury Strangers and Exploding Head — but its disregard of limits makes it interesting. Transfixiation is an erratic record. Effects aficionado Oliver Ackermann (who builds pedals for himself and other musicians of note) and the rhythm section of bassist Dion Lunadon and drummer Robi Gonzalez treat each song as a blank canvas. “Supermaster” is a quivering, coiling shade of florescent colors; “Straight” is a mutating, robotic arm equipped with speedballs of disassembled guitar parts that shoot all over. A Place To Bury Strangers fucks with its material aplenty, and since the clarity is so abundantly clear here, Ackermann must have spent considerable time at the editing desk. Or, knowing of his vast inventory of Death By Audio effects pedals, maybe he just hooked a bunch of devices together on the floor and let his Fender Jaguar rip. But the chaos is too controlled.

Shoegaze revivalists wouldn’t make an evil, unsettling track like “I Will Die,” or anything on Transfixiation for that matter, except maybe “What We Don’t See,” Ackermann dialing up his tremolo-effected guitar for a comparison to My Bloody Valentine. “I Will Die” is the primitive punk rock treat at the end of the album. You can feel the storm coming as abrasive noise takes a little time to creep in, coming in fully blown as Ackermann shouts, “I will die again, and again, and again” over a napalm bomb of noise that is a beautiful piece of brutality. “I’m So Clean” is damaging, too, lacerating with a squally quality into “Fill The Void” as APTBS has its well-oiled rhythm going into the final stretch.

Transfixiation is another positive step for A Place To Bury Strangers, but there’s trouble in its middle section. “Deeper” trudges along for six minutes, and tries too hard to be scary. The deep bass drum and trash can lid snare is cool, but a passage like “If you ride with me, you’re gonna burn / if you fuck with me, you’re gonna burn” leaves room for creativity in a song that could afford to be looser for its extended run time. The following instrumental, “Lower Zone,” is dreadfully inessential when held up to the rest of Transfixiation.

A Place To Bury Strangers knows that music isn’t rocket science. They keep it simple and rock it hard. Really hard, actually, and with astounding clarity. Transfixiation is an apt title; APTBS can leave a listener motionless, horrified, wondered, or astonished. And if we’re talking about being transfixed by one implement in particular in this case, it’s Ackermann’s effects-fueled guitar that can still make our ears bleed.