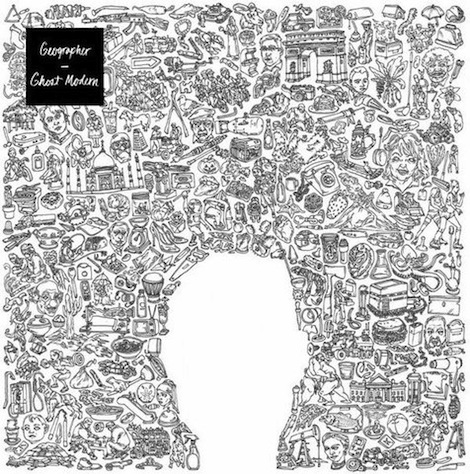 Geographer‘s love affair with synthesizers couldn’t last forever. On their third album, Ghost Modern, Geographer have escaped their previous dependence on synthesizer led indie-pop songs to create a multi-layered, rich sound that infuses elements of various genres, from new wave to ’90s alt-rock, with some modern indie pop in between. It’s not that Geographer has altogether abandoned synthesizers; they’ve simply progressed to a point where the synth is written for the song, and not the other way around.

Ghost Modern‘s structure is engineered for vinyl, divided neatly into two distinguishable sections. After a brief “Intro,” the first half begins with “I’m Ready,” which is the best song on this side, and essentially on the whole album. The song layers keyboards, synth sounds, and strings seamlessly, creating gentle waves of sound which you can almost feel swaying against you. The next four songs are all relatively straightforward, which isn’t to say they’re boring or basic. They’re just as sonically layered and rich as the latter half of the album, just more simplistic in many ways. “You Say You Love Me,” for example, sounds like it could break into Top 40 radio rotation.

With a flip of the platter, the second side of Ghost Modern presents the more interesting half. It starts with “The Fire is Coming,” wherein Geographer earns their alt-rock street cred. Driven by drums, and dominated by bass, it almost feels out of place in the indie-pop sea, until Michael Deni starts singing and brings it back. “Patience” slows it down, offering a reprieve from the aggression (or as close as we get to it on Ghost Modern) of “The Fire is Coming.” The song is Ghost Modern‘s sole ballad, falling somewhere between a love song and an internal pep talk. The strings used on this song are the best anywhere on the album; their plaintive, lilting melodies alone are almost enough to bring tears to your eyes. Ghost Modern finishes on a strong note with “Falling Apart,” which seems heavily influenced by Arcade Fire’s Funeral, Specifically, in the emotional march of “Wake Up.” The song defies expectations, because it feels like it’s about to get harder, as though it’s building to a climax that never comes, yet not disappointingly so.

The album isn’t all that groundbreaking when all is said and done, however. There’s a sense of familiarity one gets when listening, and this clashes with its novelty. It’s enough to make you wonder if you’ve heard the songs before, even though you haven’t. Songs like “You Say You Love Me” and “Keep” seem as if they could have been plucked from a Duran Duran or Flock of Seagulls record, just as easily as on Geographer’s. The lyrics contribute further to the sense of familiarity, in the sense that they are almost entirely composed of clichés. The song “Patience” includes lines “Patience/all my patience is gone late/I just can’t keep holding on till tomorrow” and “patience is a virtue.” Even where they aren’t cliches, the lyrics are mostly dull. Perhaps the lyrics weren’t meant to be the focal point of any of the songs, but when so many of the songs are driven by the vocals, then it’s worth suggesting they could have been better written. The lone exception seems to be “I’m Ready,” which makes a game early on of subverting cliches instead of relying on them. Not every detail holds up, but even in its flawed form, it’s best listen to Ghost Modern either very loudly or on headphones — it’s the only way to truly appreciate its subtlety.