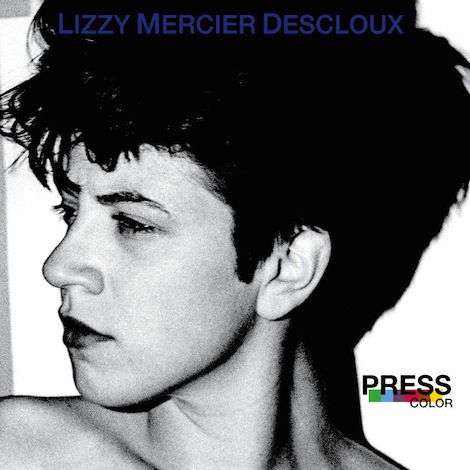 New York City in the 1970s is the stuff of legend. Depending on who you’re asking, and how they remember it, it was either the urban hellscape as depicted in Martin Scorsese’s Taxi Driver and terrorized by Son of Sam, or it was the fertile epicenter of a pop music revolution. All of these are true to some degree, but it’s the music that has the longest lasting legacy. And what a legacy it is: Studio 54, CBGB, No New York, and the dance-punk renaissance of ZE Records. It was on ZE where French ex-pat Lizzy Mercier Descloux released most of her weird and wonderful discography, starting off with the peculiar punk-funk of 1979’s Press Color. An artist, singer, actor and performance artist, Descloux had a hand in various aspects of the New York art scene, and the company she kept put her in an elevated league, though her music itself has remained largely obscure from its release. Hearing her debut, 36 years later, that’s not necessarily all that surprising. What’s more revelatory is how fascinating it remains.

Newly reissued by Light in the Attic, Press Color is a strange little album. I mean that in the best way, of course. Released two years after she moved to New York, and a bit longer after befriending local icons Richard Hell and Patti Smith, Descloux’s debut is eight tracks of quirky, agitated funk with all the snotty ‘tude of punk and a weirdly playful sense of humor. It’s anchored by a handful of covers; the runaway track is Descloux’s cover of Arthur Brown’s “Fire,” which has been solidified in the archives as Descloux’s signature song. Its mutant disco, driven heavily by the rhythm section of Ken Smith and Jimmy Young, and though it never caught on to a level of fame along the lines of, say, Blondie’s “Heart of Glass,” its place in the dance-punk canon is a gilded one. Elsewhere, Descloux and her band tackle the “Mission Impossible” theme with rhythmic chug and jangle, and torch-song standard “Fever,” under the name “Tumour,” turning a sexual metaphor into a snarkily disturbing one.

Though its prominent use of covers made Press Color in a league with a lot of other pop records in the 1970s, at the time, not much sounded like it, save for other releases on the no wave and mutant funk haven of ZE. It’s a supremely funky album, with tracks such as “Aya Mood” and “Wawa” juxtaposing the pulsing low-end of disco with the jittery atonality of no wave. Elsewhere, “Torso Corso” dispenses with the funk entirely, instead favoring a two-minute post-punk creep, while “No Golden Throat” is a scratchy strut of punky reggae. And while, stylistically, Press Color is all over the place, its aesthetic is singular, both inside the groove and outside of conventional melody or song structure.

Press Color‘s bonus material is just as long as the album itself, but considerably weirder. Much of it leans more directly toward abrasive no wave sounds (“Rosa Vertov,” “Decrypted”), while others veer into drone (“Birdy Num-Num”), lounge (“Hard-Boiled Babe”) and an experimental spoken-word duet with Patti Smith (“Morning High”). In fact, the abrasive and disorienting nature of the extra tracks gives more of a window into the atypical artistry of Descloux, who died at age 47 in 2004. The music on Press Color that sounds like pop—that comes anywhere near the universe of a hit song—is the minority here. But it’s ultimately the freak in the funk—the itchy, arty fire within it—that makes those pop songs such interesting artifacts.