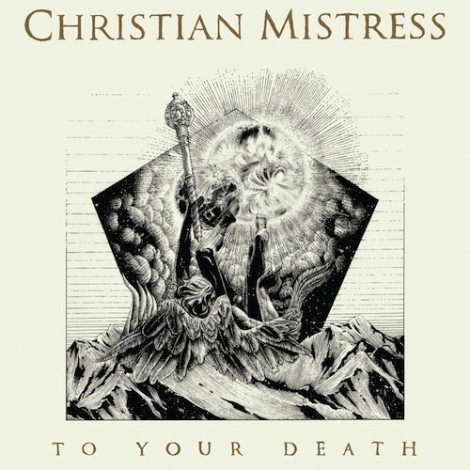 Just about everything written about Olympia, Washington heavy metal outfit Christian Mistress slants dramatically toward the vintage nature of their sound. The word “retro” follows them like knife-wielding maniacs lurch in pursuit of coeds in ’80s horror flicks. There’s a kernel of truth to it: Christian Mistress have, since debut album Agony and Opium in 2010, displayed a penchant for two-guitar heavy metal with a strong influence from pioneers such as Judas Priest or Iron Maiden. And that’s not accidental either; Christian Mistress wear those classic metal patches close to their hearts on their denim vests.

The spirit of classic heavy metal runs through Christian Mistress’ veins, but it’s not necessarily what the band is—not exactly. Over time, Christian Mistress has expanded from a more straightforward heavy metal band hell bent for leather to one with a bit more boogie in their rhythms. With To Your Death, they deliver their most diverse set of songs yet, still furiously driven by their dual-guitar attack, but opening up their heavy metal sound in interesting ways. There is reverence to an old-school ideal on To Your Death, but not at the expense of Christian Mistress’ own identity or, more importantly, writing a really good song, of which there are many here.

The melodic drive of crunchy leadoff track “Neon” has a steady strut to it, as much AC/DC as Priest, but at a speedier tempo, it could just as easily be a great punk song. And “Stronger Than Blood” shuffles with the badass boogie of Thin Lizzy. These are already strong tracks from an instrumental standpoint, yet vocalist Christine Davis’ raspy belt is what ultimately makes the difference, her earthy pipes a much more human and ultimately compelling vocal style than the unintelligible hardcore bark or black metal hiss that so many metal singers fall back on. So for as much righteous riffage as Ryan McClain and Oscar Sparbel inject into a highlight like “No Place,” it’s the soulfulness of Davis’ voice that transforms it into something bigger and more interesting.

None of which is to say that the songs themselves don’t hold their own: The Deep Purple-inspired road-warrior anthem “Open Road” is as much fun as you can have with power chords, and the atmospheric power ballad “Lone Wild” may very well be the best song here, closer in execution to Alice In Chains’ “Down in a Hole” than, say, “Children of the Damned.” And that’s a good look for Christian Mistress. Not that they’ve gone grunge, exactly, but more than ever, To Your Death shows off their versatility as a band. Christian Mistress channel the spirits of metal’s past, but give them new life in a surprisingly refreshing vessel.

Dawnbringer – Into the Lair of the Sun God

Stream the new Christian Mistress album, To Your Death