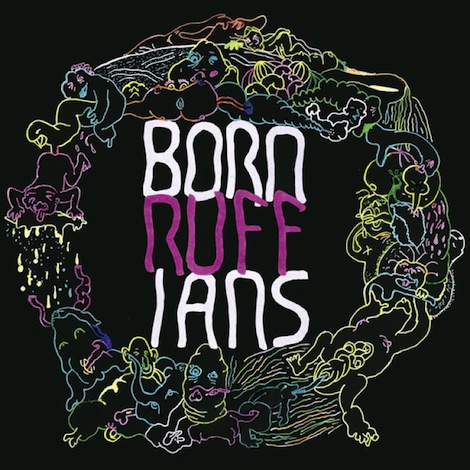 Born Ruffians were in an enviable position in 2007. They were a guitar-based Canadian indie rock band during a time when being a guitar-based Canadian indie rock band pretty much guaranteed you press coverage on music blogs. They had released a strong and wiry debut EP and they had inked a (surprising) deal with Warp Records. To top things off, their endearing and great debut album, Red, Yellow & Blue, was just a year away. After this, however, their quality control began to go downhill. The band’s sophomore album Say It seemed hell bent on removing the nervous energy that defined their best work and flattening Luke Lalonde’s usually buoyant voice.

Their third album, Birthmarks, wasn’t a return to form but a solid set of tracks all the same. It’s the type of middle-of-the-road indie rock album that were a dime a dozen in the 2000s (think French Kicks, White Rabbits, etc.). RUFF finds the band in the same mode: not as amateurish as their most cloying work, but lacking the formidable qualities that made their earlier tracks stand out. The album finds the band sounding like an amalgam of the Pixies at their most melodic and The Walkmen at their most disciplined. It never comes close to approaching the heights either of those bands reached, however.

“Don’t Live Up” starts the album off with promise, as it sports a skewed energy that bubbles underneath the surface of what is essentially a straightforward pop song. “Stupid Dream” wipes it all away, however. It’s a perfectly serviceable song, catchy in places and totally non-offensive, but not particularly memorable. Many songs on the album fit this mold: honestly decent with a solid set of hooks, but lacking in staying power. Lalonde’s lyrics get somewhat salty (throwing a line out about his cock here and tossing out a retort about eating shit there), but overall it’s all a very pleasant affair with no real aftertaste to speak of.

My assessment might seem harsh, but only because this is a group of songwriters who are completely comfortable being in cruise control. Look no further than “Don’t Worry Now,” a track that barely acts as a song sketch. The song’s a short fragment that should have ended up on the cutting room floor, swept into the garbage and rightfully forgotten. Every once in a while, a moment will erupt into a brass reverie or string laden sweep, as if to highlight a moment of triumph. Instead, it only serves to cover up a musical idea that lacks dynamism. Only the low, burly “Let Me Get It Out” stands out (studio flourishes aside).

Two songs with boasting titles, “(Eat Shit) We Did It” and “We Made It,” appear back to back on RUFF. The songs themselves are pretty self aware, but to be fair, Born Ruffians have made it. They have a decent fan base and have fallen into the habit of releasing pretty-good-but-not-great albums. They’re nowhere near where you would have assumed they’d be back in 2007, but at least they’re consistent.

The Walkmen – A Hundred Miles Off

French Kicks – Trial of the Century