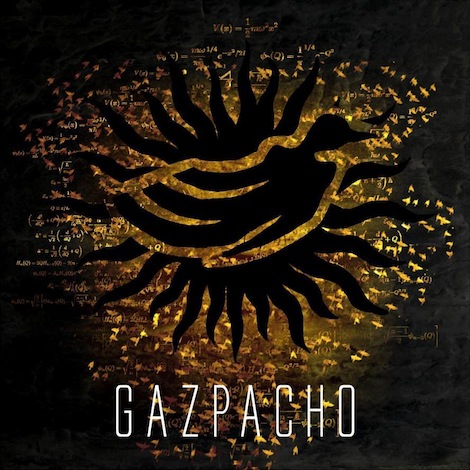 Gazpacho has been on the prog-rock radar for almost 2 decades now, but their latest albums have shown impressive refinement, as well as an evolution towards denser, more progressive musical themes and concepts. Since their noticeable turn for their dark with Missa Atropos, Gazpacho has grown in sophistication and recognition with each release. March of Ghosts was an incredible offering, and the haunting Demon was nothing short of a masterpiece.

Molok follows the modern trend of modern progressive rock bands, in which they ambitiously take on weighty philosophical, theological, existential themes through their music in concept album form. Dream Theater wrote their seminal rock opera, Scenes from a Memory as an exploration of reincarnation. Pain of Salvation wrote their ridiculously pretentious magnum opus, Be, as a series of ruminations on God, man and existence. With Molok, Gazpacho joins the ranks of these fellow progressive rockers, writing an album that is an exploration of man’s fascination with divinity that is both musically and conceptually dense. However, Gazpacho manages to achieve something with Molok that eluded the other aforementioned bands—they present their complex story in a way that is thoughtful and ambitious, yet somehow unpretentious. The music and lyrics work in conjunction throughout the album, and one never overshadows the other.

The principal theme of Molok is the conflict between a scientific, deterministic view of the universe in which mysteries can be solved through science and investigation, and the idea that the universe is boundless and undiscoverable and mysterious. However, as the band describes, “once you go deep enough in both scientific or religious ideas, they start to resemble each other up to the point where they are difficult to separate.”

In typical progressive fashion, Molok was preceded by cryptic press releases, explaining that, through some technological anomaly, the CD version of the album could potentially destroy the entire universe. While a bit of a stunt, it was a prefiguration of the album’s central themes: technology and man’s search for God. The protagonist of the album is a man who, disillusioned by religion, decides to turn to science to understand divinity, and builds a massive machine called Molok so that he can see into God’s mind. His machine is able to calculate the position of all matter, and, miraculously, does in fact find God in the numbers (only after inadvertently destroying the universe). [As a slight aside, the name ‘Molok’ comes from an ancient god that was worshipped by the Canaanites and Phoenicians, and was a God commonly associated with child sacrifice (Leviticus 18:21: “And thou shalt not let any of thy seeds (children) pass through the fire to Moloch“).]

The album begins with “Park Bench,” a breathtaking, ephemeral track that features some tribal instrumentation and a church choir, and acts as an introduction to the characters and themes. The scintillating “Master’s Voice” continues with the subdued atmosphere of the opener, asking existential questions as the instrumentation progressively gets heavier. The next song, “Bela Kiss,” features some brilliant accordion work from Stian Carstensen, a member of Balkan-jazz orchestra Farmers Market. In an album that is undeniably dense, this song sticks out as a fun romp through Paris in the ’20s (and has become a favorite track for my kids to dance to).

“Know Your Time,” the first single released from the album, is a dark and atmospheric journey. Gazpacho has fine tuned their songwriting skills, and are somehow able  to create beautiful, brilliant, dense songs that can also get stuck in your head (a skill not often found among art rock and progressive rock bands), and “Know Your TIme’ is a perfect example of this.” The delicate, yet anthemic “Choir of Ancestors” features beautiful male and female vocals, joining together to celebrate the mysteries of human experience. “ABC” begins with the line, “The rays of light from outer space/Are the curved red line of ancient caves,” as the protagonist decides that he will take his machine out to a secluded cave, the place where our ancient ancestors worshipped and venerated their prehistoric Gods.

“Molok Rising,” the longest song on the album, is a behemoth of a closer. As the Molok machine begins to cut through time and space to search for the divine, the song takes the listener back to the Stone Age, and we are able to hear and imagine our caveman predecessors, playing on handmade drums and flutes. The instruments used were crafted by archaeologist Gjermund Kollveit to simulate the sounds of some of the oldest instruments discovered. The song starts off tense and maddeningly suspenseful, and the tension is relieved quickly and abruptly at the end, as you hear the machine turn on, followed by the sounds of the universe screeching to a halt.

Molok aims to be a unique, compelling, and mystifying musical journey, and it achieves this handily. While Demon and March of Ghosts both feature some of Gazpacho’s best songs, Molok is a perfect combination of strengths of the previous two albums. It pairs the shorter, more palatable song format of the latter with the haunting brilliance of the former. While there is a slight lull in energy near the second half of the album (possibly caused by the inclusion of “Algorithm,” the CD-only track), it never bores. It is important to state that the album can’t fully be appreciated in one listen. It warrants careful listening. It took a few spins for me to begin to grasp some of the depth of the album, and even many listens later, I still hear new things each time. Molok is a worthy offering from one of progressive rock’s finest acts, and just like the most compelling works, it leaves us with more questions with answers.