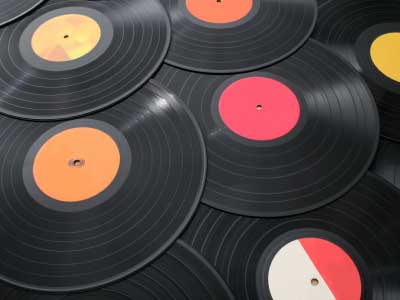 The first time that anyone steps into my house, he or she often expresses a kind of shock or disbelief upon seeing my collection of CDs and LPs. Packed into a shelving unit from Ikea, comprising multiple cubes, it essentially takes up an entire wall in one room, leaving a little room on the margins for books and other storage. It’s a pain in the ass to move, proves extremely time consuming to reorganize whenever new room needs to be cleared, and after having been leapt upon numerous times by my cat, tends to lean a bit to one side.

As burdensome as maintaining a large collection of physical media is, particularly with digital media’s constant evolution to more convenient solutions (iCloud anyone?), I have yet to reach a point at which I’m ready to sacrifice much of it, particularly vinyl, to which I have the highest affection. Yet, when confronted by someone viewing this towering monolith of recorded sound, I often receive the most important logistical question of all: How do you have time to listen to it all?

It’s a fair question, and one that rarely exits my mind. The short answer: I don’t. Some albums go unlistened for months, even years at a time. And sometimes, I just feel like listening to This American Life instead. But the longer answer is that, despite the absurd amount of music I’ve amassed, a sizable chunk of it in the form of record company promos, I do, eventually, get around to just about everything. I go through periods of nostalgic reappraisal, or sometimes listen to music only from a certain decade, and other times still, spend a week or so devoting my time to one artist’s entire catalog.

There is, however, an entirely different can of worms when it comes to digital media. According to iTunes, at the time of my writing this article, my library contains 17,985 songs, or a little more than 50 days worth of music. Much of it comprises music that I own in some form of physical format, though there are likely hundreds, maybe even a thousand or two songs that, as of yet, only appear on my hard drive. That is most definitely a lot of music, and no, I know very well that I don’t get around to listening to it all. But a new study indicates that the average listener falls into similar habits.

Mobile music firm Music WithMe recently released a statistical analysis of its users’ data, while keeping its users anonymous, which showed that, on average, 81 percent of a music library goes completely neglected. That means the vast majority of songs in a given iTunes library go entirely unheard. And to put that in more concrete numbers, the firm stated that the average user’s library contained 5,409 songs, of which 4,195 have never been played.

Two things strike me about this analysis. First, though reasons and motives behind these habits likely depend on a per-user basis, it shows that the average person most likely has a set playlist of staples, or comfort songs. It reminds me of a common defense I heard in the early days of Napster, the oft-repeated line that free downloads were justified in the face of record companies charging close to $20 for “one or two good songs.” The second thing that strikes me, however, is that despite more than a decade of widespread downloading and file-sharing, a library of 5,409 songs doesn’t seem all that excessive or unmanageable. It’s likely a higher number of songs than the average person might have if he or she were to consume physical media only, but not especially indulgent when compared to the most die-hard music obsessives out there.

Ever since the floodgates opened at the end of the ’90s for peer-to-peer MP3 swaps and the subsequent rise of Mediafire and Rapidshare, a kind of digital hoarding culture emerged. While the average person may cycle through the same 1,214 songs, a minority of users are buzzing through thousands on a regular basis, likely listening to a much higher number of songs on average, but very possibly collecting many files that will be heard only once. RateYourMusic, a site that exists primarily for the most music-obsessed among us, is a community in which you will find countless examples of unwieldy and overwhelming collections. A handful of users, for instance, have already rated more than 150 albums released in 2011 (with five months left in the year), and another made public a list of every album on his 160GB iPod, which, extending well past 1,000 albums, seems to indicate every last gigabyte is occupied.

At first glance, this looks like data storage run amok, but on the other hand, these users are also keeping close tabs on what they’re listening to and what they own, making it all the more probable that they are actually listening to this much music, even if over an extended period of time. When I look at my own iTunes library, however, I find that, of my almost 18,000 MP3s, 5,736 haven’t been played, which means I’ve listened to more than two-thirds of these songs at least once. Not bad! And when you factor in that iTunes only records play counts after a song has played through to the end, there are likely a few more that I’ve listened to but paused mid-way through, and some that I’ve sampled without giving my complete attention, which, I admit, is almost like not actually listening to it at all.

Netflix queue and not you

One thing that the Music WithMe study does not reveal, though I’d be very curious to find out, is the actual content that gets played versus that which goes ignored. Are people primarily listening to singles? Does nobody have time to listen to a whole album? Do they build up collections of songs from a single artist that, while satisfying the completist, prove to be a chore to sit through? These are all possibilities, though Occam’s razor leads me to believe that most people stick to the hits. This data may require some cross-pollination with Last.fm stats, but as far as I know, has not been published in an easily accessible public forum. Yet I discovered an article in a recent issue of Wired that pertains to Netflix queues, which I couldn’t help but find analogous to the iTunes study.

According to the article, Netflix’s system of unlimited number of DVDs by mail often resulted in subscribers watching only a small percentage of the movies on their queue, simply because they had trouble deciding what to watch immediately. And, even more fascinating, the article mentions a paper written by Daniel Read that sheds even more light on this kind of behavior. Read found that, when asked to choose from a list of highbrow films and lowbrow films, subjects would frequently place highbrow films on a list of movies they’d like to watch in the future, but when asked to pick one to view right away, the subjects most often chose the lowbrow title.

The widespread availability of free (and yes, often illegal) music makes the possibilities for listeners endless, but it can also lead one to be overwhelmed or fatigued. And no doubt there are countless among us whose libraries contain a variety of highly acclaimed arty albums that, canonically speaking, we should have, but possibly never listen to. And I’m all too aware of similar circumstances in my own library. Bob Dylan’s The Basement Tapes has very few play counts, for instance, simply because it’s so long and so disjointed that listening to it is best left in pieces, even if I haven’t made much of an effort to do so. And I’ve apparently only made it to the end of one track on Gas’ Pop, despite having invested a considerable amount of time in ambient and electronic records in the last year or so. And, perhaps the least surprising to me while also one that I know deserves more effort on my part, more than half of Sigur Rós’ Agaetis Byrjun is flanked by a blank field.

There are also many instances of an album’s final track never getting a proper play-through, as well as recent additions that I haven’t given a spin, or bonus tracks that I frequently overlook. But the more attention I give to these unheard tracks, the more likely I am to want to correct my errors and give these songs the attention they, apparently, never received. Or at the very least, I can clear out the hard drive space. But as I often observe through writing reviews or exploring different genres, music can often give back what you put into it. So, right now, maybe I like the idea of having Gas’ Pop in my library more than the desire to actually listen to it. But I can choose to change that, and more than ever I feel the impulse to actually do so. So, then: 12,249 down, 5,736 to go.