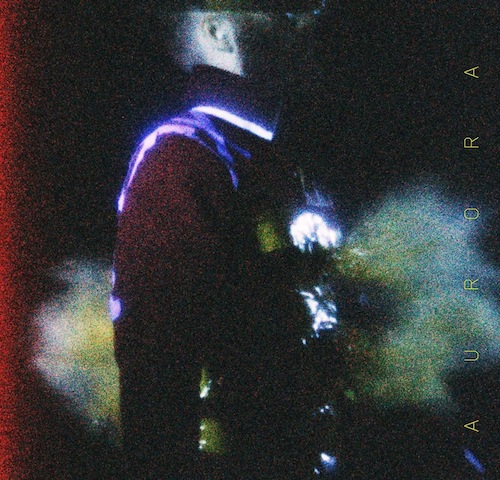 Ben Frost‘s last album — not counting a string of minimal film scores he recorded and released in the years since — was called By the Throat. It’s album art depicts a man cowering behind a pack of wolves in a heavy flurry of snow, illuminated by the glow of a truck’s headlights. And all of the 2009 album’s eleven tracks more than lived up to the spine-tingling promise of its aggressive, viscerally evocative title. His compositions aimed straight for the jugular, whether via distorted violence in “Killshot,” tense heart-monitor dronescapes on “O God Protect Me,” or as a gracefully harrowing descent — complete with wolf howls — in “Leo Needs a New Pair of Shoes.” It seems wrong to call something this emotionally captivating “ambient”; this isn’t music that lingers in the background — it demands reaction.

A U R O R A, Ben Frost’s fourth album and first to be released on Mute, is — if anything — even more intense than the menacing masterpiece that preceded it. It’s a much more physical album, largely dispensing with quieter, more delicate compositions in favor of those that seethe and erupt. Frost’s pool of collaborators on A U R O R A deserve considerable credit; much of the physicality and driving force of the album is put in motion by drummers Thor Harris (Swans, Shearwater), Greg Fox (Guardian Alien) and Shahzad Ismaily (Secret Chiefs 3, Marc Ribot’s Ceramic Dog), who propel Frost’s electronic movements with an almost primal, volcanic power. As such, the album feels more industrial than ambient, but driven by the awesome machines of nature rather than those built by man.

This isn’t so much a follow-up to By the Throat as it is an escalation. With A U R O R A, Frost doesn’t just go for the listener’s throat, but rather takes on a more corporeal assault. The album is dense and aggressive, spewing fire and venom from every angle and creating an environment that’s not just dark and ominous, but corrosive to the touch. And it doesn’t take particularly long until the magma is ejected from its core. First track “Flex” is a warning, its ambient backward drum fills and hums gradually rising in volume and tone as if to mimic the climb to the summit. But “Nolan” is where the violent reaction takes place, all distortion and abrasive frequencies, bass drums thumping and bells clanging just beneath the surface. It sounds like M83 gone evil, or Deafheaven’s Sunbather reinterpreted into an electronic piece. Indeed, it’s beautiful, but in a way that allows for all of its chilling menace to rise to the fore.

In addition to the much heavier use of percussion on the album, what separates A U R O R A from Frost’s prior work lies heavily in how much it grooves. On “Secant,” one of the best tracks of the bunch, Frost delves into a pulsing, hissing form of industrial that’s only a few shades more abstract than any of the highlights from The Downward Spiral. In any case, it certainly still sounds like it could fuck you (up) like an animal, all buzzing thrusts and sinister roars. Even more awe inspiring is “Venter,” which makes its slow ascent from apocalyptic tattoo into claustrophobic death rave. It’s almost a dance track — if dancing were necessary for survival.

From a distance, a title like A U R O R A feels almost counterintuitive when applied to an album that feels so dangerous. But like its namesake — Borealis or Australis — it’s breathtaking in its representation of something so destructive and terrifying. Just as these natural phenomena create a feast for the eyes via two-million-degree solar winds, so does Frost via textures and sounds that are by no means conventionally beautiful. His noises are sculpted and streamlined into patterns and forms that have a much stronger sense of order and structure than before, and that results in a thoroughly compelling clash. A U R O R A is chaos and terror made accessible.